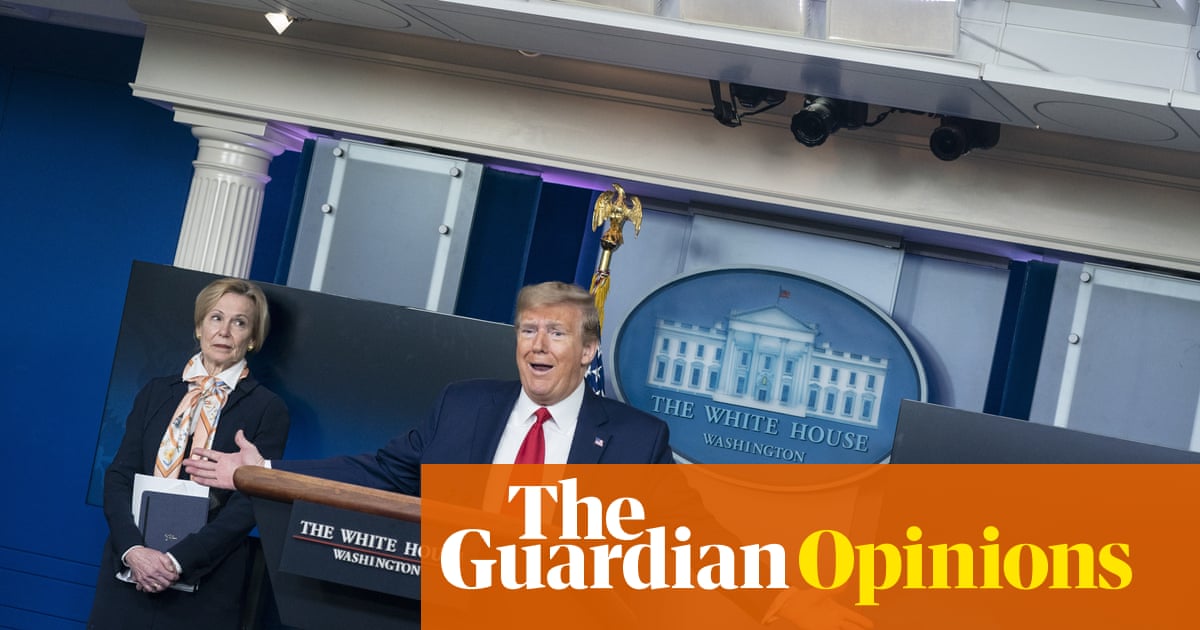 He bashed “Sleepy Joe” Biden. He railed against the Russia investigation and “fake people” in the media. He predicted that had he not been elected, the world might have ended.

And somewhere along the way, he talked about the coronavirus.

I was among an unlucky 13 reporters sitting in that room on Saturday, along with one standing at the back from Trump’s beloved One America News Network which, having flouted reporters’ agreed physical distancing guidelines, is there at the invitation of the White House.

Laptops on knees, with several seats between us to maintain physical distancing, we were hardly a typical Make America Great Again crowd. But tellingly, while there was no sign of Dr Anthony Fauci’s reassuring presence, the seats to Trump’s right included Mark Meadows, a vocal ally in Congress recently appointed White House chief of staff, and Kayleigh McEnany, the Trump 2020 campaign national spokesperson turned White House press secretary.

Both gazed up at their boss reverently and smiled at his jokes. Meanwhile Dr Deborah Birx, response coordinator on the coronavirus taskforce, stood on the podium and spent long periods staring expressionless into the middle distance as Trump reeled off some golden oldies.

Wearing a blue suit, white shirt and red tie, Trump added: “We have a big election coming up but I think we have tremendous momentum. First we get rid of the plague.”

Across the country, the Trump movement is stirring again. Protests against the “tyranny” of lockdown measures have featured Trump campaign regalia, Confederate flags, guns and placards such as “Social distancing = communism”. The Trump adviser Stephen Moore has compared the protesters to Rosa Parks, the civil rights activist arrested for refusing to surrender her seat on a crowded bus to a white passenger in Montgomery, Alabama, in 1955.

What did Trump think of that? “Well, there is a lot of injustice. When you look at Virginia, where they want to take your guns away, they want to violate your second amendment … I just think some of the governors have gotten carried away … It’s a strong statement but I can see where he’s coming from.”

As at a rally, he hymned the praise of his vice-president, Mike Pence, then went after Democratic senators who were on a call to Pence on Friday as “rude and nasty”, adding: “All you have to do is look at the big V for victory, or V for ventilator. Take a look at it. Everybody said they had us on that. They thought they had us but we got ’em done in numbers that nobody would believe.”

The comment suggested Trump viewed the race for ventilators as a political trap that he had managed to avoid, not a humanitarian emergency. But Democrats are also concerned about Trump’s you’re-on-your-own message to states when it comes to testing. He complained: “You hear so much about testing. What we’ve done has been incredible on testing.” And in a swipe at Barack Obama: “I inherited broken junk.”

No Trump rally is complete without him playing the victim – one sure to prevail heroically in the final act – and goading the media, usually a cue for his supporters to turn and and jeer the press pen. This time the president took aim at a reporter who was not in the room: Maggie Haberman of the New York Times.

“She’s a third-rate reporter,” he lamented, going on a long riff to make the baseless allegation that a Haberman story, which said Meadows had cried during meetings with White House staff, was motivated by “retribution”. Trump insisted: “He’s not a cryer.”

Extraordinarily, the president of the United States spent more time on this personal grievance against a journalist with whom he has a long history than on the unimaginable scale of death and grief across the nation. On the eve of the 25th anniversary of the Oklahoma City bombing, it was quite a contrast from the days when Bill Clinton was hailed the “consoler-in-chief”.

When Birx finally got her turn, she praised “the amazing work of the American people”, particularly in cities such as Detroit, to observe social distancing. But when she pointed to a graphic of international comparisons on screens behind the podium, Trump could not resist butting in and pointing to China’s claim of 0.33 deaths per 100,000 people (America’s is 11.24, the UK’s is 21.97). “Excuse me, does anybody really believe this number?” he demanded, later asking the same about Iran.

Operation reopen America: are we about to witness a second historic failure of leadership from Trump?

It was another cudgel with which to beat the media. “Why didn’t you people figure that out, though?” he demanded. Unfortunately for Trump, the Biden campaign had just released a video stating: “When Trump rolled over for the Chinese, he took their word for it. Trump praised the Chinese 15 times in January and February as the coronavirus spread across the world.”

The president ended the briefing-cum-rally as he began, talking about anything but the coronavirus. He attacked the Democratic congresswomen Ilhan Omar and Alexandria Ocasio-Cortez as having a “very strong anti-Israel bent”. He said of North Korea: “Look, if I wasn’t elected, you would right now – maybe the world – would be over.”

He added falsely, for good measure: “When I first came in, we didn’t have ammunition, not a good way to fight a war. President Obama left us no ammunition.” He declared that no one had been tougher on Russia’s Vladimir Putin than he has been and recycled old gripes about the Iran nuclear deal and Chinese tariffs.

With mendacity and menace, the 2020 election campaign was back under way. The president is eager to become a candidate again and move on. With nearly 40,000 Americans dead from the virus, perhaps no one should be surprised.