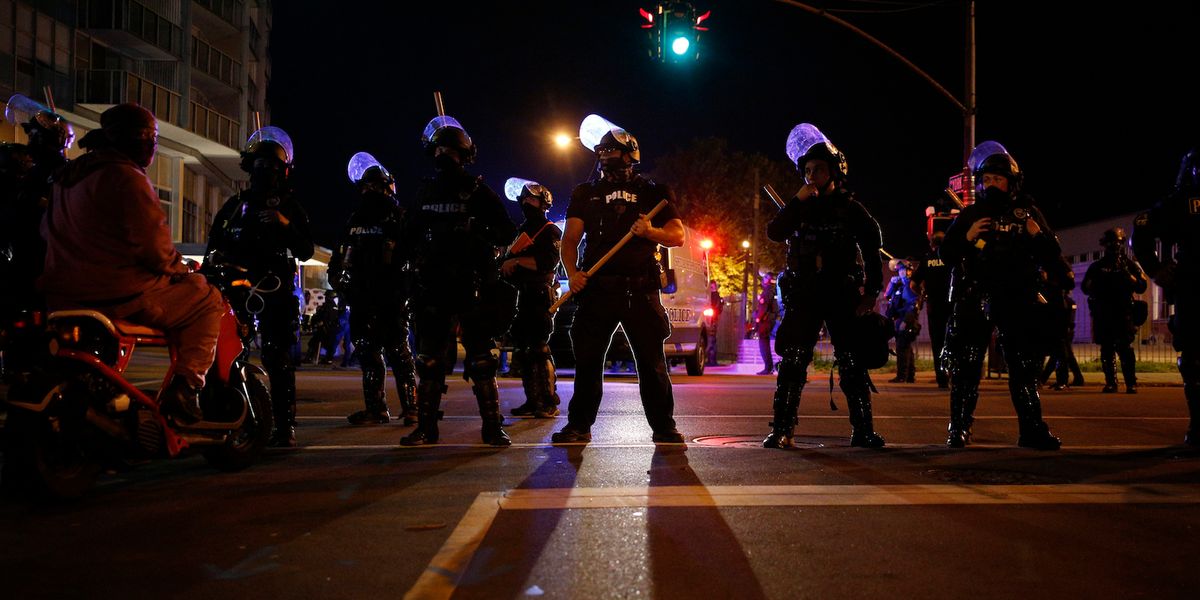 Protests in Louisville were less violent Thursday night, calming down significantly from the previous night, during which two Louisville Metropolitan Police Department officers were shot, the Courier Journal reported.

Thursday was the second night since the grand jury decision not to charge any officers for killing Breonna Taylor during a raid on her home in March. One former officer, Brett Hankison, was charged with three counts of wanton endangerment, related to his allegedly shooting recklessly into surrounding apartments — not to the fact that Taylor was shot and killed.

The Courier Journal reported that 24 people were arrested overnight Thursday, down from 127 the night before. Some of the arrests were for unlawful assembly and failure to disperse, and others, including a state representative, Attica Scott, were charged with felony rioting.

Local reports say protesters numbered in the hundreds, mostly marching through the city and chanting. Some protesters reportedly confronted armed militia members who said they had come to the city to protect property, but those confrontations did not escalate into violence.

Police say some businesses and buses were damaged by vandals. Social media videos show some protesters carrying bats and smashing windows. Louisville police indicated that only “several” marchers were involved in the vandalism. One person tossed a flare through a broken window at the library.

After the curfew, protesters took refuge in the First Unitarian Church, where church leaders were allowing people to gather on the property to avoid arrest. While police appeared to line up outside the church for some time, protesters were eventually allowed to leave after police concluded their investigation at the library.

“Contrary to rumors on social media, the LMPD, at no time, was waiting for ‘a decision from legal about whether or not they can storm the property,'” an LMPD Facebook post read. “No arrests were made for being on church property. No National Guard was deployed to address these issues. Officers remained at 4th and York in order to secure the area so maintenance could address the library windows that were broken and an arson investigation begun. Once that was complete, police left the area and protestors were given directions on how to leave the church and head home and were able to walk back to their vehicles.”

Louisville police declared a state of emergency earlier this week in advance of the attorney general’s announcement about charges against the officers, which foreshadowed a decision officials knew protesters would be unhappy with. The windows of some federal buildings had been boarded up, and in-person court hearings were changed to virtual meetings this week for fear of unrest.

Two police officers were shot Wednesday night. Police arrested 26-year-old Larynzo Johnson in connection with the shooting. Both of the officers, Maj. Aubrey Gregory and Officer Robinson Desroches, suffered non-life-threatening injuries. Johnson has been charged with two counts of first-degree assault of a police officer and 14 counts of wanton endangerment of a police officer.