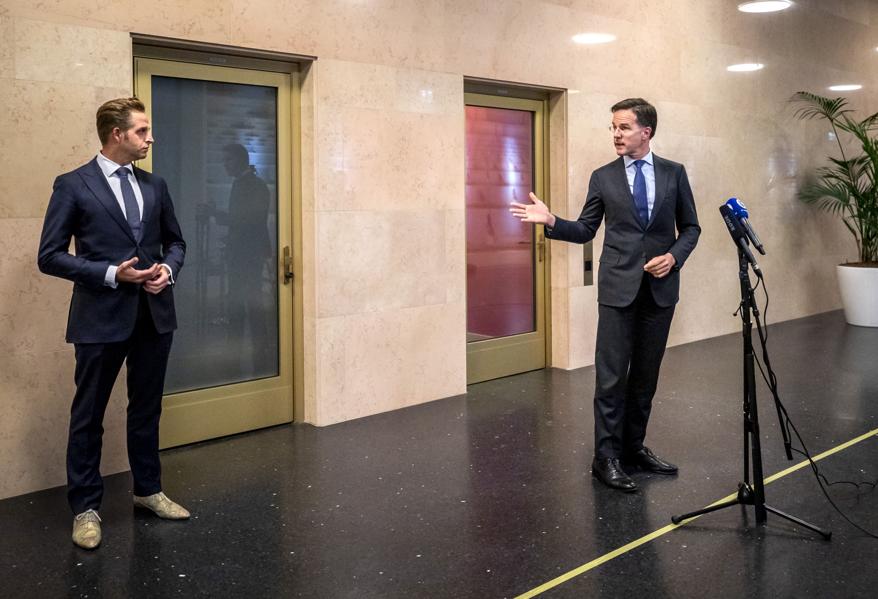 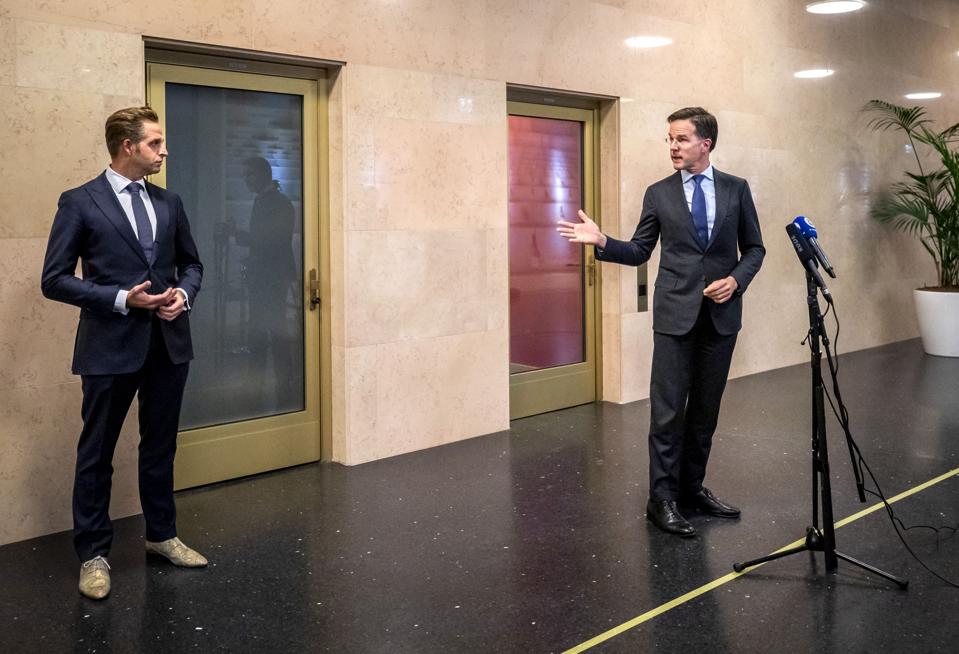 Dutch Prime Minister Mark Rutte (R) and Health minister Hugo de Jonge, Minister of Health, Welfare … [+] and Sport give a press conference after a consultation of the Ministerial Crisis Management Committee (MCCb) about the Covid-19 crisis, on March 25, 2020 in the Hague. (Photo by Remko DE WAAL / ANP / AFP) / Netherlands OUT (Photo by REMKO DE WAAL/ANP/AFP via Getty Images)

In a national address to the Dutch nation on Monday, March 16th, Prime Minister Mark Rutte said his country would aim to develop immunity to the novel coronavirus among its population by allowing large numbers to contract the illness at a controlled pace.

Initially, creating herd immunity for the novel coronavirus was one of two main objectives of Dutch government policy: Controlling spread of the virus while protecting vulnerable groups, including the elderly and people with underlying health conditions. By striking this balance rather than instituting a national lockdown, the thought was the nation could avoid a situation in which post lockdown – when society returns to normal – it would be exposed to the danger of a new outbreak as too few people would have become infected and therefore immune.

Faced with a pandemic as potent as Covid-19, a major problem with the herd immunity approach is that the disease has killed or made seriously ill a number of people under 60, some of whom had no serious underlying health conditions. Additionally, the approach suffers from a logistical near impossibility – the ability to separate older adults from potentially contagious younger people. Moreover, there’s the problem of not knowing whether immunity occurs after infection with the novel coronavirus, and the duration of that immunity.

In the past week, Rutte has since walked back the herd immunity policy line by introducing what could be characterized as lockdown light. The Dutch government says it is imposing similar restrictions to the ones its neighbors and other European countries have instituted. It has closed schools and universities, ordered bars and restaurants to mostly shut and told people to work from home as much as possible. The country has not issued a shelter in place order to citizens and residents, or imposed travel restrictions within the country.

The country’s pragmatic balancing act doesn’t appear to be working as well as intended. The numbers released by the Dutch RIVM (National Institute for Public Health and the Environment) are not especially encouraging. As of Friday, March 27th the country has a total of 8,603 confirmed cases, with 1,172 new cases in the past 24 hours; 546 total deaths, with 112 new deaths in the past 24 hours. There are at least 761 patients in serious or critical condition, with thousands more hospitalized. RIVM is reporting that numbers of new patients admitted to hospital and intensive care are rising less rapidly than previously this week, but they’re still increasing.

While Covid-19 hasn’t wreaked nearly as much havoc in the Netherlands as in Italy and Spain, it’s still conspicuous that a healthcare system as finely tuned and well coordinated as the Dutch system would have such alarming numbers in terms of mortality and morbidity.

The confirmed case fatality rate in the Netherlands of 6.3% stands in stark contrast to its neighbor Germany’s 0.6%. The Netherlands, with a younger overall population and one that is almost 5 times smaller than Germany’s, has 60% more deaths. And, unlike Germany, the Dutch haven’t done widespread testing, so it’s likely its number of confirmed cases significantly underestimates the actual number of infections.

While the number of confirmed cases in Germany is large, partly due to its testing campaign, the case fatality rate and overall death toll have been relatively small, compared not only to Holland, but also almost all other European nations. Similarly, the numbers of patients in serious or critical condition have remained very low.

Both the German and Dutch healthcare systems are relatively well-funded, and score well internationally on population health indicators, such as life expectancy and morbidity. Yet, thus far, the impact from Covid-19 in Holland has been worse. It has led to a situation in which the Netherlands now faces the real possibility of an impending shortage of intensive care units. Germany officials have said they’re prepared to accept Dutch Covid-19 patients. Specifically, the German city of Aachen’s University Clinic, which has strong ties with the medical center affiliated with the University of Maastricht in the Netherlands, has pledged to cooperate. Aachen’s University Clinic has made similar arrangements for a number of severely ill French and Italian patients.