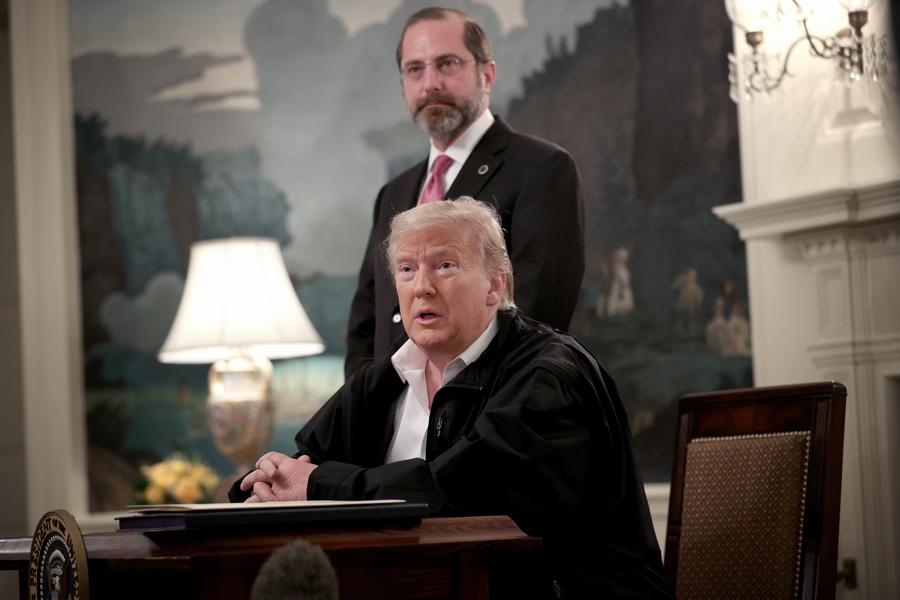 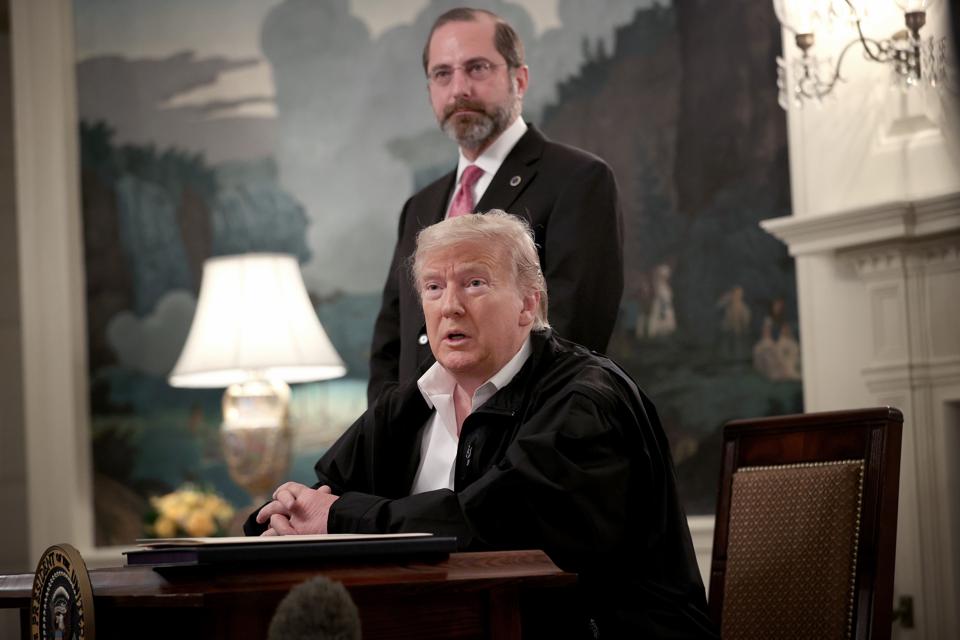 President Donald Trump, with HHS Secretary Alex Azar after signing an $8.3 billion aid bill to … [+] combat the coronavirus on March 6, 2020. On Friday, the World Health Organization urged governments to unleash their full power against COVID-19. (Photo by Win McNamee/Getty Images)

It won’t look this bad for long.

The U.S. currently has the highest mortality rate among new coronavirus COVID-19 patients due to a low number of actual confirmed cases, and a high number of elderly who passed away recently in the state of Washington.

All told, the U.S. has 238 people that tested positive, of which 8 have recovered and 14 have died, all but one in Washington state.

It’s not because the coronavirus in the U.S. is any stronger than it is anywhere else in the 70+ nations that now have it. It’s that the level of testing here has been slow resulting in a small number of confirmed cases compared to the number of deaths. That means the mortality rate here is higher than it is in Hubei province, the epicenter of the new coronavirus. The U.S. mortality rate is currently 5.9%. In Hubei, it’s 4.3%.

The U.S. does not yet have the capacity to test at the levels South Korea is currently testing at, which is over 10,000 patients a day. South Korea’s mortality rate, meanwhile, is just 0.6%, which is on par with influenza, a disease that infects millions each year.

“Because this is a new coronavirus, we are in a period of uncertainty,” says Winnie Chi-Man, professor of global health policy and economy at Harvard’s School of Public Health. “There is no deterministic response. That’s the reality. People have to trust the government will get this right.”

The fast rising death toll lit a fire under Congress to act: legislators passed an $8.3 billion aid bill signed by President Trump on Friday. He had initially only asked for $2.5 billion.

The $8.3 billion package includes $7.8 billion in discretionary appropriations, plus $500 million for Medicare. 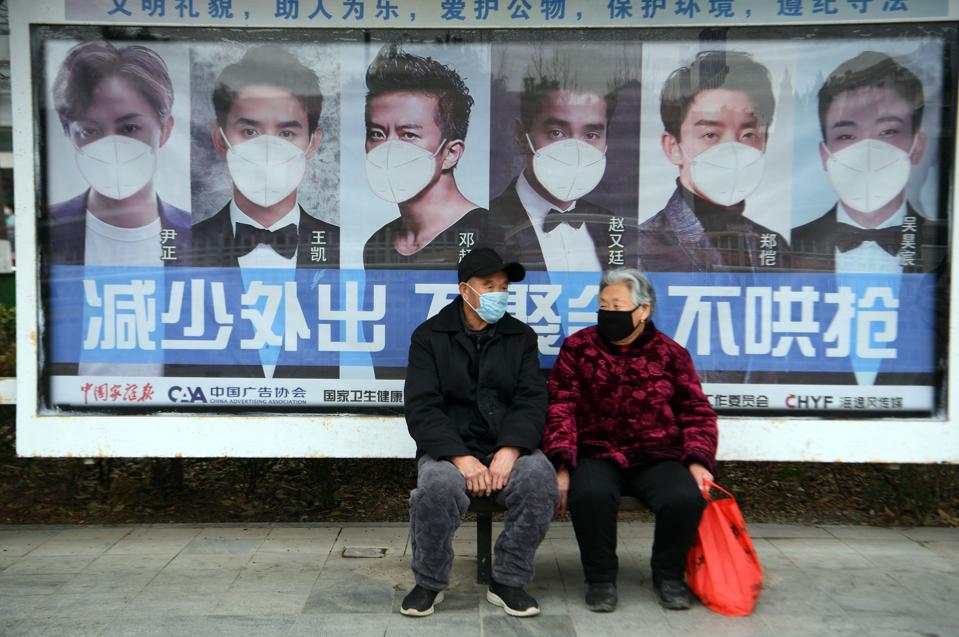 A man and woman sit in front of a poster reminding citizens to wear face masks as a preventive … [+] measure at a bus stop in Bozhou, in China’s eastern Anhui province on March 6, 2020. New infections in China are in decline. (Photo by STR / AFP) / China OUT (Photo by STR/AFP via Getty Images)

The money will also be spent on research and development for medication, support for state and local governments currently playing catch-up to with the virus, and assistance for small businesses impacted by loss of revenue, CBS News reports.

The virus is spreading like wildfire outside of China. Its rapid spread through Italy roughly 12 days ago, and contagion on board two Princess Cruise ships, clearly caught the U.S. off guard.

The U.S. banned flights to China in early-February, with Delta, United and American all suspending air travel to China and Hong Kong. All cases in the U.S. at the time were people who had traveled to China, particularly Wuhan, the capital city of Hubei. All of those people have recovered.

But then Italy went from around 20 cases to hundreds in a 24 hour period two weekends ago. Cruise ships were caught flat footed as well, becoming petri dishes for the virus to spread. 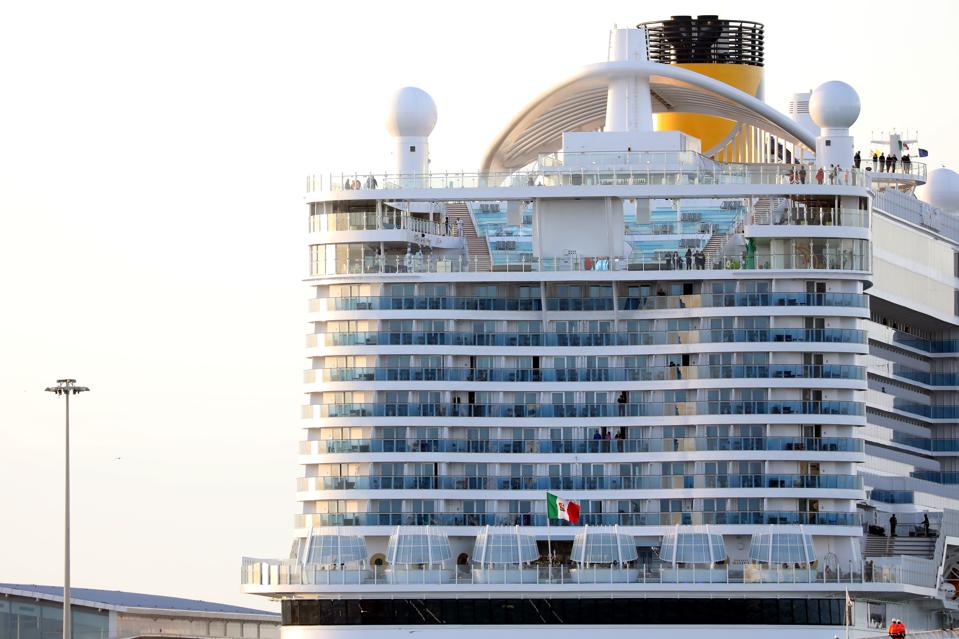 Cruise ships like this one by Carnival Cruiselines, coupled with an algae bloom of coronavirus cases … [+] in northern Italy have led to the rapid spread of the disease in the U.S. Photographer: Alessia Pierdomenico/Bloomberg

A poll by French firm Ipsos showed that 37% of Americans now view this is a severe threat to the country, up from 28% just two weeks ago.

In another Ipsos survey taken late February, four out of five Americans agreed that cities and states should be quarantined in case of an outbreak. 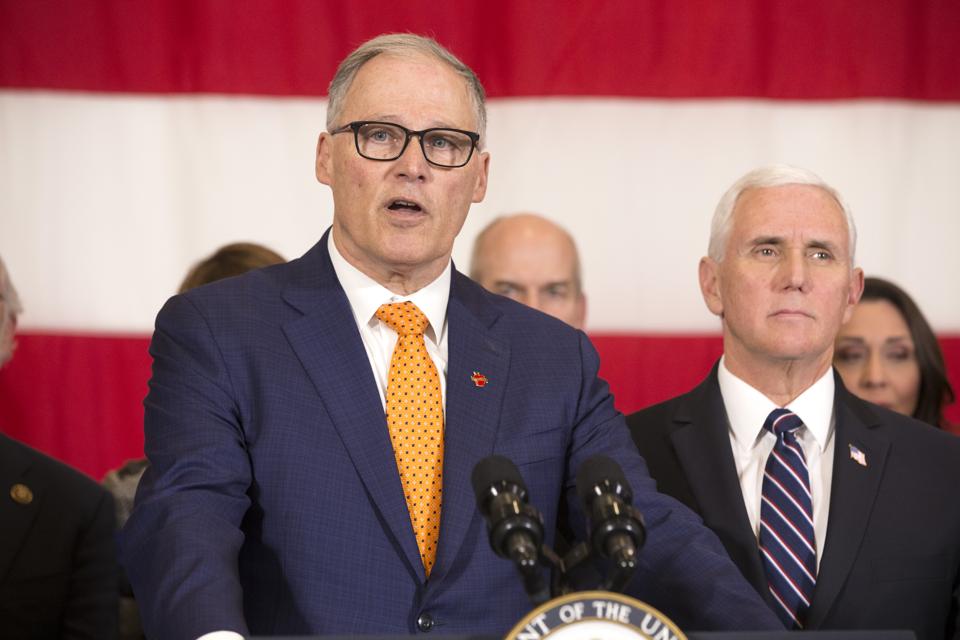 Washington State Governor Jay Inslee addresses the press during a visit by Vice President Mike Pence … [+] to discuss concerns over the coronavirus death toll there on March 5. (Photo by Karen Ducey/Getty Images)

An online petition to cancel the popular tech conference SXSW in Austin this month is making the rounds. Facebook, Twitter, Netflix and Apple said they will not be sending any staffers there.

Due to numerous flight cancellations, United Airlines said this week that it will reduce its international flight schedule by 20%. Domestic flight schedules will be reduced by 10%. They are offering unpaid leave of absence and freezing bonuses for non-union employees.

In New York, over 2,500 people were instructed to self-quarantine as health officials test people who had contact with local coronavirus patients. At least 22 have tested positive and are in isolation.

In California, health officials said Thursday that more than 9,700 returning travelers from Europe and cruise ships were told to stay home and monitor their health. Governor Gavin Newsom declared a state of emergency after an older woman from Sacramento likely contracted the virus on a cruise ship and died.

MSCI’s stress testing of U.S. securities under the influence of the COVID-19 coronavirus points to a further 22% correction in U.S. equities.

“The speed of the market repricing has obviously been dramatic, however markets have only gone from pricing in no risk of anything to a moderate risk,” Mike Riddell, a fund manager for Allianz Global Investors told Bloomberg today. “If global data really tanks in the coming weeks and months, investors will realize that central banks can’t cure coronaviruses and markets…are still ripe for a correction.” 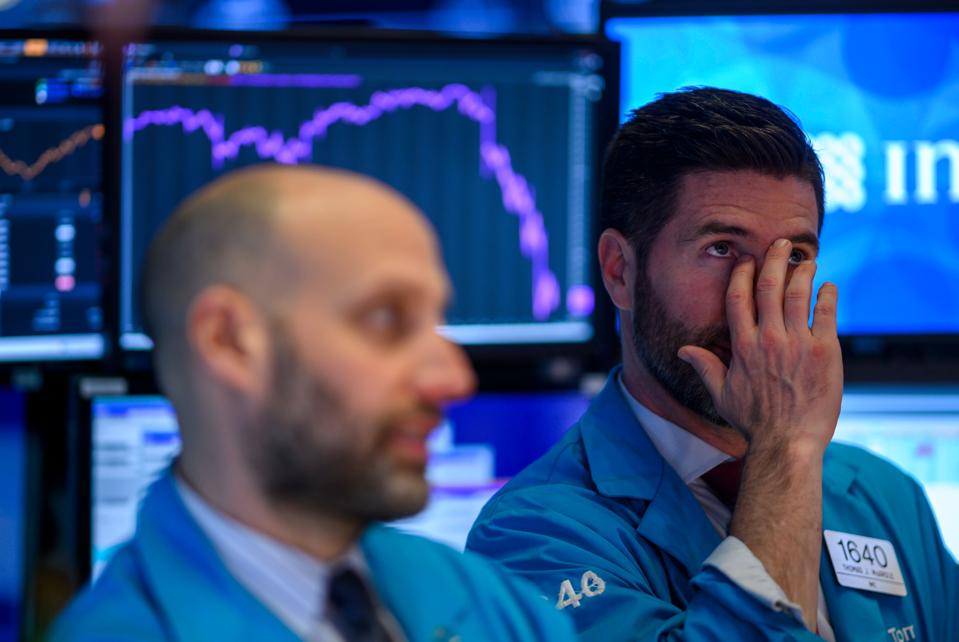 Treasury yield down. Stocks down. Investors think the U.S. is behind the eight ball on containing … [+] the spread of the coronavirus, with many market participants expecting at least as many cases here as there are in Italy. (Photo by JOHANNES EISELE/AFP via Getty Images)

His view depends on what investors are pricing in for economic data. For now, contraction in the U.S. ranges from a soft 0.1% to 0.3% annually, depending on who is asked. In Italy, it’s 0.5%. In China, it’s between 0.5% decline to a 1% decline, which would take GDP under 5% for the year.

Assuming the virus spreads quickly here, that would weigh on corporate earnings to the extent that job creation and unemployment would be negatively impacted, says Agathe Demarais, global forecasting director for The Economist Intelligence Unit. “That hits consumer spending, the only source of growth in the U.S.,” she says.

Investors are pricing all of this in, within different degrees of bad case and really bad case scenarios.

“In every country this disproportionately effects the elderly or people with pre-existing health conditions,” says Brendan Ahern, CIO of KraneShares, looking for a silver lining. “The U.S. implemented travel restrictions to China and that helped, but South Korea, Italy and Iran did not and they got it. Investors eventually will go back to discerning who are the winners and who are the losers in all this,” he says.

The Italian death rate is now 3.8%, not far from China’s mortality rates outside of Hubei.