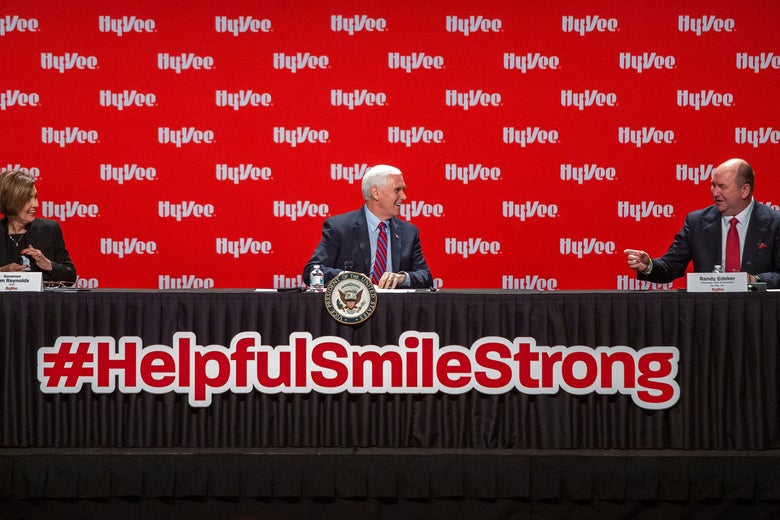 Slate is making its coronavirus coverage free for all readers. Subscribe to support our journalism. Start your free trial.

Mere hours after Vice President Mike Pence’s press secretary tested positive for COVID-19, he was set to meet with a group of food industry executives who had gathered for a roundtable discussion in West Des Moines. But before Pence joined them on the stage, someone came in and asked all five guests to remove their masks, which they all did dutifully, reports the Intercept, which posted a segment of the live video stream of the event that showed the sequence of events. “The strange request underscored just how committed the White House is to ignoring federal health advice intended to slow the spread of the pandemic coronavirus,” notes the Intercept’s Robert Mackey.

This is, of course, hardly the first time Pence’s seeming insistence on not wearing a mask has raised eyebrows. Pence refused to wear a mask at the Mayo Clinic in Minnesota, claiming it wasn’t necessary because he was tested regularly. Later he acknowledged he should have worn a mask. “I didn’t think it was necessary, but I should have worn the mask at the Mayo Clinic,” Pence said.

Pence didn’t wear a mask during his events in Iowa that were intended to encourage economies to start returning to normal. But throughout the day there were clear signs that everything continued to be far from normal. Before the event in which the executives were asked to remove their masks, staffers wearing gloves and masks took the temperature of people who entered the building. And even though members of the audience did appear to be staying apart from each other, video showed that few were actually wearing masks.

The events of Friday illustrate just how the question of whether to wear a mask or not has become a political statement across the United States. Even as health care officials encourage people to wear masks, those who think that the coronavirus threat is overblown are getting clear signals from some of the country’s leaders, including President Donald Trump, that it’s OK not to wear one. That tension has even led to violence in a few places as people who refuse to wear masks have confronted employees at stores that demand everyone put one on. Ultimately, “the president is not just failing to model good behavior,” writes Mackey, “he is actively discouraging it.” As of Sunday afternoon, the coronavirus had killed almost 80,000 people across the United States.