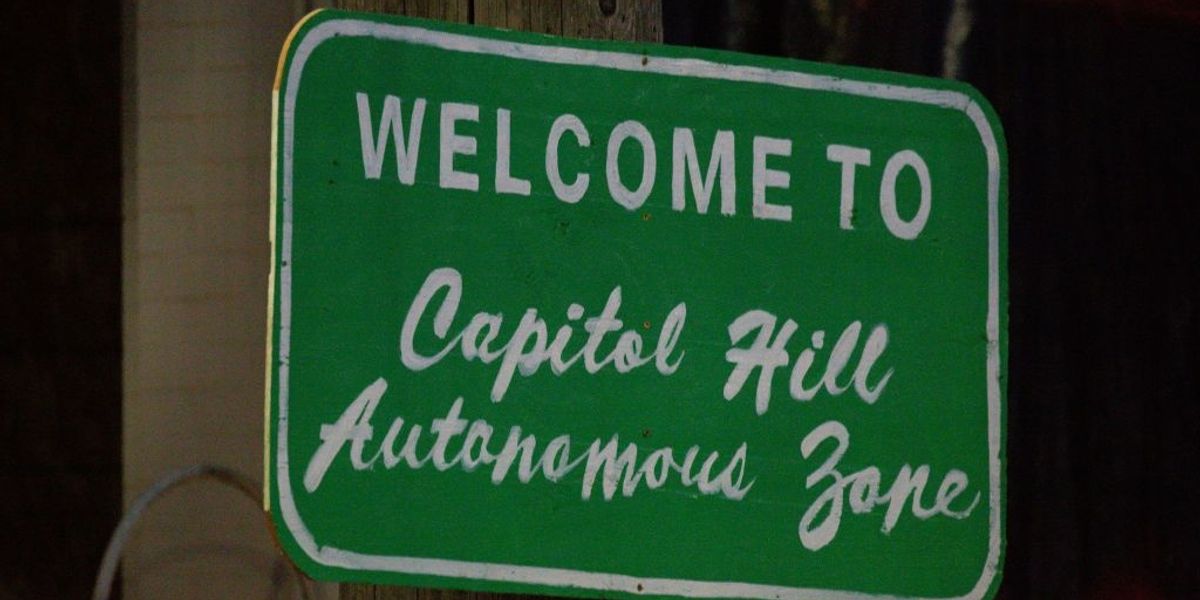 Early Saturday morning, two men were shot in Seattle’s Capitol Hill Autonomous Zone, one later died from his gunshot injuries. One of the prominent leaders of the CHAZ is enraged that Seattle EMT’s refused to enter the autonomous zone, but emergency officials explain why medics didn’t enter the “self-governed” area.

A Seattle rapper named Raz Simone is allegedly one of the leaders of the CHAZ. Simone gained national notoriety following the George Floyd protests after he was one of the early organizers of the autonomous zone in Seattle.

He was labeled as a “warlord” by many after video emerged of him screaming, “This is war!” into a megaphone and ordering “armed paramilitaries to guard the barricades in shifts.”

The City Journal said the AK-47-wielding activist was “filmed allegedly assaulting multiple protestors who disobeyed his orders, informing them that he was the ‘police’ now, sparking fears that he was becoming the de facto warlord of the autonomous zone.” Simone has since denied that he is a “warlord.”

Following Saturday’s shooting inside the Capitol Hill Organized Protest area, Simone fired off an angry tweet attacking Seattle medics for not venturing into the autonomous zone to help the shooting victims.

“Medics refused to help even after people in the CHOP begged,” Simone tweeted. “They let our bro bleed out for 30 minutes till he died. F*** politics. F*** your currupt system.”

The Seattle Fire Department released a statement explaining why the emergency medical technicians did not enter the CHAZ.

“On June 20, 2020 at approximately 2:19 a.m., 9-1-1 received reports of a shooting at 10th Ave and E. Pine St. SPD officers responded to the scene and SFD dispatch was notified,” the statement read. “Between 2:26 and 2:28 a.m. SPD officers staged at 12th Ave and Cherry St. and initially entered the scene but were unable to secure the location for SFD medics.”

The Seattle Fire Department said they “needed SPD presence to enter the scene” to ensure the safety of the medical technicians.

“Due to SFD’s existing policy of staging and requesting law enforcement to first secure the scene before entering for scenes of violence, SFD units staged at Broadway and Pine St. at 2:25 a.m.,” the Seattle Fire Department stated. “This is a standard procedure for any scene of violence and is also currently in place for any fire and medical emergency inside the area deemed the CHOP due to firefighter safety.”

Both shooting victims received medical attention from volunteer CHOP medics, and were transported to the Harborview Medical Center, where one man was pronounced dead, and the other was said to be in critical condition.

Residents of the CHAZ attempted to block entry to Seattle police officers who wanted to help the shooting victims and get them medical attention by securing the area for the SFD. Seattle police entered the CHAZ between 2:26 and 2:28 a.m., but were told to leave the autonomous zone because the first victim was already taken to the hospital. CHOP inhabitants created a human wall to prevent the cops from advancing.

“Officers attempted to locate a shooting victim but were met by a violent crowd that prevented officers safe access to the victims,” a statement from the Seattle Police Department read. “Officers were later informed that the victims, both males, had been transported to Harborview Medical Center by CHOP ‘medics.'”

The Seattle Police Department shared a video of the shooting scene as well as bodycam footage of cops entering the CHOP, where they were greeted by a mostly aggressive crowd.

There was reportedly a fight between numerous people inside the CHAZ before the shooting, according to Post Millennial editor-at-large Andy Ngo.

Seattle’s Democratic Mayor Jenny Durkan recently said that the Capitol Hill Autonomous Zone “is not a lawless wasteland of anarchist insurrection – it is a peaceful expression of our community’s collective grief and their desire to build a better world.”