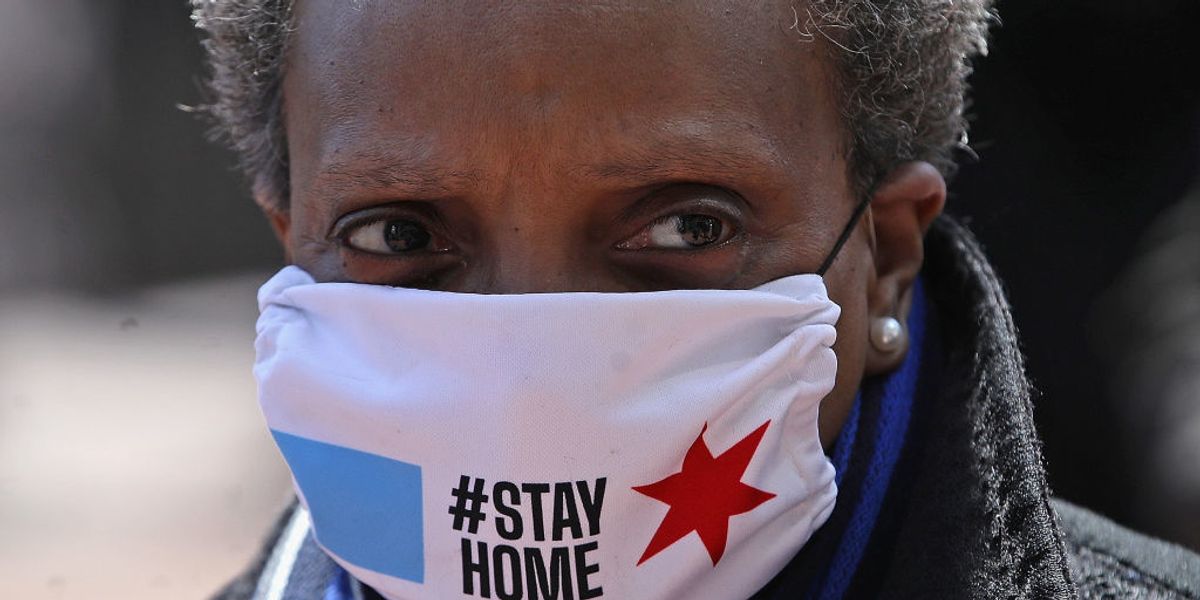 Chicago Mayor Lori Lightfoot threatened to issue citations and even arrest anyone who violated stay-at-home orders. Lightfoot issued a strong warning to her constituents who don’t comply with the lockdown orders during a COVID-19 press conference on Saturday.

“We will shut you down, we will cite you, and if we need to, we will arrest you and we will take you to jail,” Lightfoot said. “Don’t make us treat you like a criminal, but if you act like a criminal and you violate the law and you refuse to do what is necessary to save lives in this city in the middle of a pandemic we will take you to jail, period.”

Lightfoot said that compliance with the stay-at-home order has gone down from 82% to 77% over the last week.

“This frankly doesn’t come as a surprise, given the warm weather. We’ve all been cooped up. We all miss our friends, and we all want to go outside and gather in groups,” Lightfoot said. “However, those aspirations simply cannot become a reality in the middle of a pandemic.”

Lightfoot also addressed the numerous house parties that have grabbed headlines in the past week, including one shindig that allegedly had 1,000 people.

“When you go out and party, when you go home to your momma, your grandma, or anybody in your household who has an underlying medical condition, you are bringing death to their doorstep,” Lightfoot said.

Lightfoot said Chicago police broke up several social gatherings between 50 and 150 people on Friday night. She added that the authorities were tipped off to at least six parties that were scheduled to happen on Saturday night.

“If you host a party, promote a party, or go to a party, we are not playing games. We mean business, and we will shut this down one way or another,” the Democratic mayor said. “The time for educating people into compliance is over. Don’t be stupid. We’re watching you, and we’re going to take decisive action.”

“Your actions are going to make a difference between whether or not we get out sooner or later, whether or not we have a summer or we do not,” Lightfoot said. “It’s absolutely essential that we stay the course and people stay home.”

CPD Superintendent David Brown said on Saturday, “We’ve lost officers to COVID-19, we’ve lost firefighters to COVID-19. They’ve given the ultimate sacrifice, willing to risk their lives, to save all of us. For a silly party, you are risking first responders’ lives.”

“We have given enough warning. We’re getting to the point where we’re trying to save lives and if our message is not resonating with people who are promoting parties, or coming out to parties, we have to take that next level of enforcement to make sure that we save lives,” Brown said.

After her news briefing, Lightfoot and police officers patrolled the streets and ordered a group of young kids to go home. One young man responded: “Y’all need to find a cure. You talk about going home. You go home.”

In early April, Lightfoot faced backlash and was called a “hypocrite” after photos revealed that she had gotten a haircut during the lockdown. The Chicago Department of Public Health issued a shelter-in-place order on March 18 and Lightfoot issued a stay-at-home order that shut down all non-essential businesses, such as barbershops and salons, on March 21.

On April 4, Lightfoot’s stylist posted photos with the mayor on Facebook with the caption: “I had the pleasure of giving Mayor Lightfoot a hair trim.” In the photos, the two women are not social distancing and neither, are wearing face masks. The stylist is not wearing gloves in the photo.

Lightfoot defended her actions, which violated her own city’s orders, by saying: “I’m the public face of this city. I’m on national media and I’m out in the public eye.”

“The woman who cut my hair had a mask and gloves on so we are, I am practicing what I’m preaching,” Lightfoot said.

This is the same city that last month released nearly a quarter of its prisoners from Chicago jails, many of which were released because of coronavirus fears.

“On cases we agree on, we’ve gone into court together and asked for a release. On cases where we disagree, we go before a judge and present our evidence for the courts,” Cook County State’s Attorney Kim Foxx said. “We’ve been able to reduce the jail population in the course of four weeks by almost 25 percent.”

Illinois Gov. J. B. Pritzker (D) said on Monday, “We’ve overall reduced the population in our prisons by more than 1,300. Many of those were near the end of their terms or actually their sentences were up. But also many of them were under this program of either medical furloughs due to COVID-19 or other reasons.”

The Illinois Department of Corrections said they had released nearly 4,000 state inmates since March 1. There have been 304 inmates and state corrections staff who were confirmed to have been infected by the coronavirus since the outbreak started.

Illinois has the fourth-most confirmed coronavirus cases in the U.S. with over 58,500 and 2,559 confirmed COVID-19 deaths.