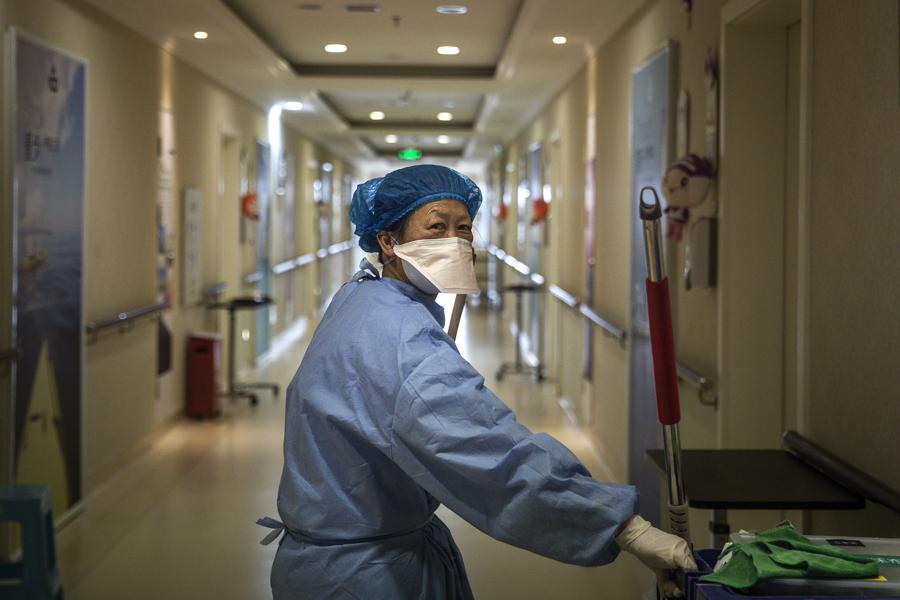 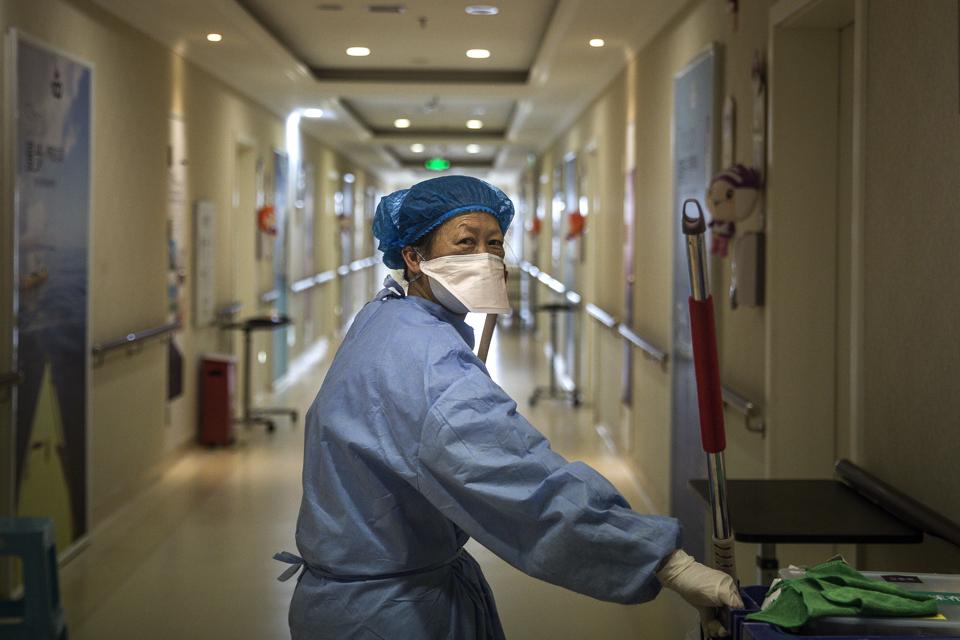 A cleaner wears a mask as she works at a hospital on March 12, 2020 in Wuhan. Flights, trains and … [+] public transport including buses, subway and ferry services have been closed for almost two months. (Photo by Getty Images)

On Wednesday night, President Trump finally took the coronavirus COVID-19 seriously. He banned all travel to EU countries for 30 days.

The disease may seem benign to some. Around 95% or more of the people who get it will survive and symptoms are generally mild and far from scary. But what is scary is how fast it spreads. And there are too many unknowns about the disease to find comfort in the fact that less than 1,000 people have it.

China went from 1,000 patients to 80,000 in a matter of roughly six weeks, mostly all of it in a self contained, quarantined state called Hubei.

Italy went from around 20 cases two and half weeks ago to over 12,000. It is now the Hubei of the Western world.

Travel bans on China helped mitigate spread from travelers coming to the U.S. from there. All early cases last month were from China travelers. They have since healed.

The U.S. was caught flat footed by Europe, cruises, and European business travelers at major conferences. The U.S. is now playing catch-up in the mitigation phase.

Trump reiterated what the World Health Organization said this week, calling the coronavirus a global pandemic.

We are probably one sick politician, or one more circuit-breaker on the Dow away from declaring a national emergency, forcing the NYSE to close.

“When people don’t want to go out to crowded events you start to wonder if fear begets more fear. We are seeing a lot of that now,” says Patrick Healey, founder and president of Caliber Financial Partners in Jersey City, N.J. “Until you see fewer cases in Europe, I’d be worried. The threat of spread is greater there than it was in China,” he says, citing France, Spain, Germany and the U.K.’s slow response to the crisis. 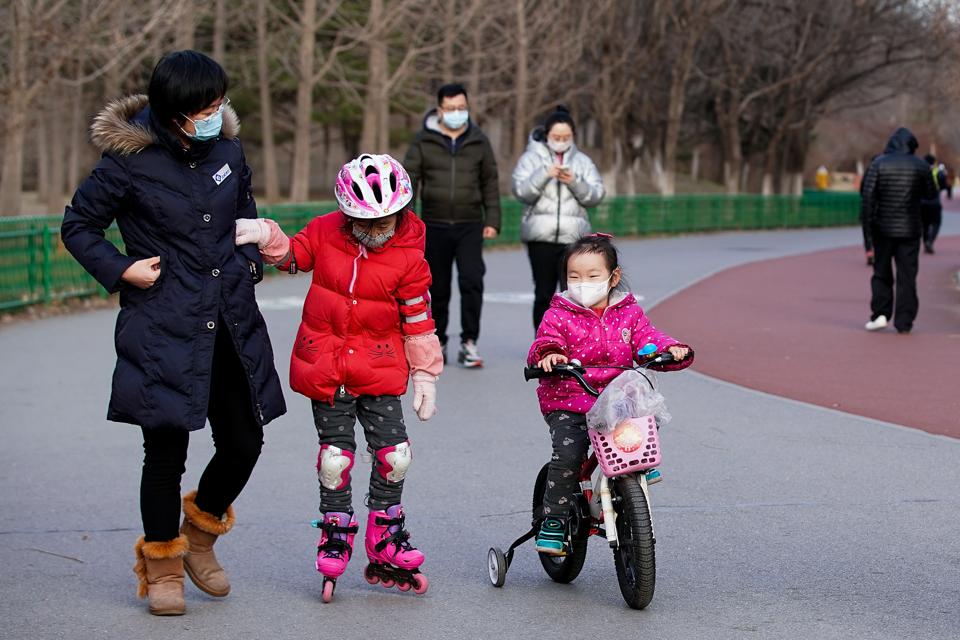 Italy was about two weeks too late, but at least they are doing something to save Europe. They shut themselves off. This is literally a “stop the world I want to get off” moment. Italy took the China approach. They put themselves on lockdown.

The U.S. has two fairly solid case studies with how to respond to COVID-19. One is the China path of lockdowns and forced quarantining, coupled with massive stimulus.

The other model is South Korea’s massive free testing and treatment, which also corralled the disease and kept infection rates low. Mortality rates are even lower at just under 1%.

A hybrid model of both seems to be best: lockdown clusters of the virus. Test like crazy.

China is healing. It’s already got its stimulus plan lined up. 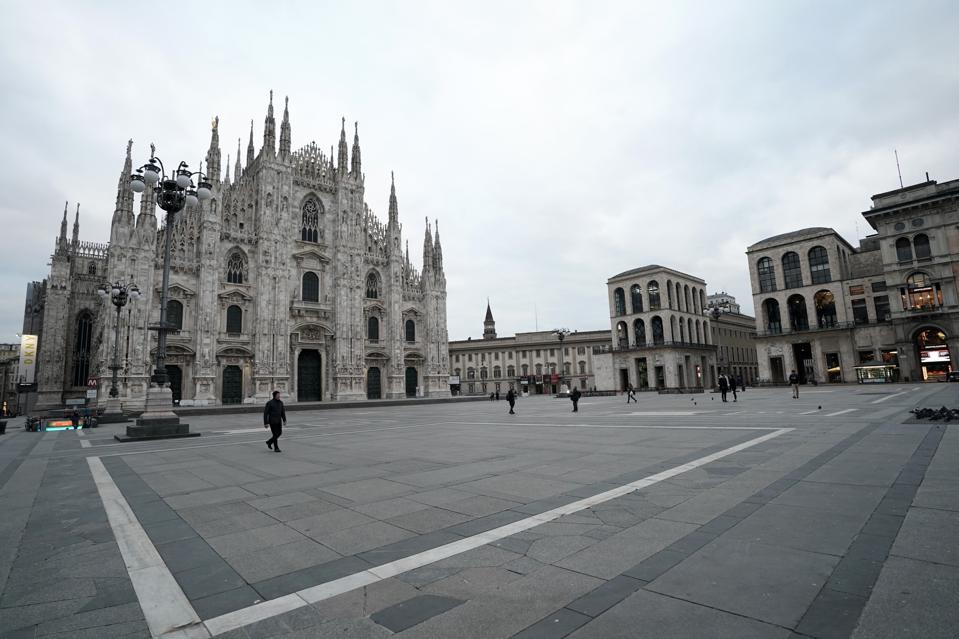 Italy is closed. They have taken a China approach to travel bans and quarantine. They acted late on … [+] bans to China, which led to the outbreak at home. (Photo by Vittorio Zunino Celotto/Getty Images)

“The China approach has worked. It’s been a draconian clampdown and takes away quarterly growth,” says Philipp Carlsson-Szlezak, chief economist for Boston Consulting Group in New York. “The high frequency data in China, the proxies for movement for goods and people, all of those see a nice pick up. And the infection rate curve of new cases in South Korea has bent downward. Just hope we don’t see any worsening outbreaks.”

By slowing the spread of the virus, which includes potential spreaders who came from high risk countries like Italy, China, South Korea and Iran, buys healthcare officials time. It keeps hospitals from being overwhelmed, which is what is happening now in Italy.

A nearly three month lockdown of Hubei, the epicenter province, means Hubei now officially has less infections than Italy. The number of new patients in China’s “ground zero” has slowed to double digits, instead of thousands three to four weeks ago.

Eventually, South Korea may also be forced to implement a version of the lockdown model to stop the spread of infection after someone working in a call center tested positive for the disease. 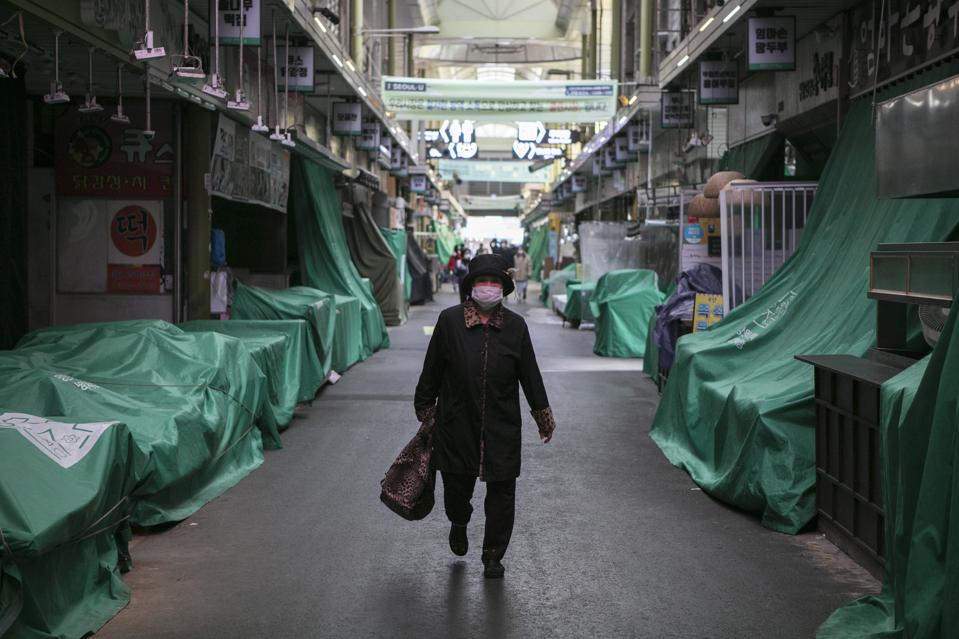 Closed stores in Mangwon Market on March 12 2020 in Seoul. The South Korean government raised the … [+] coronavirus alert to the “highest level” as confirmed case numbers continue to rise across the country. (Photo by Woohae Cho/Getty Images)

Without any firm facts on transmission, the risk of spreading the disease without showing signs of it are high.

As a result, China has maintained strict control of peoples movements in major cities. The South Korea testing model is harder for China due to its massive, urban population, which is why it is so important to keep those cities fairly inoculated.

From on the ground accounts in Beijing, that inoculation requires school closures, no movies, no malls, no non-essential businesses open and most bank branches closed.

In China, face masks must always be worn or else you can’t ride in taxis, take public transportation, or enter any business. Temperature readings are mandatory upon entering an office building. People with slight temps get sent straight to quarantine, according to sources there.

Entire neighborhoods are blocked off to non-residents, with security personnel patrolling to check for proof of residence.

Apartments housing someone with the coronavirus are forced into quarantine. No one can leave.

Beijing has under 200 cases today. Shanghai has under 30, according to Johns Hopkins University data.

“We just can’t impose a China style quarantine, but corporations can impose a work from home policy. You can cut off work travel and that is already happening,” says Brendan Ahern, CIO of KraneShares, who is working from home on Thursday. “Corporations here are acting pretty quickly.”

NBA has canceled its entire season. The NHL put the rest of its season on hold. Major League Baseball is thinking of postponing opening day. The BNP Paribas Tennis Open was canceled, scheduled for this week in Indian Wells. Coachella, the outdoor indie rock event, was postponed. Broadway has postponed shows for a month. Private colleges are sending kids home for the semester. Princess Cruises isn’t setting a course for adventure for the next 60 days. 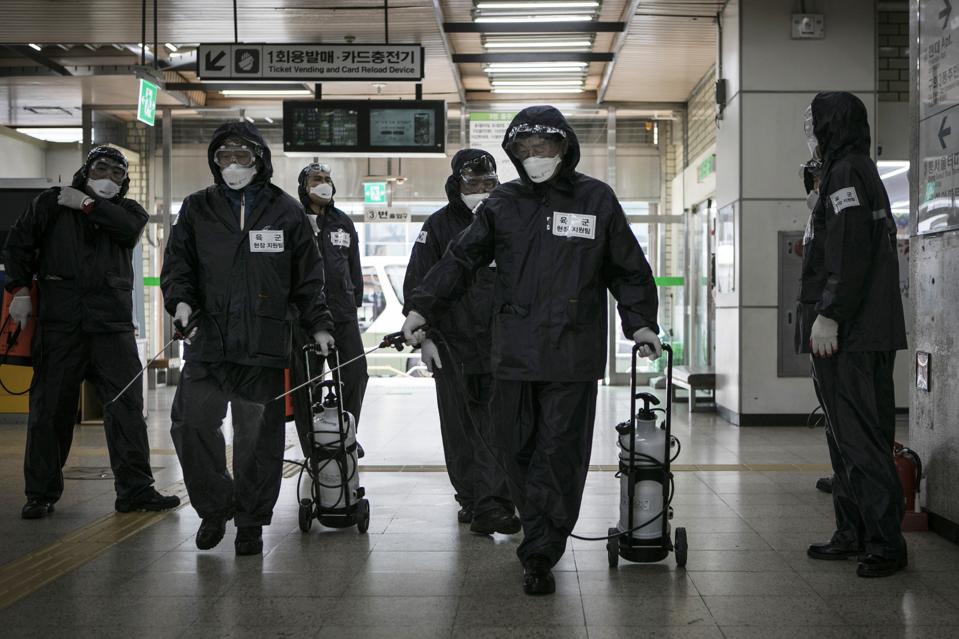 Members of the Sout Korean Army Reserve forces spray antiseptic solution to guard against the … [+] coronavirus at a metro station on March 12, 2020. New York state called the National Guard to New Rochelle this week. (Photo by Woohae Cho/Getty Images)

If the U.S. is dragged reluctantly into a South Korea/China lockdown model, it would usher in a further drop in economic activity. Mega stimulus will be only thing keeping it alive.

It is unclear if Republicans and Democrats can work together on this, as some may see a destroyed economy as a way to finally get rid of Trump in 2021.

“You’ll have the market constantly repricing and mispring,” says Nancy Perez, a fund manager at private equity firm Boston Private in Miami. “Both political parties will have to take this on. No party wants to be blamed for not doing something.”

To offset the drag, fiscal stimulus is necessary to make sure companies can meet payroll and rollover debts, preferably at no interest directly from the Fed.

Disaster relief legislation from Congress can draw on the unlimited checkbook of the Fed to help keep individual, corporate, and even municipal bankruptcies from soaring.

“I’m looking at dozens of companies in the S&P 500 right now that can literally go bankrupt if the government doesn’t act together on this,” CNBC star Jim Cramer said on Squawk Box this morning. “The government should not be collecting any cash right now.”

Quarantining a city like New York would represent a significant tax on all business activity. Administration talk of a payroll tax cut is not enough. Bold tax cuts and deferments would be best. For Cramer, a tax holiday for six months or longer is even better. 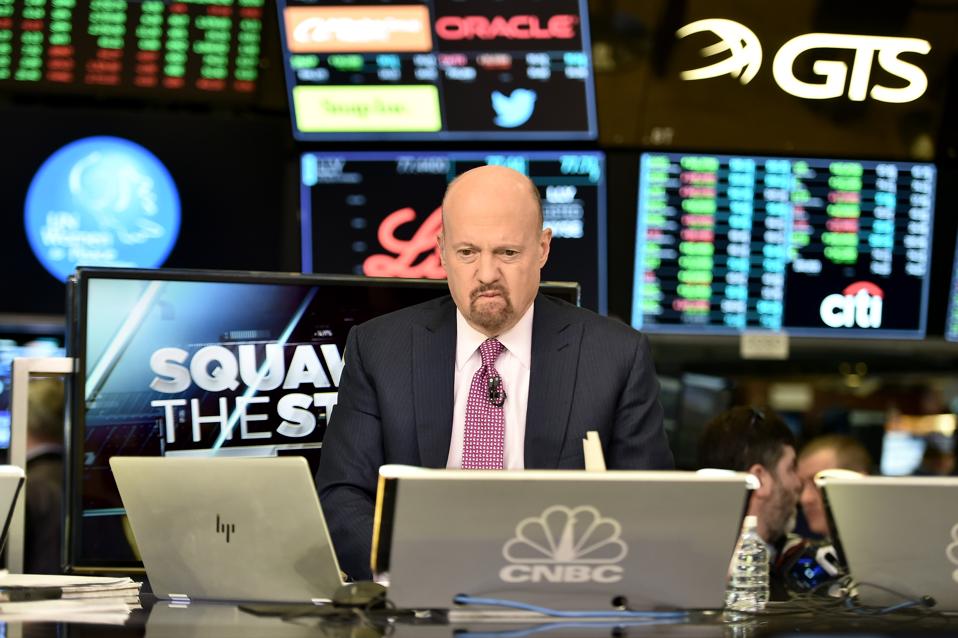 U.S. government has to come together on this and pump stimulus into the economy, save people from … [+] layoffs and save companies from bankruptcies, Jim Cramer said today. (Photo by Steven Ferdman/Patrick McMullan via Getty Images)

In the first 8 days of the month, China has:

Phases Of A Pandemic

According to the Center for Disease Control’s “Pandemic Influenza Plan,” updated in 2017, there are four distinct pandemic stages in terms of caseloads — initiation, acceleration, deceleration and preparation for the next wave.

Europe and the U.S. are now in the acceleration stage.

Hubei is in the deceleration phase, but this comes following two months of lockdown.

Self-protective quarantine, lockdowns of outbreak clusters and testing are the best precautionary approach to pandemic outbreaks, writes Nassim Nicholas Taleb, famous “black swan” forecaster and author of the book Skin in the Game.

Taleb and colleagues from New York University and the New England Complex Systems Institute wrote in a note published recently that cutting mobility in the early stages of an outbreak, especially when little is known about the pathogen, are essential.

“It will cost something to reduce mobility in the short term, but to fail do so will eventually cost everything,” they wrote. 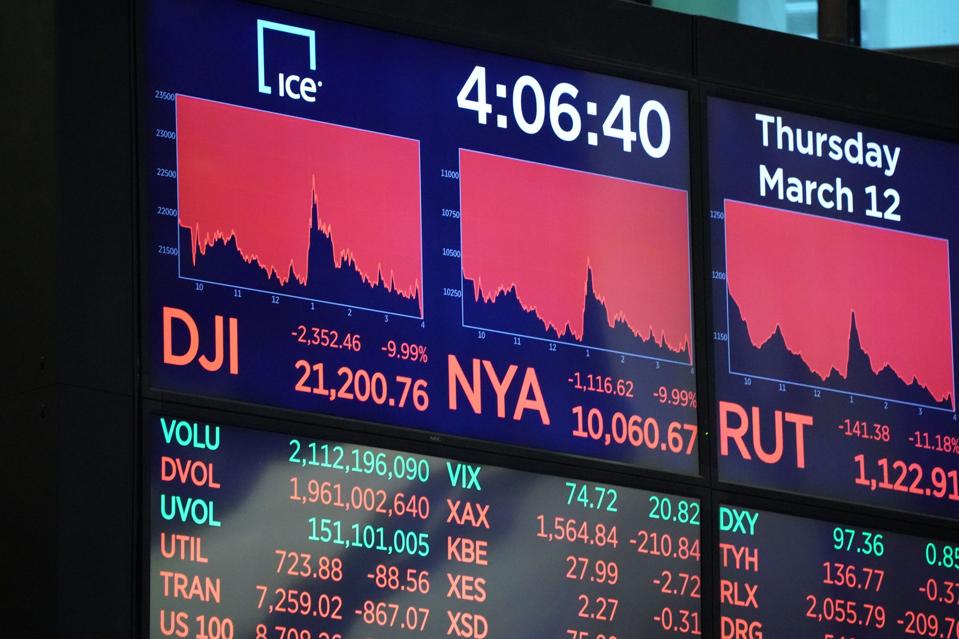 We are going lower until either China is fully functional, or Europe gets over the hump. They’re … [+] just getting started, with slow responses to travel bans in France, Spain, Germany and the U.K. (Photo by BRYAN R. SMITH/AFP via Getty Images)

Earlier this week, a shutdown announcement posted outside a hospital in Hubei province’s capital city of Wuhan, touted the treatment of more than 1,700 patients since February 2 without a single fatality.

“If a general return to work occurs this week and new infections do not spike, Chinese markets could quickly be on the mend,” thinks Vladimir Signorelli, head of Bretton Woods Research in Long Valley, New Jersey.

Should new cases balloon out in Shanghai and Beijing, it would be a huge blow to containment efforts and worsen the global economic outlook. Investors would then calculate similar re-occurring outbreaks in Europe and then in the U.S. once they get cleared of the one they are dealing with now, possibly taking them well into the summer.

“We may have a couple quarters of negative growth and a technical recession because of demand destruction,” says Perez. “Prepare for the volatility.”

Says BCG’s Carlsson-Szlezak, “If we are still dealing with this until the summer, with China-style quarantine measures in effect in places like New York, it will have a massive impact on the economy,” he says. “How massive? We don’t know.”

iRobot adds an automatic mop to its flagship Roomba

Commentary Mark Steyn - September 27, 2022
0
Monday's edition of The Mark Steyn Show started with Mark's take on the media and their responsibility for the wreckage all around. His first guest was Anne-Élisabeth Moutet with her view of Italy's new prime minister - the second coming of Il Duce, ...
MORE STORIES