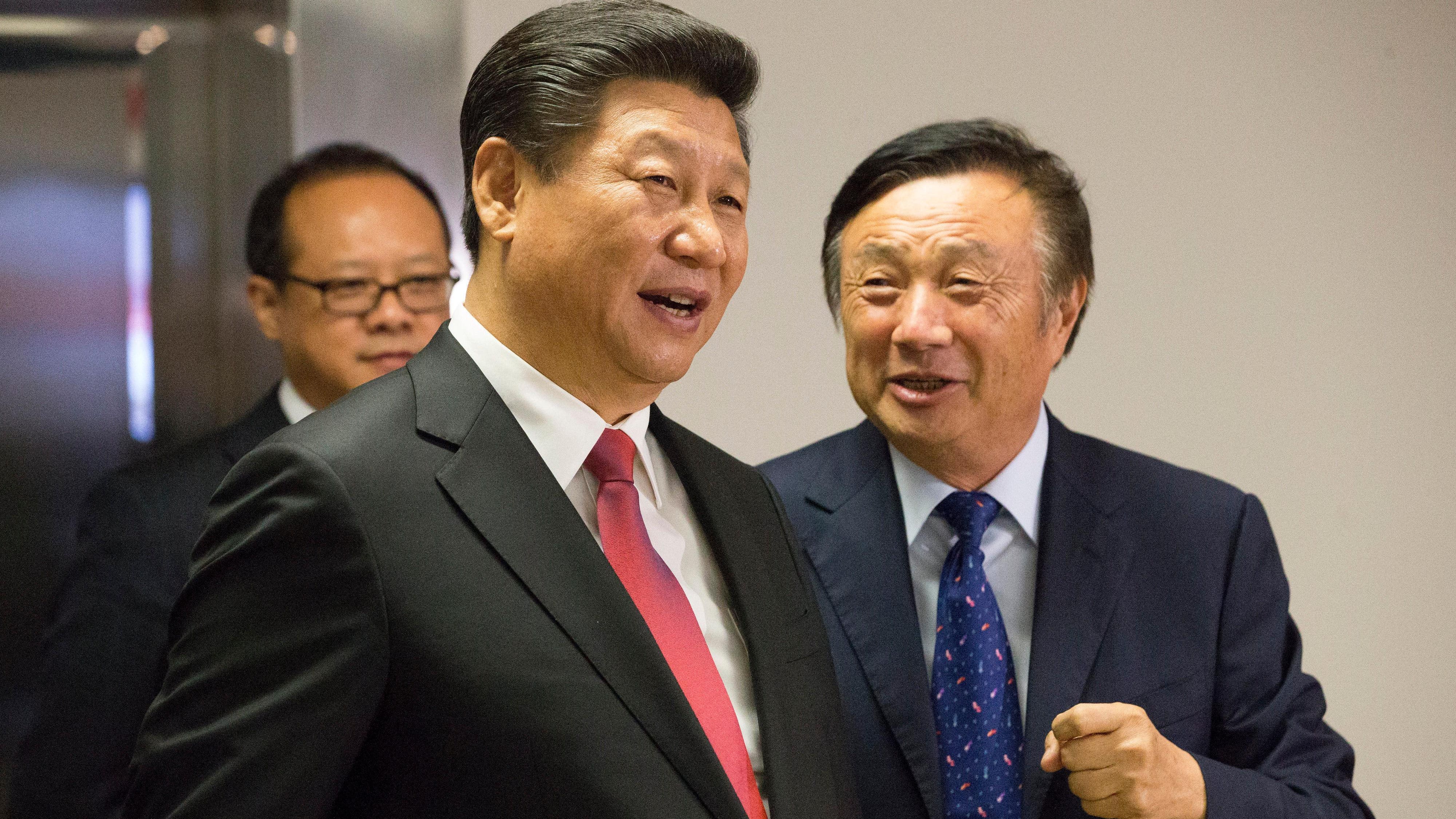 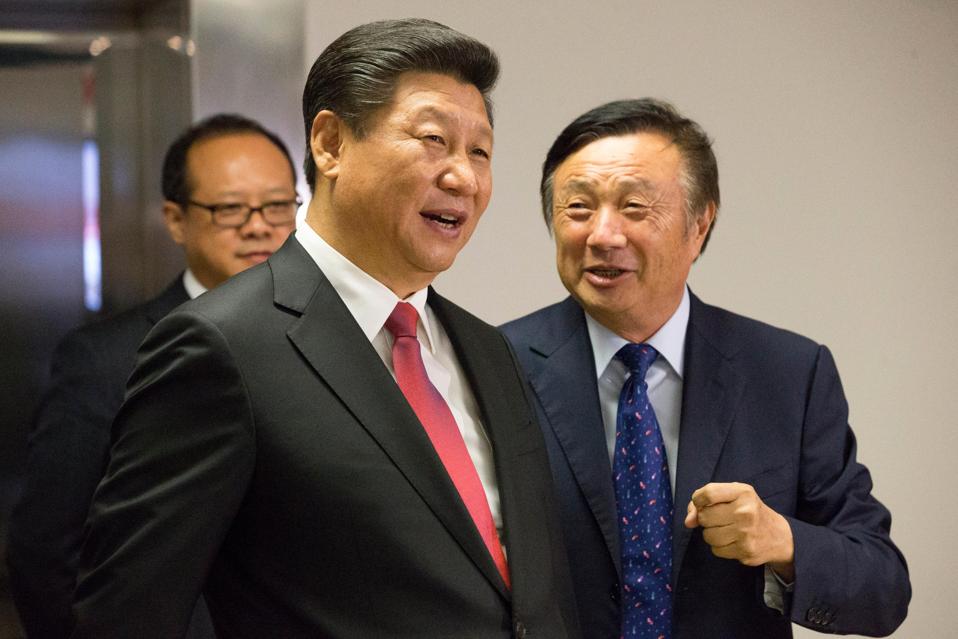 China’s President Xi Jinping is shown around the offices of Huawei Technologies by Huawei’s Ren … [+] Zhengfei in London on October 21, 2015.

What if the U.S. had the economic equivalent of a Sputnik moment and the White House failed to notice?

This, unfortunately, is now more a rhetorical question than an active one.

Admittedly, it’s become a cliché to compare this or that shock to how the Soviet Union’s 1957 satellite launch rocked America. But economist Richard Duncan has a point that Beijing’s aggressive investments in 5G and other technologies, with President Donald Trump focused on bringing back coal, is its own “national emergency.”

“There is no mystery as to why China will soon overtake the U.S. as the world’s leading technological, economic and military superpower if current trends continue,” says Duncan, author of The New Depression: The Breakdown Of The Paper Money Economy. Ultimately, he says, “there’s only one way for the U.S. to retain its global preeminence: it must invest more than China.”

Most Popular In: Asia

This, of course, is an unthinkable amount of money. But since January 2017, President Trump has made it easy for China to Sputnik the globe’s biggest economy.

The popular narrative is that Trump, by taking on Beijing like no other U.S. leader before, is leveling the playing field and scoring wins for American workers. That might’ve been true in 1985, when blunt instruments like tariffs turned economic tides. In 2020, an old-school trade war only works if you’re simultaneously building economic muscle. For all his wannabe strongman theatrics, Trump’s complacency is weakening America’s endurance while China raises its game.

China has daunting challenges. Not least of them is slowing growth, runaway debt and a geopolitical confrontation of choice over Hong Kong. Yet Beijing is multitasking in ways Washington isn’t. Xi is propping up this year’s growth, while also investing in this decade’s strategy to become No. 1.

Trump’s 1985 mindset seems to be missing this phenomenon. Nowadays, President Xi Jinping’s government barely mentions the “Made in China 2025” that irked Trumpworld so much.

Xi is clearly happy to let Trump surrogates Peter Navarro and Larry Kudlow think tariffs scared Beijing into shelving plans to dominate tech over the next five to 10 years. Hardly. The endeavor is now referred to as “new infrastructure.”

Yet there’s zero “new” or innovative about how Trump’s team is approaching economic retooling. And in that sense, Xi’s team may actually welcome another Trump term. It wouldn’t be fun in the short run, but it would enable Xi to position China as a stabler, more cooperative power than Trump’s America.

In the 80s, tax cuts may have catalyzed investments in research and development and audacious risk-taking. In the Trump era, they’re little more than fuel for dividends and share buybacks that do little to hone American ingenuity and competitiveness. 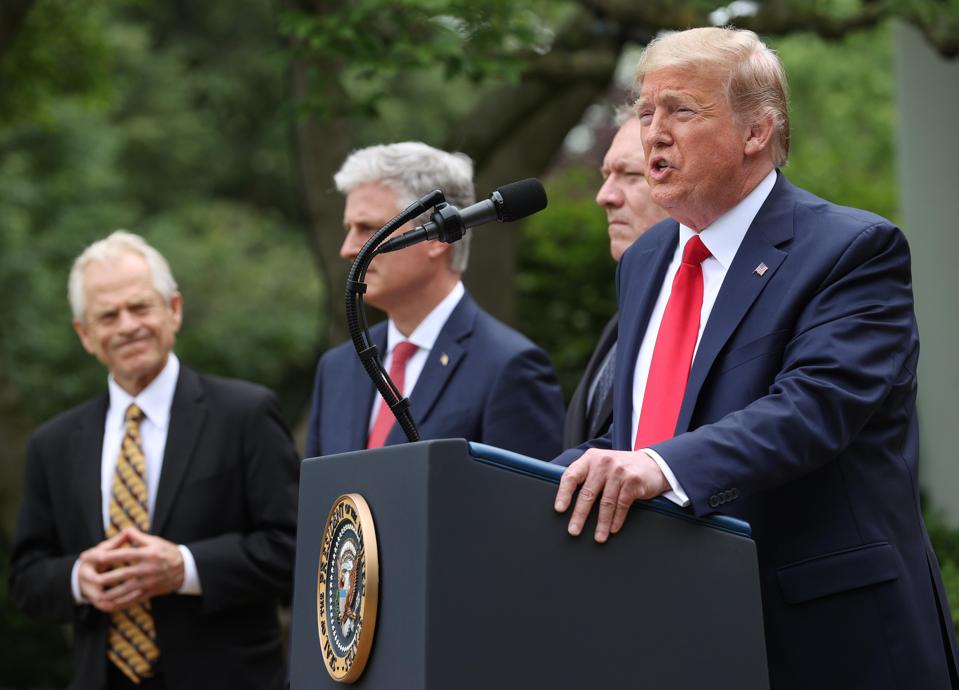 U.S. President Donald Trump is flanked by administration officials while speaking about U.S. … [+] relations with China in the Rose Garden at the White House May 29, 2020 in Washington, D.C.

To be sure, coronavirus fallout takes precedence over building a more dynamic and productive economy. Yet the biggest plan to do that isn’t coming from Trump’s Republicans but the Democrats. Case in point: Senate Minority Leader Charles Schumer’s plan, unveiled in November, to fund $100 billion of investment in AI and other cutting-edge sectors.

At the moment, the U.S. has been earmarking such non-defense-related financing at about $1 billion annually. If you want to know why Xi’s government is so confident about China’s trajectory, this lack of scale is as good a place as any to start. Even if Trump’s Republicans were getting behind Schumer’s proposal (they’re not), it’s not enough.

This, too, might seem a stretch given the trillions of dollars Washington is already spending on Covid-19 rescue packages. But U.S. borrowing costs may never be this low again, as Nobel laureate Paul Krugman has been arguing.

The Trump-era Republican Party, though, is keener on wrestling jobs and wealth from China than generating new innovative energy. This strategy explains why Trump’s presidency is actually making China great again.

No, Xi’s government isn’t enjoying taxes on $500 billion-plus of goods China sends to the U.S. Trump targeting the Huawei’s of the world, blacklisting dozens of other mainland companies and making it harder to list on New York exchanges. Beijing isn’t happy to be among Trump’s favorite Twitter bugbears or to be blamed for his dreadful handling of the coronavirus.

But Trump’s approach to Covid-19 mirrors his policies toward China. In both cases, Trump has treated the symptoms, not the underlying problems. In both, he’s favored spin, deception and projection over genuine solutions. In both, things are sure to end badly for America’s economic standing five years from now.

The U.S., notes Dan Wang of Gavekal Research, is broadening efforts to constrain Chinese tech firms, using sanctions that impact suppliers to China’s government, the military and other sectors. What, however, is Trump’s White House doing to rekindle American innovation? It’s akin to trying to win a race by flattening your opponents’ tires. You may triumph today, but the other car will still be faster tomorrow.

Given the stakes, Duncan’s $800 billion per year until 2031 is less a choice than a necessary expenditure to keep up with China. Don’t think of this $8 trillion as a bill to pay. Think of it as the only thing standing between the U.S. and No. 2 status.