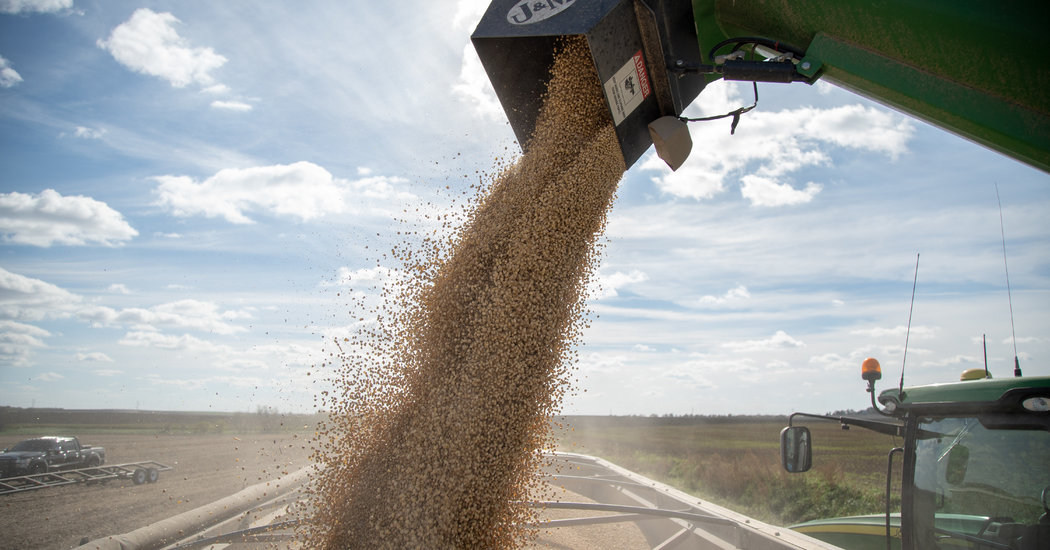 DAVOS, Switzerland — When the United States and China reached a temporary truce in their costly trade war last week, many wondered how Beijing could live up to its commitment to buy $200 billion more of American-made goods over two years. Surely, critics said, China will either renege on the deal, or it will switch to buying products from American farms and factories that it is currently purchasing from other countries.

In the halls of Davos this week, where global leaders gathered at the World Economic Forum to discuss fraying international ties, two realities were becoming clear: China plans to honor the deal, and everybody except the United States may be about to lose a lot of business.

The United States and China are already gearing up for the sale of tens of billions of dollars in American-made products to Chinese buyers in the coming months, according to people familiar with the thinking of officials in both countries. If carried through, that would strengthen President Trump’s election-year claims of achieving victory in his trade war with Beijing.

The two sides are also clear on what that means for other countries. China could pull off those purchases only if it stops buying a lot of farm products and merchandise from countries in Europe, Latin America and East Asia. Many of those countries are American allies, and some are not pleased at the prospect of losing China and its giant economy as a consumer of their exports.

In public, American officials have sought to reassure allies. “It is a great fear. Many of them have expressed it to me,” said Commerce Secretary Wilbur Ross at a news conference in Davos on Thursday. “I think it is unfounded.”

He cited the example of China purchasing more American oil and gas, with which European suppliers do not compete.

Political shifts or economic turmoil in either country could upset plans for China to buy more American goods. Still, should China soon begin to purchase the billions of dollars of American goods at the expense of Washington’s allies, it would highlight a central irony of the trade truce.

The United States has long complained that Beijing controls the levers of Chinese trade and uses them for political advantage. State-run grain companies buy American soybeans. State-run airlines buy Boeing planes. When Beijing is displeased with Washington, it can shift those purchases elsewhere, hurting American workers. The United States has called for the Chinese government to relax its grip and allow freer, fairer trade.

Freer, fairer trade would have made last week’s deal virtually impossible, however. Chinese businesses would not and could not buy $200 billion more in American grain, energy and equipment over two years unless they were told to by Beijing. The trade pact allows Chinese buyers to go elsewhere if American goods are more costly than products from other countries, but Beijing can tell state-run companies that they have more than profitability to think about.

European and Latin American countries that won business when China cut off American purchases could lose that new business. The American businesses that lost those sales would get them back and then some.

American allies have other reasons to dislike the trade pact. The agreement locks in place 25 percent American tariffs on a wide range of high-tech, Chinese-made goods subsidized by Beijing, from electric cars to commercial aircraft to farm equipment.

That could divert Chinese exports of manufactured goods to markets in Europe and elsewhere. European countries want to make and sell their own electric cars and Airbus aircraft, instead of being flooded with Chinese alternatives at prices held artificially low through government subsidies.

The so-called Phase 1 deal is the latest sign of the Trump administration’s unilateral approach to trade and China.

Many trade experts have long urged the American government to put up a united front with European companies and others that have complained about China’s trade practices. Instead, the United States has picked trade fights with allies like Mexico, Canada, South Korea, Japan and Europe. It has rejected international agreements that could have challenged China, such as the Trans-Pacific Partnership accord, and worked to undermine the enforcement abilities of the World Trade Organization, the global trade referee.

“In a worrying return to 19th century practices of managed trade, the ‘shopping list’ imposed by the deal could be seen as going against the rules-based international trading system,” said Joerg Wuttke, the president of the European Chamber of Commerce in China.

For now, Chinese willingness to buy American goods could cover a wide range of industries.

The published text of last week’s agreement sets clear numerical targets for large increases in American exports to China in four categories: manufactured goods, agriculture, energy and services. But officials have described an unpublished annex that specifies large increases in a long list of subcategories.

Many of the subcategories highlight products that China currently imports from Europe and East Asia, in the case of manufactured goods, or Latin America, for many agricultural goods. The trade agreement does almost nothing to change China’s rules so as to increase its total purchases of foreign goods, instead leaving it to the Chinese government to reallocate orders toward American exporters.

Over the past quarter century, China has managed its trade so that it has fairly consistently sold about $4 worth of goods to the United States for each $1 of goods that it bought. China’s trade with Europe has been more balanced, in part because Europe has often been seen as a politically safer choice in Beijing given China’s often rocky relationship with the United States.

But in the last several months, China has concluded that its huge trade imbalance with the United States has become a source of danger and instability, people familiar with the bilateral relationship said in interviews while insisting on anonymity because of political sensitivities. The imbalance has produced demands from the United States for fundamental changes in the Chinese economy, like an end to many subsidies, that are unacceptable, they said.

Beijing’s conclusion, the people said, is that the trade imbalance with the United States must be narrowed sharply this year and next. While that narrowing may hurt the interests of companies and farmers in Europe and elsewhere, those affected by it should realize that they enjoyed extra sales to China over the past two years during the trade war with the United States, they added.

Beijing has already begun ramping up its broad interagency process for managing trade to make sure that American companies receive the extra orders promised under the agreement. In speeches, Chinese officials emphasized that they want to keep commitments to buy imports, although they have publicly glossed over the extent to which the Phase 1 agreement with the United States will divert trade away from other countries.

“Openness has become a trademark of today’s China,” said Han Zheng, a vice premier and one of the seven members of China’s ruling Standing Committee of the Politburo, in a speech at Davos on Tuesday.

Despite the potential loss of business, some American allies like Japan say the greater economic certainty created by the deal is beneficial. Although Japan is likely to lose some export orders to the United States, it nonetheless welcomed the agreement, said Takeshi Niinami, a member of Prime Minister Shinzo Abe’s economic policy council who is also the chief executive and president of Suntory Holdings, a big beverages company.

The trade deal eases tensions between the United States and China and improves political stability and security in East Asia, Mr. Niinami said. It makes it easier for Japan, one of America’s closest allies, to invite President Xi Jinping of China for a possible visit this year, he said.

China has a strong incentive to abide by the agreement. With its economy slowing, Beijing is trying to revive consumer and investor confidence at home by emphasizing that the trade war is over.

The pact will allow the United States to scrutinize its monthly trade figures to see whether the surge in American exports to China has begun. So the Trump administration could restart the trade war with a unilateral imposition of tariffs on Chinese goods if China’s purchases falls short.

In interviews over the past month, people familiar with Chinese policymaking have made clear that Beijing officials do not want to intervene in the presidential elections in November. Indeed, their hope is that the trade deal will make China less of a political punching bag during the campaign this year.

But if the American trade deficit with China does narrow precipitously this year, Mr. Trump may well cite that as a success — particularly in Rust Belt states where trade has been a particularly potent political issue for several decades. Those regions have also tended to be crucial swing states in recent presidential elections.

Mr. Trump spoke enthusiastically about Mr. Xi in Davos on Tuesday, repeating that he was a good friend.