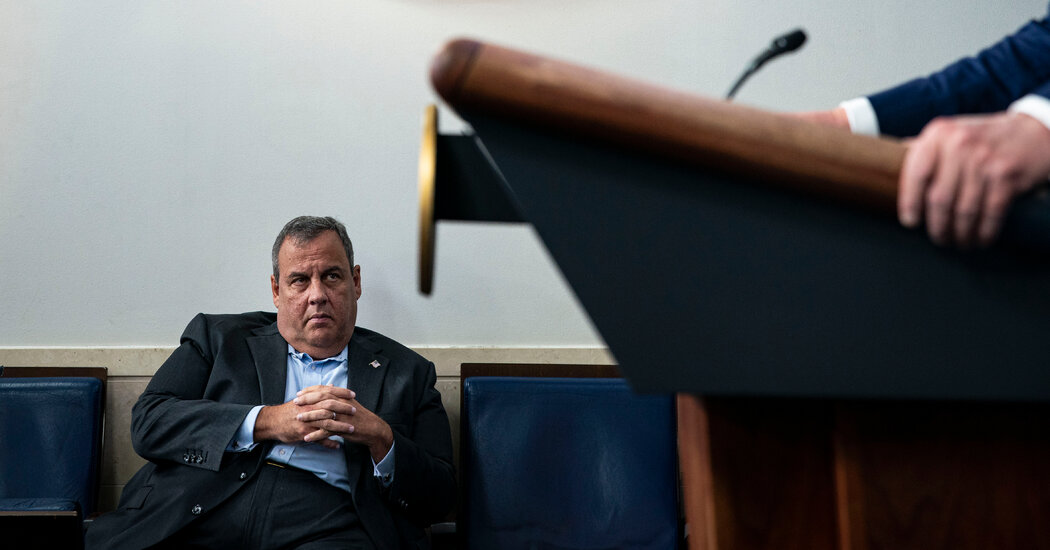 Chris Christie, the former New Jersey governor who was recently battling a coronavirus infection, said on Thursday that he was “wrong” not to wear a mask at an event honoring Judge Amy Coney Barrett and in his debate preparation sessions with President Trump, and that people should take the threat of the virus seriously.

In an interview with The New York Times and in a written statement, Mr. Christie said that he had believed he was in a “safe zone” at the White House while he was there. He urged people to follow best practices, like mask wearing and social distancing, but argued there’s a middle ground between extensive, large-scale shutdowns and reopening cities and states without taking proper precautions.

Mr. Christie said he had spent days in the intensive care unit of the Morristown Medical Center in New Jersey, after taking himself there on Oct. 3 at the insistence of his doctor. Mr. Christie, who was at high risk for negative effects of the coronavirus because of his weight and because he is an asthmatic, was one of several people around Mr. Trump, who announced early on Oct. 2 that he had tested positive, to contract the virus.

Mr. Christie had led Mr. Trump’s debate preparation sessions, and attended the Sept. 26 event honoring Ms. Barrett, the president’s nominee for the Supreme Court, in the Rose Garden. White House officials are looking at that event as a cause of the spread of the virus to more than a dozen people.

“I hope that my experience shows my fellow citizens that you should follow C.D.C. guidelines in public no matter where you are and wear a mask to protect yourself and others,” he said.

Unlike Mr. Trump, who has posited that he feels like “Superman” and left the hospital as quickly as possible, Mr. Christie said that the virus is “something to take very seriously. The ramifications are wildly random and potentially deadly.”

Mr. Christie was released from the hospital on Oct. 10, and has now been cleared to have regular contact with others, he said. He was treated with a combination of blood thinners, the Ebola drug remdesivir and an experimental antibody cocktail produced by Eli Lilly. That drug trial was recently paused over safety concerns.

He said that he still suffers from some fatigue, but nowhere near the levels he did when he was first sick.

In the interview, Mr. Christie did not directly fault Mr. Trump, who has been dismissive about mask wearing and said catching the virus was “a blessing from God” after being released from Walter Reed National Military Medical Center. Mr. Christie did say he had a false sense of safety by the fact that everyone around the president was required to be tested each day, including everyone in the debate sessions.

“I don’t know who infected me and I don’t know how frequently he was tested,” he said of Mr. Trump. While aides have left the impression publicly that Mr. Trump was tested daily, the president himself has acknowledged he was not.

Mr. Christie said that even at the event for Ms. Barrett on Sept. 26, “I was put in the third row, and what they told us was that everybody in the first three rows had been tested that day and tested negative.”

“I shouldn’t have relied on that,” he said.

Local health officials where Mr. Christie lives in New Jersey called him for contact-tracing purposes, but he said he has never heard from the White House for such a thing.

Extensive shutdowns in the early weeks of the virus made sense, Mr. Christie said. But he argued that a lot has been learned since then, and that what comes next requires leveling with the public about concerns while allowing reopenings as long as measures like mask wearing, social distancing and hand washing are followed.

“I believe we have not treated Americans as adults, who understand truth, sacrifice and responsibility that I know them to be,” he said in the statement, suggesting there’s a path forward. He described the responses to the virus as “governed by our two dominant political and media extremes: those who believe there is nothing to this virus and those alarmists who would continue to close down our country and not trust the common sense of the American people. Both are wrong.”