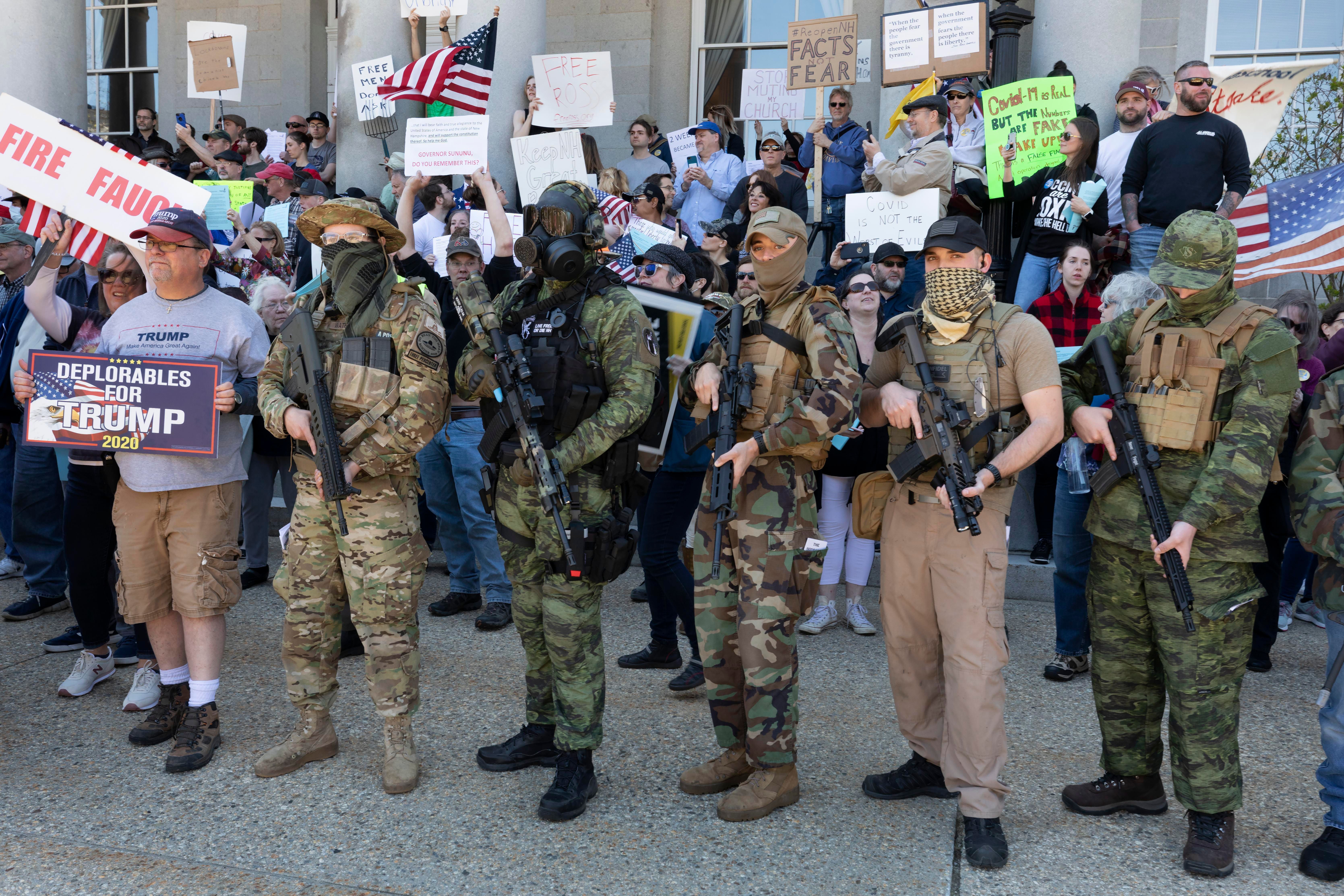 On Tuesday, Air Force Staff Sergeant Steven Carrillo, already in custody for the alleged ambush, murder and attempted murder of sheriff’s deputies in Santa Cruz, was charged with murdering a federal security officer outside the U.S. courthouse in Oakland during a protest last month. Yet as troubling as the alleged killings themselves are, it is the affiliation of the suspect to the boogaloo movement, a collection of right-wing anti-government activists, that is even more worrisome.

In Tuesday’s announcement, federal prosecutors charged Carrillo with the murder of Federal Protective Service officer David Patrick Underwood as well as other federal charges. Underwood was killed and his partner was wounded on the night of May 29 while they guarded a federal building in Oakland during a nearby protest over the death of George Floyd. When announcing the charges on Tuesday, which could be punishable by death, federal authorities alleged that Carrillo developed the plan to ambush the murdered officer during an online chat among right-wing extremist activists.

The federal prosecutors’ announcement has also drawn additional attention to the “boogaloo” movement, a loose group of far-right individuals who are pro-gun, anti-government, and believe that another civil war in America is imminent. The term boogaloo comes from the 1984 movie “Breakin’ 2: Electric Boogaloo, and followers refer to themselves as boogaloo boys (or bois). Boogaloo members often overlap with other right-wing groups, some of which follow racist and white supremacist ideologies. 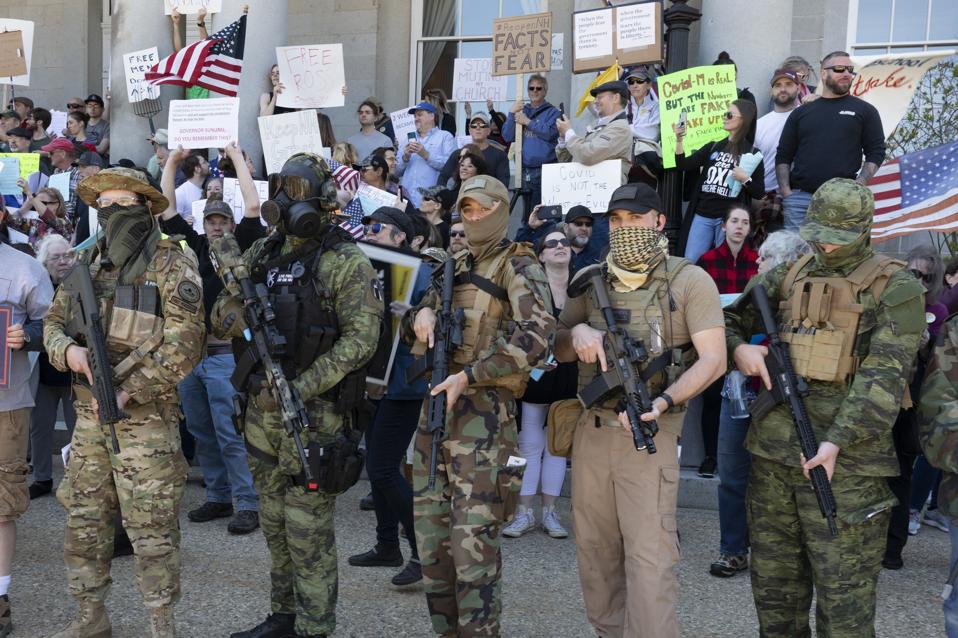 FILE – In this May 2, 2020, file photo, people, including those with the boogaloo movement, … [+] demonstrate against business closures due to concern about COVID-19, at the State House in Concord, N.H. It’s a fringe movement with roots in a online meme culture steeped in irony and dark humor. But experts warn that the anti-government boogaloo movement has attracted a dangerous element of far-right extremists. (AP Photo/Michael Dwyer, File)

The boogaloo movement has increased its visibility of late, seeing both the coronavirus pandemic and the surge of protests sweeping the nation as evidence that a new American civil war is brewing. The group, which does not appear to have a formal leadership structure, uses online chat forums like 4chan to propagate their ideology as well as organize their actions.

Much like the Antifa group does not have a holistic ideology, boogaloo proponents are not monolithic either. While both the boogaloo meme that gave rise to the group, as well as its name, are racist, some proponents hold themselves out as allies of the Black Lives Matter movement, and others see themselves as the true defenders of law and order. In any case, they are often strong advocates of gun rights and show up armed with firearms in jurisdictions where they are legally allowed to do so.

The provocative emergence of boogaloo believers also comes at a time when America is already on the edge of rising economic and social conflict. In fact, it is exactly those fractures that the boogaloo movement sees as the catalyst for potential civil war. Yet by stepping into the protests and taking extremist actions, like those Steven Carrillo is accused of doing, they are actually adding fuel to an already combustible situation. In some ways, by stepping out of the shadows, they are creating a situation where their beliefs in a potential open American conflict could become a reality.

While the public awareness of the dangers of the boogaloo movement have not yet grabbed the nation’s attention to the same level as Antifa protestors, both law enforcement officials and leading social media platforms are taking note. In May, at least seven individuals who have purported associations with the movement, including Carrillo, have been arrested. With the most recent arrests, federal law enforcement officials also appear poised to be more vigilant with respect to the actions of boogaloo and other similar “militia” oriented movements.

Additionally, even though many of the boogaloo movement’s online conversations are on less visible platforms like 4chan, where the name and group is thought to have originated as early as 2012, there are still thought to be numerous boogaloo groups on Facebook. On May 1, 2020, Facebook amended its policy on violence and incitement to prohibit “boogaloo” and similar terms “when used with images or statements depicting armed violence.” The social media platform has also pledged to make groups related to the boogaloo movement more difficult to discover.

Nonetheless, the boogaloo movement continues to gain attention as the nation is reeling from the threefold crisis of the coronavirus, a struggling economy, and the large protests that have challenged the nation on issues of police violence and racial justice. But more than just attention, it is also causing real harm, as the charges against Carrillo suggest. With the President of the United States having a long track record of fanning flames of division while also refusing to explicitly condemn right wing groups, many boogaloo followers believe they have found their moment to grab some of the national spotlight.

Regardless of that belief, however, it is incumbent for political leaders, public officials, and online media platforms to come together to urgently address not only the boogaloo movement, but other extremist groups that are looking to seize this turbulent time in American history. At a time when a single flashpoint can spark massive civil unrest, an entire movement of people seeking to ignite them presents a clear and present danger to the safety and wellbeing of the nation.

While it’s true that it might take much more than a shadowy network of anti-government activists to spark another American civil war, their efforts to do so shouldn’t go unnoticed.

Nor should their danger.