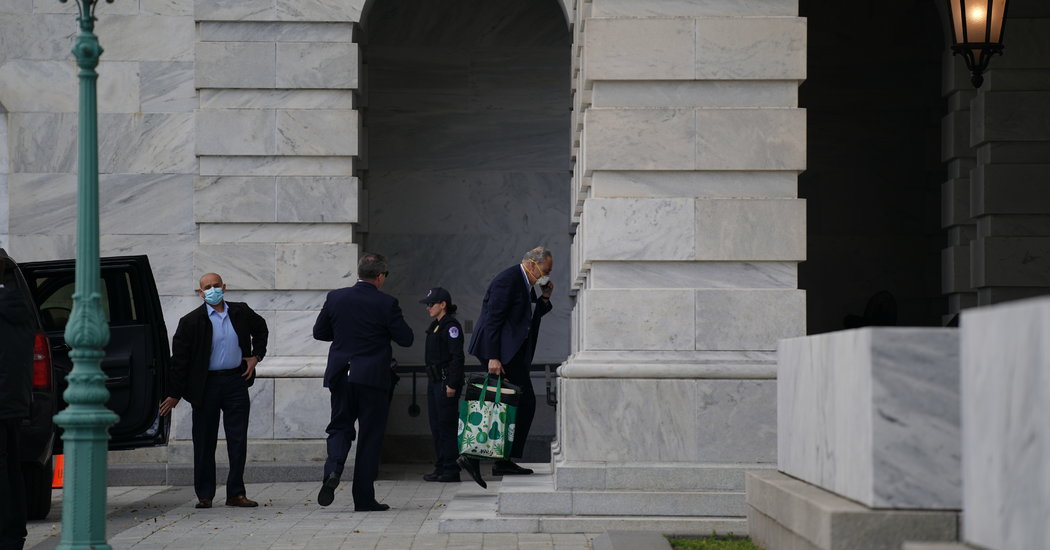 WASHINGTON — Lawmakers and Trump administration officials struck a deal on Tuesday on a $484 billion coronavirus relief package that would revive a depleted loan program for distressed small businesses and provide funds for hospitals and coronavirus testing, and planned to speed it through the Senate by late afternoon.

With the Senate set to convene at 4 p.m., leaders in both parties spent much of the day working out a compromise that had to pass muster with all 100 senators, a requirement since the chamber is in recess and able to act only on consensus bills.

As they worked, President Trump urged both chambers to quickly approve the agreement, writing on Twitter that once he signed it into law, discussions would begin over yet another round of coronavirus relief that would include money for state and local governments, investments in infrastructure, tax incentives for restaurants, entertainment and sports and payroll tax cuts, the latter of which has repeatedly been rejected by lawmakers in both parties.

“I urge the Senate and House to pass the Paycheck Protection Program and Health Care Enhancement Act with additional funding for PPP, Hospitals, and Testing,” Mr. Trump said.

The agreement would provide at least $310 billion to replenish the Paycheck Protection Program, which offers guarantees for forgivable loans to small businesses if the majority of the money is used to retain employees, according to text released hours before the Senate was to meet to pass it.

The compromise measure included several concessions Democrats had demanded as conditions of agreeing to replenish the small business loan program, including a requirement that the Trump administration prepare a national coronavirus testing strategy. The administration had resisted the idea, and Republicans in Congress had pushed states to take charge of their own testing, wary of placing the political onus on the administration.

About a fifth of the funding for the small business loan program, $60 billion, would be set aside for smaller lending institutions, in line with Democrats’ request to steer resources to businesses that typically have trouble accessing loans.

The bill would also add $60 billion for the Small Business Administration’s disaster relief fund — divided into $50 billion in loans and $10 billion in grants — and farms and other agriculture enterprises would be made eligible.

The agreement would steer $11 billion for testing to states, and mandate that states, localities, territories and tribes also create their own plans for testing and mitigation.

The legislation would set aside $6 million for the Department of Health Human Services inspector general to conduct oversight.

The House was not planning to take action on the measure until Thursday morning at the earliest, to allow lawmakers time to return to Washington for a recorded vote.

In the two weeks since Steven Mnuchin, the Treasury secretary, first requested an expedited infusion of $250 billion to shore up the newly created loan program for distressed small businesses, funding has lapsed and the program has been unable to process applications for millions of companies. Democrats rejected the administration’s request to pass a stand-alone bill funding the program, which was created last month by the $2.2 trillion stimulus law, and insisted that the money be coupled with additional funds for hospitals, testing and state and local governments.

While negotiators agreed to increase the administration’s original request, it is unclear how long the new funds could sustain the program, which had a rocky rollout that stretched the capacity of the Small Business Administration, the small federal agency overseeing it. It took only 13 days to exhaust the original tranche of $349 billion, which covered more than 1.6 million loans from nearly 5,000 lenders — more than 14 years’ worth of loans typically processed by the agency.

Mr. Schumer, Mr. Mnuchin, Speaker Nancy Pelosi of California and Mark Meadows, the White House chief of staff, negotiated Monday night and into the wee hours of Tuesday morning in an effort to resolve an impasse over Democrats’ demands for a national testing strategy, as well as whether to allocate funds to state and local governments.

“This was not political — this was not something we didn’t think was critically important,” said Representative Steny H. Hoyer, Democrat of Maryland and the majority leader. “If it wasn’t critical, I don’t think the Republicans would’ve agreed.”

“This is a victory for everybody,” he added.

Senator Chuck Schumer, Democrat of New York and the minority leader, also indicated that while there would not be a new round of aid for states and cities in the measure, the White House had agreed to give those governments flexibility in using money allocated in previous coronavirus legislation to help compensate for revenue shortfalls. Mr. Mnuchin and Republican leaders had objected to including more such funding in the interim package, saying it should be part of a future bill.

Gov. Andrew M. Cuomo of New York criticized the emerging plan because it did not include money for state and local governments. The National Governors Association had called for half a trillion dollars to help counter budgetary shortfalls.

“I think it’s a terrible mistake not to provide money for the states,” Mr. Cuomo said in Buffalo, hours before he was to meet with Mr. Trump at the White House. “I get small businesses, I get airlines. How about police? How about fire? How about health care workers? How about teachers? We’re not going to fund schools? I don’t get it, I don’t get it. It’s why I’m not in Washington.”

House Republicans were expected to force a roll-call vote that would summon members back to Washington to vote on the package.

“We are asking every member to return who can return, and we hope that is a large number,” Mr. Hoyer said on Tuesday.

But the vote might be the last one for some time under which a majority of the House would have to be physically present. Democratic leaders are expected to move this week to change the rules to allow lawmakers to vote remotely by proxy, a historic step for the chamber that would reduce the number of representatives who would need to return to Washington during the pandemic.