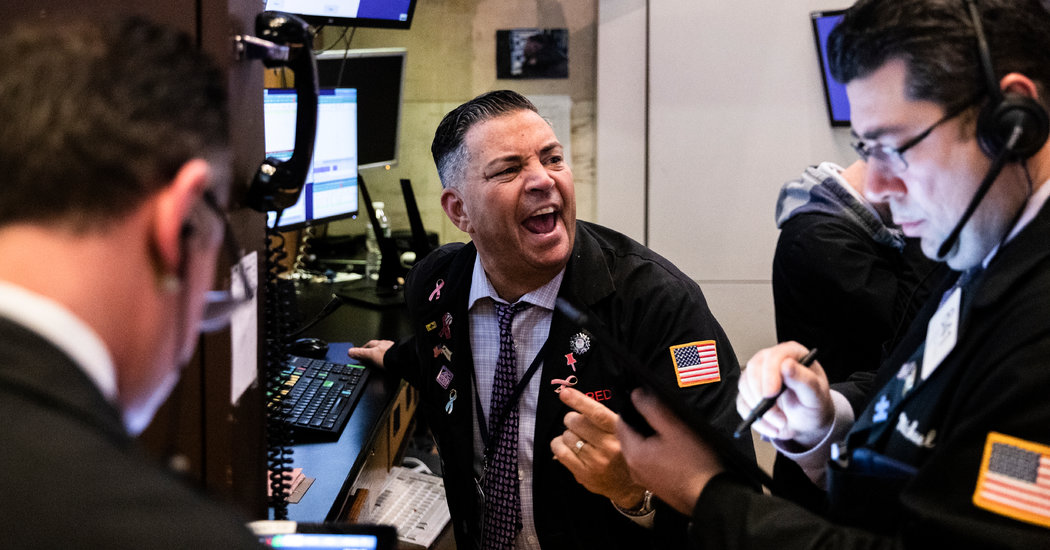 WASHINGTON — Financial markets plunged on Thursday in the biggest one-day drop since the Black Monday stock market crash of 1987, and Congress neared a deal with the White House on a sweeping economic rescue package to respond to the colossal effect of the coronavirus pandemic.

After a day of intense negotiations between Speaker Nancy Pelosi of California and the Treasury secretary, Steven Mnuchin, Ms. Pelosi told reporters that “we’ve resolved most of our differences” and the House would vote on Friday on the measure “one way or another.” It would then go to the Senate, which called off a recess that had been scheduled for next week in anticipation of a compromise.

The legislation, according to a letter Ms. Pelosi sent to her members, will include enhanced unemployment benefits, free virus testing, aid for food assistance programs and federal funds for Medicaid. The package also ensures 14 days of paid sick leave, as well as tax credits to help small- and medium-size businesses fulfill that mandate. Language was still being drafted for provisions related to family and medical leave, according to a Democratic aide, as staff members worked through the night to prepare the bill.

Ms. Pelosi, in her letter to lawmakers, also said that the House would soon pursue another package “that will take further effective action that protects the health, economic security and well-being of the American people.”

The fast-moving measure reflected a sense of urgency in Washington to enact a fiscal stimulus in the face of a pandemic that has wreaked havoc on the financial markets, which have proved impervious to other interventions. The Federal Reserve, in a drastic attempt to ensure Wall Street remained functional as volatility roiled even normally staid bond markets, said it would promptly inject as much as $1.5 trillion in loans into the banking system and broaden its purchases of Treasury securities. But neither the Fed’s actions, nor a plan by the European Central Bank to offer cheap loans to banks and step up its bond-buying campaign, were enough to assuage investors, who sent the S&P 500 down 9.5 percent.

President Trump, for his part, appeared to be scrambling to persuade the public that things were going smoothly, while suggesting he could further restrict travel. Speaking at the White House, Mr. Trump said he could conceivably ban domestic travel to regions of the United States where the coronavirus becomes “too hot.”

His comments came on the heels of his abrupt decision Wednesday night to impose sweeping travel restrictions on non-American citizens from nearly all of continental Europe, a step that angered his foreign counterparts and contributed to the global stock sell-off.

As Washington raced to mount a quick response, local governments, sports franchises, schools and cultural institutions moved to try to quell the spread of a virus that has sickened at least 132,300 people worldwide, including more than 1,500 in the United States. So far, at least 39 people have died from the virus in the country.

So much was being shut down so fast that it promised to change life as most Americans know it and bring about a spring unlike any before.

In an extraordinary step, governors in Connecticut, New Jersey, California, Ohio, Washington State and New York moved to ban large gatherings and restrict smaller ones. Broadway announced it would be turning off the lights. The Metropolitan Museum of Art said that it would temporarily close its three locations, including its Fifth Avenue flagship. The two biggest concert promoters suspended all their current tours until at least April, and Disneyland, the happiest place on earth, closed its doors for only the fourth time in history.

Schools across the country, including in Ohio and Maryland, announced they would shut for several weeks, while students at dozens of colleges and universities packed up and headed home for the foreseeable future.

The N.C.A.A. announced there would be no March Madness this year as Major League Baseball postponed the start of its regular season by at least two weeks, canceling spring training games effective immediately. The N.H.L., N.B.A. and Major League Soccer also said they would pause or suspend their seasons.

“It’s the right thing to do but obviously it stinks,” the Florida Panthers center Aleksander Barkov said in a telephone interview.

European leaders were struggling with how to respond — both to the outbreak on their shores and to Mr. Trump — who did not consult them before blocking most visitors from continental Europe to the United States for 30 days.

In a strongly worded statement, the European Union said it “disapproves of the fact that the U.S. decision to impose a travel ban was taken unilaterally and without consultation.” It said that it was “taking strong action to limit the spread” of the coronavirus, but that it “is a global crisis, not limited to any continent and it requires cooperation rather than unilateral action.’’

Asked on Thursday why he had not consulted foreign leaders beforehand, Mr. Trump said, “We had to make a decision, and I didn’t want to take time.”

The administration’s approach has sown confusion at home, with conflicting messages emanating from the White House and health officials as well as from individual government agencies.

In a meeting at the White House on Thursday, Mr. Trump sought to play down the pandemic and its effects on the financial markets, saying, “It’s going to work out fine.” He insisted that, “Frankly, the testing has been going very smooth,” even as the government’s top infectious disease expert, Dr. Anthony Fauci, was on Capitol Hill acknowledging to lawmakers that “it is a failing — I mean, let’s admit it.”

The president claimed that anyone who wanted to board a flight to the United States must first test negative for the virus, although there is no such policy. And he said a rally that he had been planning in Tampa, Fla., was “all sold out,” even though the idea of scheduling it was scrapped before it was ever announced.

Mr. Trump himself may have been exposed to the virus after coming into contact with a Brazilian official who tested positive just days after participating in meetings with him in Florida. But White House officials said Mr. Trump would not be tested for the virus.

Cabinet officials have been waiting for the Office of Management and Budget and the Office of Personnel Management to send out official guidance addressing changes to telework policies, when to impose mandatory telecommuting, whether to reconsider hosting meetings and gatherings, and whether to cancel travel — guidance that would allow them to change their own policies.

The lack of a clear, consistent response in the United States has only fueled the market sell-off, and this week the messiness extended to even the safest bonds, putting financial functioning at risk and prompting the Federal Reserve Bank of New York to take significant steps on Thursday to show markets that it has their backs. The New York Fed increased the size of its repurchase operations — basically short-term loans to banks — by $1.5 trillion through Friday, added to its weekly repurchase offerings, and shifted its Treasury purchases so that they extend across durations instead of focusing on shorter-term bills.

The package was meant to calm Treasury markets, where conditions had deteriorated in recent days, in part by making sure that as banks take bonds onto their balance sheets, they can have access to the funding they need to cover those positions. That the Fed is now buying across a range of maturities could help relieve pressures across the market.

But investors, along with the public, appeared inconsolable and desperate for Congress to unleash aid that could help either stop the spread of the virus or at least buffet an economic hit that is threatening to tip the United States into recession.

“Until there are details on the steps that leadership intends to pursue to remedy the economic effects of the viral outbreak, equity markets will be vulnerable,” said Carl Tannenbaum, the chief economist at Northern Trust.

Progress toward a compromise between Democrats and the Trump administration was a remarkable turnaround after a day of doubts — on Wall Street and in Washington — about whether a deal would be possible. House Democrats had initially scheduled a Thursday vote on their own package, signaling that they were ready to push it through even over Republican objections, and Senate Republicans who denounced the plan faced the prospect of leaving Washington having taken no action to address the widening crisis.

Mr. Mnuchin, in a frantic attempt to keep talks on track, spoke by phone eight times with Speaker Nancy Pelosi, negotiating changes to the House legislation so that it could have a chance of winning the support of Mr. Trump and Senate Republicans.

The negotiations hit snags as Republicans balked at the sweeping proposal to provide paid sick leave, something Senate Republicans had already blocked when Democrats sought earlier in the week to bring up a separate bill.

Mr. McConnell started the day criticizing Ms. Pelosi’s plan as an “ideological wish list” and indicating that the Senate had no intention of moving ahead with it. But as negotiations proceeded, he faced mounting complaints from Republican senators — including those facing challenging re-election races — who opposed the House Democrats’ plan but were reluctant to leave Washington without voting on something to address the crisis.

“A haphazard bill thrown together overnight?” Senator Joni Ernst, Republican of Iowa, told reporters on Thursday. “We need to be thorough about it.”

“The Senate has no business leaving,” Senator Sherrod Brown, Democrat of Ohio, said in a speech on the floor. “We shouldn’t leave town until we pass the House package to help workers and support our communities, and President Trump needs to sign it. We need to do our jobs.”

Senators did leave Washington on Thursday afternoon, but they planned to return on Monday, even as the coronavirus took its toll on the Capitol, prompting more lawmakers to quarantine themselves and close their offices. (During senators’ final vote before their departure, a page could be seen wiping down members’ desks and chairs with disinfectant.)

In the absence of a detailed economic rescue plan from the White House, Ms. Pelosi pressed forward this week with a package of her own that leading Republicans panned as ineffective, overreaching and too costly. But on Thursday night, it appeared as if many of the measures Democrats proposed had been accepted by the Trump administration.

Ian Shepherdson, the chief economist at Pantheon Macroeconomics, said in a research note on Thursday that it was “up to Congress to fire the fiscal bazooka, the bigger and quicker the better.”

But in an interview, Mr. Shepherdson warned that even a large stimulus package might not stop the fall in markets, and that the worst may still lie ahead.

“What stops the fear is evidence that the rate of increase of infections is slowing — believable evidence,” he said. “Everywhere you would look for reassurance, for leadership, for policy action, for reliable information — all are absent.”