WASHINGTON — As the Trump administration pushes for the federal government to lead the nation in reopening the doors to daily business, the leaders of the capital region that would live with the consequences are fragmented on how to move forward.

This city, home to 700,000 people, anchors one of the most interconnected metropolitan regions in the nation, with a total population nearly 10 times larger than the District of Columbia. Washington and the close-in counties within Virginia and Maryland have a shared Metro system and populations that move daily across their borders, a large number of them workers for the government.

Now, the region’s residents are headed toward a collision with its largest employer, the government, as Congress prepares to fully reconvene and President Trump presses to get tens of thousands of federal workers back at their desks, even as the White House struggles to contain coronavirus infections in its own ranks.

In the early days of the pandemic, local leaders in the region tried to work more or less in tandem to contain the virus; the governors of Virginia and Maryland and Washington’s mayor moved together to issue stay-at-home orders in their respective areas in March.

But now they seem to be splitting on how to best reopen.

Gov. Ralph Northam of Virginia, a Democrat, is allowing limited hairstyling, churchgoing and mall reopenings, for example, but will not permit gyms to open their doors or restaurants to have indoor diners. Noting that Northern Virginia reported more than 700 new cases between Sunday and Monday compared with fewer than 300 for the rest of the state, Mr. Northam decided that the area would maintain its current restrictions while other parts of the state were expected to move forward with the first phase of reopening on Friday.

In Maryland, Gov. Larry Hogan, a Republican, has permitted businesses now offering curbside service to slowly reopen to customers, but not in all areas.

Mayor Muriel E. Bowser of Washington said on Friday that she preferred a “telework posture” for “as long as possible.”

In late April, all three leaders of the region — often called the D.M.V., for the District, Maryland and Virginia — wrote to the federal government asking for a slow roll back to work. “As executives of the three jurisdictions of the National Capital Region, we write to ask that you continue to implement broader telework policies for the federal work force while we continue to combat the coronavirus pandemic,” they wrote. Ms. Bowser said that position held.

“I am concerned with the D.C. metro region,” said Dr. Anand Parekh, the chief medical adviser for the Bipartisan Policy Center and a former official with the Department of Health and Human Services.

“There are several hundred thousand federal employees in the D.C. region,” he added. “Their gradual return should be predicated upon the region having adequate testing capacity, a decline in confirmed cases for two to three weeks, a health care system that is under capacity with adequate P.P.E. and critical medical material, and a public health infrastructure that has enough contract tracers.” P.P.E. refers to personal protective equipment.

In Washington alone — where few of those benchmarks have been met — the percentage of positive coronavirus tests is roughly double the upper limit of what experts regard as sufficient to consider reopening, with confirmed cases still on the upswing. There were 6,389 total cases in the District of Columbia and 328 deaths — a higher rate of death than most states — as of Monday morning. Last Friday, the city reported 19 new deaths, the most deaths in a single day.

Over a dozen Capitol Police officers have been infected with the coronavirus, as have a smattering of members of Congress. Mr. Trump’s valet as well as Vice President Mike Pence’s press secretary have confirmed cases, while the director for the Centers for Disease Control and Prevention, the director of the National Institute of Allergy and Infectious Diseases, the Food and Drug Administration commissioner and the chief of naval operations are all in quarantine. As official Washington opens, it will beckon thousands of staff members serving senior officials, and flocks of lobbyists, service personnel and tourists.

City officials in Washington, unlike governors, have limited autonomy to challenge any federal decisions, given the federal government’s control over a large percentage of the work force and vast swaths of buildings and land.

The Senate has already reconvened once to confirm judges, and the House is mulling a return as early as this week. The chairman of the Committee on Health, Education, Labor and Pensions, Senator Lamar Alexander, Republican of Tennessee, is in quarantine even as his panel prepares for a major coronavirus hearing on Tuesday. 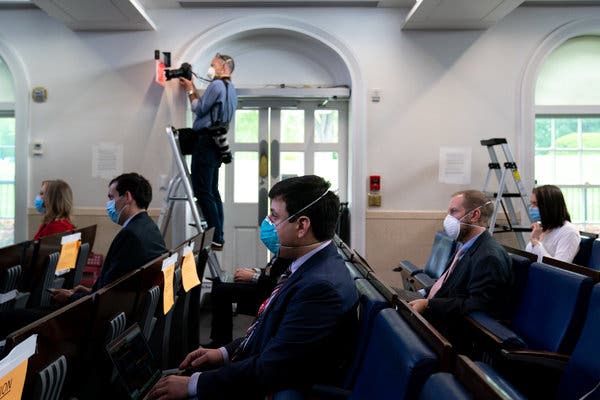 Federal officials said they were pushing for a “phased transition” back to work, although local officials view this warily.

“As conditions warrant across each state, federal agencies are working to return to normal operations,” said Rob Kuhlman, a spokesman for the Office of Management and Budget. “Our federal workers have shown tremendous fortitude in keeping the U.S. strong throughout this emergency.”

Health care officials around the region largely agree that the federal work force needs to move slowly to returning to offices. “We are very dependent on caution,” said Fran Phillips, a deputy secretary for Maryland’s Health Department. “Because the impact can ricochet across the region, it is very important that the government does not go headlong into reopening.”

At the same time, Washington is struggling to manage a vast racial disparity among those becoming ill and dying. Although black people make up less than 50 percent of the city’s population, they account for 80 percent of those who have died from the coronavirus, in what experts believe is the largest such disparity in any metropolitan region. A similar dynamic is playing out in Maryland’s near-in suburbs.

Pastor Daniel Mack during a group prayer before a food drive in Hillcrest Heights, Md., this week.Credit…Jason Andrew for The New York Times Costello Wilson sanitized the area before the food drive. Washington and Maryland are struggling to manage a vast racial disparity among those becoming ill and dying.Credit…Jason Andrew for The New York Times

Washington has moved to send messages and outreach specifically to the more underserved areas of the city that have long lacked adequate health care, and where residents rely on low-wage jobs and public transportation and live in dense areas, all major risk factors for the disease. Michelle Obama was tapped to do robocalls to city residents.

Still, the rates are startling.

“The city’s response has been on track for the immediate crisis, but at a very slow pace,” said George A. Jones, the chief executive of Bread for the City, a social service organization in Washington. “For example, they just changed the criteria of who can get tested using the public health lab. Now everyone who needs or wants to be tested can do so. Before, you needed to call and get permission to test. No one has time for that.”

The nation’s capital has longstanding racial disparities by geography, particularly with its troubled hospital system, and black residents have more of the pre-existing conditions that can lead to death with the virus. While the city’s hospital capacity is at roughly 70 percent, much of that and other health care infrastructure are outside the city’s poorest wards. Last month, Ms. Bowser announced a deal to build two badly needed centers.

The Washington Monument seen from the Cleveland Park neighborhood. Washington has 700,000 residents, but nearly 10 times as many people live in the metropolitan region.Credit…Anna Moneymaker/The New York Times

The constant testing and contact tracing that have been used in the White House are needed in the region that serves government, health care experts said.

“We expected a steeper downward slope, and we are seeing instead a more protracted peak,” said Crystal Watson, a senior scholar at the Johns Hopkins Center for Health Security in Baltimore.

“We saw steeper declines in parts of the world with more rigorous testing and contact tracing,” she added. “I know that D.C. is working hard to put in place capacities for testing and contact tracing, and I think the federal government and Congress would do well to work with the D.C. government because the public health system will have to respond if they have increased transmission, as unfortunate as that would be.”