Prime Minister Boris Johnson of Britain has been moved to intensive care. 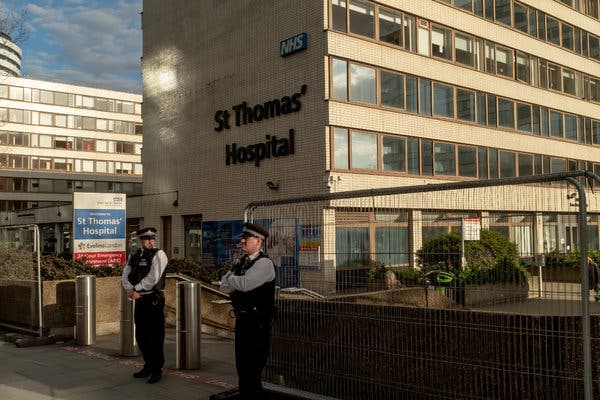 Police officers outside St. Thomas Hospital in London, where Prime Minister Boris Johnson of Britain is being treated for Covid-19.Credit…Andrew Testa for The New York Times

Prime Minister Boris Johnson was moved into intensive care on Monday, a worrisome turn in his 10-day battle with the coronavirus and the starkest evidence yet of how the virus has threatened the British political establishment and thrown its new government into upheaval.

The government said the decision was a precaution and that the prime minister had been in good spirits earlier in the day. But with Mr. Johnson’s aides releasing few details about his condition, the nation kept a tense vigil on Monday night, hoping for the best and experiencing, together, the frightening mysteries of this disease.

In a sign of how grave the situation had become, Downing Street said in a statement on Monday that Mr. Johnson had asked the foreign secretary, Dominic Raab, to deputize for him “where necessary.” The pound fell against the dollar after investors reacted to the news.

After noting earlier in the day that the prime minister was still getting official papers, Mr. Johnson’s aides said he had been moved to the intensive care unit in case he needed a ventilator to help his recovery. Not every patient in critical care is ventilated, medical experts said, but many are — or are at least given oxygen. Mr. Johnson remains conscious, officials said.

For Mr. Johnson, 55, it was an especially cruel reversal. Just four months ago, he engineered the greatest Conservative Party victory since Margaret Thatcher’s in 1987, delivered his promise to take Britain out of the European Union, and set in motion an ambitious economic program to transform his divided country.

Now, Mr. Johnson, a political phenomenon whose career has always had a quicksilver quality, finds himself in a debilitating battle after contracting a virus he initially viewed with characteristic nonchalance.

For Britain, which had so recently emerged from three-and-half years of paralysis and polarization over Brexit, Mr. Johnson’s illness plunges the country back into the uncertainty Britons thought they had left behind.

Navarro warned in January that a pandemic could imperil the lives of millions of Americans.

A top White House adviser starkly warned Trump administration officials in late January that the coronavirus crisis could cost the United States trillions of dollars and put millions of Americans at risk of illness or death.

The warning, written in a memo by Peter Navarro, President Trump’s trade adviser, is the highest-level alert known to have circulated inside the West Wing as the administration was taking its first substantive steps to confront a crisis that had already consumed China’s leaders and would go on to upend life in Europe and the United States.

“The lack of immune protection or an existing cure or vaccine would leave Americans defenseless in the case of a full-blown coronavirus outbreak on U.S. soil,” Mr. Navarro’s memo said. “This lack of protection elevates the risk of the coronavirus evolving into a full-blown pandemic, imperiling the lives of millions of Americans.”

Dated Jan. 29, it came during a period when Mr. Trump was playing down the risks to the United States, and he would later go on to say that no one could have predicted such a devastating outcome.

Mr. Navarro said in the memo that the administration faced a choice about how aggressive to be in containing an outbreak, saying the human and economic costs would be relatively low if it turned out to be a problem along the lines of a seasonal flu.

But he went on to emphasize that the “risk of a worst-case pandemic scenario should not be overlooked” given the information coming from China.

In one worst-case scenario cited in the memo, more than a half-million Americans could die.

Trump again misleads on the availability of coronavirus testing.

President Trump, at his coronavirus task force briefing, again said the number of coronavirus tests in the United States now exceeds that in other countries, wrongly suggesting that the country is doing a better job of monitoring the spread of the disease than other nations.

There is also substantial local variation in the country, with tests much harder to obtain, on average, in some parts of the country than others.

Even as new and faster tests become available, lengthy delays in obtaining results continue and test materials are running low, compounding the crises hospitals are facing.

Private companies like Quest and LabCorp are now running thousands of tests a day. But demand for testing has overwhelmed many labs and testing sites.

Doctors and officials around the country say that lengthy delays in getting results have persisted and that uneven access to tests has prolonged rationing and hampered patient care. In addition, swabs and chemicals needed to run the tests are in short supply in many of the nation’s hot zones.

Strongmen are reverting to their standard playbook, but they can’t arrest a virus.

In responding to the coronavirus pandemic, the world’s autocrats are turning to their tried-and-tested tool kits, employing a mixture of propaganda, repression and ostentatious shows of strength to exude an aura of total control over an inherently chaotic situation.

For Egypt’s president, Abdel Fattah el-Sisi, that meant deploying chemical warfare troops, clad in protective suits and armed with disinfectant, to the streets of Cairo, in a theatrical display of military muscle projected via social media.

Russia’s leader, Vladimir V. Putin, donned the plastic suit himself, in canary yellow, for a visit to a Moscow hospital for coronavirus patients. Then he dispatched to Italy 15 military planes filled with medical supplies and emblazoned with the slogan “From Russia with Love.”

President Recep Tayyip Erdogan of Turkey, a prodigious jailer of journalists, locked up a few reporters who criticized his early efforts to counter the virus, then sent a voice message to the phone of every citizen over 50, stressing that he had everything under control.

And in Turkmenistan, one of the world’s most repressive countries, where not a single infection has been officially declared, the president for life, Gurbanguly Berdymukhamedov, promoted his book on medicinal plants as a possible solution to the pandemic.

Wisconsin voters will face a choice between protecting their health and exercising their civic duty on Tuesday after state Republican leaders, backed up by a conservative majority on the state’s Supreme Court, rebuffed the Democratic governor’s attempt to postpone in-person voting in their presidential primary and local elections. The political and legal skirmishing throughout Monday was only the first round of an expected national fight over voting rights in the year of Covid-19.

The Republicans’ success came at the end of a day that left anxious voters whipsawed between competing claims from Gov. Tony Evers and his opponents in the G.O.P.-controlled State Legislature over whether Tuesday’s election would proceed as planned. It rattled democracy in a key battleground state already shaken by a fast-growing number of cases of the coronavirus.

The governor had issued an executive order postponing in-person voting and extending to June the deadline for absentee ballots. But Republican leaders succeeded in getting the state’s top court to stay the decree.

And in a decision late Monday capping the election-eve chaos, the U.S. Supreme Court’s conservative-leaning majority dealt its own blow to Wisconsin Democrats. In a 5-4 vote, the majority ruled against their attempt to extend the deadline for absentee voting in Tuesday’s elections, saying such a change “fundamentally alters the nature of the election.” The court’s four liberal members dissented, with Justice Ruth Bader Ginsburg writing that “the court’s order, I fear, will result in massive disenfranchisement.”

A ‘Liberty’ rebellion in Idaho threatens to undermine coronavirus orders.

In a state with pockets of deep wariness about both big government and mainstream medicine, the sweeping restrictions aimed at containing the spread of the virus have run into outright rebellion in some parts of Idaho, which is facing its own worrying spike in coronavirus cases.

The opposition is coming not only from people like Ammon Bundy, whose armed takeover of the Oregon refuge with dozens of other men and women in 2016 led to a 41-day standoff, but also from some state lawmakers and a county sheriff who are calling the governor’s statewide stay-at-home order an infringement on individual liberties.

Health care providers and others have been horrified at the public calls to countermand social-distancing requirements, warning that failing to take firm measures could overwhelm Idaho’s small hospitals and put large numbers of people at risk of dying.

Many of the latest claims about the Constitution have come from Idaho’s northern panhandle, where vaccination rates for other diseases have always been low and where wariness of government is high.

At a time when health officials say social-distancing measures are vital to avert catastrophic outbreaks of the kind that could overwhelm hospitals — as happened in Italy — Idaho’s tensions threaten to undermine compliance. While the state was one of the last in the country to identify a coronavirus case, it now has far more cases per capita than California. Blaine County, which includes the popular Sun Valley ski resort, now has the largest per capita concentration of coronavirus cases in the nation.

How to help from home

Sitting at home, it’s easy to feel like there’s nothing you can do to help those on the front lines of the coronavirus pandemic. But there are many things you can do to help medical professionals, the people affected directly by the virus and your local businesses.