Sales at the UK chain Wetherspoons have been falling sales after Prime Minister Boris Johnson told members of the public to stay at home and not visit Britain’s pubs.

The pub chain said that sales, which had risen by 3.2% in the previous six weeks, started falling by 4.5% in the week ending March 15, as the coronavirus pandemic scared customers off.

The decline picked up even further when the Prime Minister told people that it was vital they do not visit pubs in order to slow the spread of the highly infectious disease.

“In the early part of the current week … sales have declined at a significantly higher rate,” Wetherspoons chairman Tim Martin said in a statement to shareholders on Friday.

Earlier this week the Guardian reported on how staff at the pub chain had spoken of their fears about having to continue working in busy pub environments without masks, hand gel or other protective equipment.

They spoke out as the company announced that its pubs would remain open – but customers will pay by card, avoid standing at the bar and sit at alternate tables.

“We’re effectively going to become Petri dishes,” said one worker who said that he and others should be provided with hand gel, gloves and face masks.

“We come into contact all day with the general public, we handle money, dirty plates, glasses, sometimes bodily fluids, and the fact we can’t wear a mask/gloves front of house is making people feel on edge. We of course are washing our hands as often as possible but it’s just bizarre we aren’t allowed to protect ourselves.” 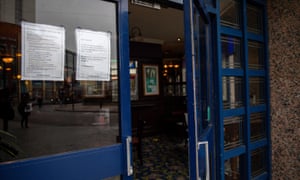 A sign on a JD Wetherspoon pub in Birmingham stating that to improve ventilation the doors will remain open. Photograph: Jacob King/PA

France has tightened the rules of who can go out by banning cycling and demanding runners and walkers limit the distance they take from home to a maximum 1-2km and 20minutes.

A statement from a cycling body reads: “Faced with the COVID-9 epidemic the French Federation of Cycling asks all cyclists to show their responsibility and avoid all cycling outside during this period. Remember the rule: “Save lives! Stay at home!”

“We see quite irresponsible behaviour, people going to beach to the park. We have to tighten the restrictions. the fines are now 135 and their application is strict; Those who haven’t the right to go out, who don’t have their justification document, who overstep the regulations will be sanctioned,” Ndiaye said.

Indonesia’s President Joko Widodo has said he would use “all state power” to tackle the health and economic problems caused by the coronavirus outbreak.

Authorities launched rapid testing for the disease today in areas where there have been cases of the virus, Widodo told reporters. 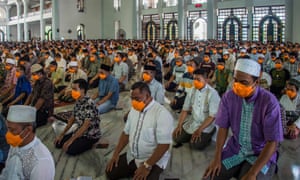 A scramble by the UK to produce thousands of ventilators to fight the coronavirus outbreak was achieving results as top companies have already produced a prototype and it should be ready for use in hospitals by the end of next week, according to Britain’s health secretary.

“More than half a dozen companies have already made one in prototype, to check with us that we are happy with the quality ,” Matt Hancock told BBC TV.

He also said that negotiations were advancing to purchase new equipment in large numbers that would enable home testing.

“Frankly I don’t care where it comes from as long as we can get our hands on it,” he told the Today Programme on BBC Radio 4.

The tests had only recently been invented and approved by regulators in the past couple of days, he added.

Separately, he said that the UK government was looking “very, very closely” at why there is a coronavirus hotspot in England’s Midlands.

A critical care nurse in Britain has made a tearful appeal to members of the public to stop stripping supermarket shelves of food after she came off a shift and was unable to buy supplies for her family.

“Those people who are stripping the shelves of basic foods. You just need to stop it because it is people like me who will be looking after you when you are at your lowest, so just stop it,” said the nurse, named as Dawn.

Critical care nurse Dawn has pleaded for the public to “stop it” after being faced with empty supermarket shelves following a 48-hour shift. pic.twitter.com/1sQHM2U5Ba

The recording was played this morning to Britain’s Health Secretary Matt Hancock, who told the BBC’s Today programme that his heart went out to people like Dawn.

He said that people should follow the guidance which has aleady been set out but the government “would do whatever it takes” if necessary.

Spain is preparing new flights today to Guayaquil, Ecuador, where the local mayor ordered trucks on to the runway yesterday to prevent a plane from landing.

That’s according to Spain’s Foreign Minister Arancha Gonzalez, who was speaking after the European Union asked Ecuador to guarantee access to its airports to ensure it can airlift citizens out of the South American nation.

The Iberia flight which was unable to land was planning to repatriate 190 EU citizens.

A journalist at TeleSur has tweeted some footage of how the incident unfolded on Thursday.

Alarming incident at Ecuador’s International Airport in Guayaquil today as an @Iberia flight from Spain is denied landing by the mayor @CynthiaViteri6 who ordered the blocking of the runway, utilizing municipal and police vehicles.

Cirque du Soleil, the world famous entertainment company, has announced it is temporarily laying off 4,679 employees – some 95 percent of its workforce.

With schools and universities in the UK now relying on digital services for their switch to remote learning, parents and students are already complaining that residential internet speeds are slowing down dramatically.

The Department for Education in England says it is engaging directly with telecommunications providers to try and fix the problem:

“The government is having regular calls with the major fixed and mobile operators, and with Ofcom, to monitor the situation and ensure that any problems on the networks are rapidly addressed and rectified.

“We fully understand the importance of having reliable internet connectivity at this time, so that people can work from home wherever possible and access critical public services online, including health information.“

A 36-year-old Australian man diagnosed with Covid-19 has died in Iceland, while his wife has been quarantined with the illness.

However, doctors said the man’s symptoms were atypical for the novel coronavirus, and although he had the illness they are continuing to investigate the cause of his death, Iceland’s national broadcaster reported.

“While he was found to be infected with the coronavirus, it is unlikely to have been the cause of his death,” epidemiologist Dr Thorolfur Gudnason, the chief of the health directorate’s national vaccination program, told public broadcaster RUV. “His symptoms came on very quickly and were not those usually associated with Covid-19 deaths.”

News about those comments from Jean-Yves Le Drian are just breaking on Reuters now and we’ll bring you more as we hear them.

It’s worth nothing however that the French state has implemented some of the strictest rules on movement already in Europe.

Following Italy and Spain, France went into lockdown last Tuesday, with people allowed to leave their homes only to buy food and other essential supplies, travel to work if unavoidable, exercise or attend medical appointments. 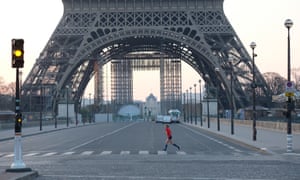 The Eiffel Tower and the surrounding streets of Paris are deserted due to the Coronavirus, COVID 19 Coronavirus outbreak, Paris, France – 19 Mar 2020 Photograph: Charbonnier Nathanael/News Pictures/REX/Shutterstock

It’s another day of carnage in the business world, with aviation in the firing line.

In Finland, the government has said it will guarantee Finnair’s €600m (£550m) pension premium loan to aid the flag carrier hit by coronavirus along with other airlines.

Abu Dhabi’s Etihad Airways will survive the coronavirus epidemic, its chief executive said in a video released today, a day after the industry’s largest body warned that Middle East airlines were in crisis.

The EU would be open to a possible request from Britain for the delaying of the UK’s departure from the European Union, according to the president of the European commission, Ursula von der Leyen.

She was speaking on German radio.

The Guardian reported last week that Britain, which entered an 11-month transition period earlier this year, will have to guarantee “uniform implementation” of Brussels’s state subsidy rules.

Good morning from London. This is Ben Quinn picking up the blog, which will be bringing you coverage of global developments and also important ones from here in Britain.

In the UK, parents are waking up to learn further details of how nursery and school places will be provided for key workers including health service, communications and police staff.

After waiting all day yesterday, the UK government last night finally published details setting out whose children would be allowed to continue at their schools and nurseries. We have covered that story here.

Parents and young people in the UK are also awaiting further clarity today on how qualifications will be awarded after summer school tests were hit by school closures.

Also in Britain, Rishi Sunak, Britain’s chancellor of the exchequer, is to unveil an emergency package aimed at protecting workers’ jobs and wages as they face hardship in the fight against the coronavirus pandemic.

If you’re just joining us or coming back for updates, these are the main developments:

It’s been a mixed day on Asia Pacific stock markets so far. Concerns about the economic impact of the outbreak have been soothed slightly by massive stimulus packages in the US, Europe, Asia and Australia. But investors were still cautious in Japan where the Nikkei finished down 1% today. Sydney was up 0.74% despite a very strong start while in Hong Kong, the Hang Seng index has risen more than 4%.

Our long read today is a fascinating insight into the coronavirus outbreak as seen from the frontline. Despite the growing death toll and the unprecedented speed at which events are moving, the past few weeks feel like just a prelude of what is to come, writes Gavin Francis, a GP in Scotland.

‘We’re clearing the decks’: a GP on watching the coronavirus pandemic unfold

In another sign of the tightening lockdown in Britain, train services will start to be reduced from Monday.

Timetables will be progressively thinned out to reflect the 70% drop in passenger numbers since the outbreak started to take hold. 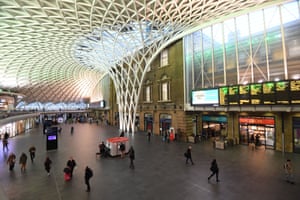 The exact number of services will be left for operators to decide but they must maintain enough trains for key workers and for the public to access medical appointments, as well as ensuring the flow of goods by rail.

Gwyn Topham, our transport correspondent, has the full story:

Train services across Britain to be stripped back from Monday