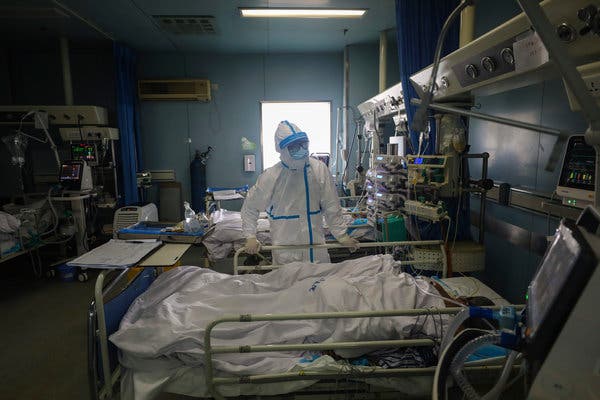 A doctor checked on a patient at Jinyintan Hospital, designated for critical coronavirus patients, in Wuhan, China, on Thursday.Credit…Chinatopix, via Associated Press

China reported the number of infected medical workers for the first time.

China disclosed on Friday that 1,716 medical workers have contracted the virus and six of them have died.

The announcement was the first official confirmation about the number of infected medical workers, and is likely to ratchet up fears about the spread of the virus.

Mr. Zeng said that Hubei, the province at the center of the outbreak, recorded 1,502 cases of infected medical workers, with 1,102 of them in Wuhan, the provincial capital. He added that further research was needed to ascertain whether the infections spread throughout the hospital or within the community.

“I think it’s quite concerning,” said Benjamin Cowling, a professor of epidemiology at the University of Hong Kong. “Healthcare workers face the challenge of caring for a substantial number of patients in Wuhan. It’s worrying to discover that a number of them have been infected.”

Medical workers in Hubei, already working round the clock, face a shortage of personal protective equipment such as masks, gowns and safety goggles. They have resorted to begging from friends, putting out frequent calls for donations, and using tape to patch up torn masks and gowns. Many doctors and nurses there say they eat only one meal a day because going to the restroom means removing and discarding safety gowns that they would not be able to replace.

Blood plasma from survivors could help create a treatment.

A senior health official in Wuhan, China, the center of the outbreak, has called on residents who have recovered from the coronavirus to donate blood plasma, believing their naturally produced antibodies could be used to treat patients who are still sick.

Dr. Zhang Dingyu, the director of the Jinyintan Hospital in Wuhan, made his appeal on Thursday after Chinese researchers said they believed such antibody treatments could help people recover from the virus.

The search for a drug capable of treating or curing the virus has frustrated researchers, as rates of infection and deaths continue to mount.

The government is currently prescribing a combination of anti-viral drugs and traditional Chinese medicine. But on Thursday, China National Biotec Group, a state-owned company under the Ministry of Health, said it found that administering a round of human antibodies from the survivors to more than 10 critically ill patients caused inflammation levels to drop significantly after 12 to 24 hours of treatment.

The company called the use of plasma “the most effective method, which can significantly reduce the mortality of critically ill patients.”

Benjamin Cowling, a professor of epidemiology at the University of Hong Kong, said the use of antibodies to treat the coronavirus is “a really good idea,” noting that it’s been used before in influenza pandemics. But he cautioned that it needed to be proven in a controlled trial.

“It’s basically transferring immunity from a patient who has recovered to a patient still fighting the infection, and then helping them to recover,” he said.

Numbers continued to climb after the government changed the criteria by which it tracks confirmed cases. China on Friday reported 5,090 new coronavirus cases and 121 new deaths in the previous 24 hours.

The authorities said a total of 63,851 people have been infected by the coronavirus and at least 1,380 people have been killed by the disease. Most of the cases occurred in Hubei, the center of the outbreak, which recorded 4,823 new cases and 116 deaths over the same period.

The tally in Hubei jumped most dramatically on Thursday after the authorities changed the diagnostic criteria for counting new cases. The government now takes into account cases diagnosed in clinical settings, including the use of CT scans, and not just those confirmed with specialized testing kits. 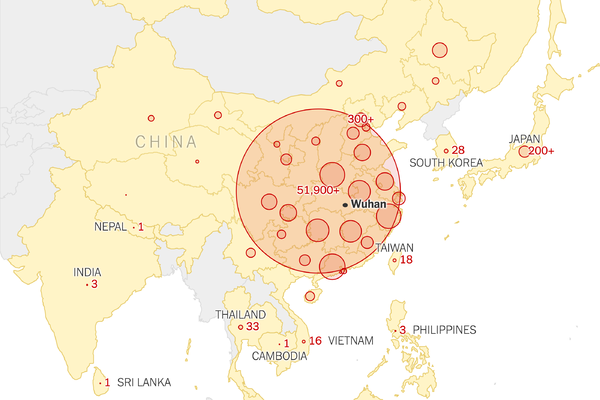 Coronavirus Map: Tracking the Spread of the Outbreak

The virus has sickened more than 64,400 people in China and 24 other countries.

A coronavirus clinic in Hong Kong is attacked.

Hong Kong’s Hospital Authority said it “seriously condemned” the attack, against an outpatient clinic in the New Territories district of Tsuen Wan. A police spokeswoman said it had occurred overnight and left a door charred. The first attack, on Saturday afternoon, damaged an air-conditioner. No one was injured in either attack.

The clinic is about four miles from an apartment building where dozens of residents were evacuated earlier this week after two residents on different floors were found to be infected, raising new fears about how the virus spreads. (Officials said an unsealed pipe might be to blame.)

There were 56 confirmed cases in the city as of Friday. Fearing a wider outbreak, residents have been staging small-scale protests at several clinics assigned to treat people with mild symptoms of the virus. Late last month, the government shelved a plan to turn an unoccupied housing project into a quarantine facility after protesters set a fire in the lobby.

As public anger and anxiety mount, the Beijing-backed government has been accused by many residents of not doing enough to contain the spread of the virus, including the refusal to quickly order a complete shutdown of the border with mainland China. The authorities have gradually restricted arrivals from mainland China over the past few weeks.

Japan announces $96 million in emergency funds to help deal with the fallout.

Japan said Friday that it would allocate about $96 million in emergency funds to help deal with the fallout from the coronavirus, a decision that comes after the country confirmed its first death related to the illness.

The Japanese cabinet approved the modest funds to strengthen countermeasures against the disease and provide support for small and medium sized businesses that are struggling with low sales amid a drop in visitors from China, the main source of tourism in Japan.

Japan has the largest number of positive diagnoses of the coronavirus outside of China. And it has been struggling to deal with the management of 3,700 people who were exposed to the illness while aboard the Diamond Princess, a cruise ship that is currently under quarantine in Yokohama.

Hundreds of people have tested positive for the illness and been taken off the ship and transported to hospitals, while many more remain in isolation on the ship, where they are expected to stay until the end of the quarantine period on Feb 19.

The cabinet’s decision to approve the emergency funds comes after the death of a woman in her 80s in Japan’s Kanagawa Prefecture and the announcement of several more cases that do not appear to be directly linked to the cruise ship or individuals who had recently traveled to China.

Friday morning, authorities said they had confirmed a new case: a man in his 70s in Wakayama Prefecture who had visited a hospital where a doctor who was also infected had worked. A colleague of the doctor and another patient had also come down with symptoms of pneumonia and were being monitored, officials said.

The U.S. says it will approve aid to North Korea to fight the coronavirus there.

The United States said on Friday that it would approve humanitarian assistance to North Korea to help international aid agencies fight the coronavirus there, amid fears that the impoverished country may be hiding an outbreak.

North Korea has not reported any cases of the new coronavirus. But in the past week, some South Korean news reports, citing unnamed sources within the secretive North, said there had been deaths in the country that were suspected to be related to the virus. The reports could not be confirmed.

North Korea shares a 930-mile border with China, where the coronavirus emerged, and has taken aggressive steps to prevent its spread, including suspending all flights and trains to and from China.

North Korea’s public health system remains dysfunctional, and the travel restrictions have made it more difficult for the North to buy or smuggle medicine, goods and other supplies from China. Relief organizations have complained that American-led U.N. sanctions have blocked them from quickly approving aid.

This week, the Red Cross called for a sanctions exemption allowing it to transfer money to its office in North Korea, describing it as “a lifesaving intervention.” It cited an urgent need for personal protective gear and testing kits to prepare for an outbreak in North Korea.

The United States has similarly expressed alarm, saying it would not stand in the way of such aid.

“The United States is deeply concerned about the vulnerability of the North Korean people to a coronavirus outbreak,” Morgan Ortagus, a State Department spokeswoman, said in a statement on Thursday.

She added that Washington encourages American and international aid groups to “counter and contain the spread of coronavirus” in the North.

A Chinese tourist who showed signs of the coronavirus after returning home from Bali, Indonesia, did not contract the disease while on holiday and must have been infected later, Indonesian health officials said on Friday.

Officials said they have tested 70 people suspected of being infected and they were all found to be negative. Among the suspected cases, 14 were on Bali, a popular tourist destination that welcomed 2 million Chinese visitors a year before the coronavirus outbreak.

“No case in Indonesia has been found,” said Ketut Suarjaya, head of the Bali provincial health office.

The Chinese tourist, who visited Bali from January 22 to 28, was determined to have the virus on February 5, he said.

Health officials checked the tourist’s hotel and found no other cases of infection. They were continuing to trace the tourist’s activities in Bali, he said.

But he noted that the 14-day incubation period for the illness had elapsed without any cases of infection being found.