Every aspect of modern life is being hit as sweeping measures are rolled out in an effort to stem the coronavirus pandemic. President Trump declared a national emergency Friday “to unleash the full power of the federal government.”

“No resource will be spared, nothing whatsoever,” the president said as stocks rose sharply, regaining some of their recent losses.

Hours later, the House overwhelmingly approved legislation to give direct relief to Americans impacted by the spreading virus. Central to the aid package are free testing and sick pay guarantee for Americans affected. The legislation offers three months of paid family and medical leave. And small and mid-sized employers would be reimbursed through tax credits.

WATCH LIVE NOW: President Trump and Vice President Pence are speaking – Watch in the player above.

Voting in the Senate is not yet set, but senators were scheduled to return Monday. Senate Leader Mitch McConnell said he expects most senators will want to “act swiftly.”

On Saturday, President Trump said he took a coronavirus test and is awaiting the results. “I decided I should based on the press conference last night,” Mr. Trump said. The president was repeatedly questioned about whether he had taken a test during a press conference Friday. 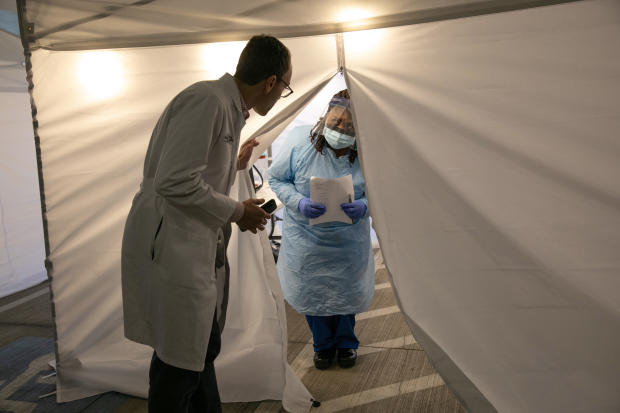 A doctor and a nurse converse before testing patients for coronavirus at the University of Washington Medical center on March 13, 2020 in Seattle, Washington. Getty Images

Amid the outbreak – and the mounting response — Disney World is closing. Broadway shut its doors. Schools are closing and large gatherings are being banned. The Boston Marathon and the Masters Tournament are now postponed. The NBA, NHL and Major League Soccer have suspended their seasons.

While about half of the more than 145,000 people who have had confirmed cases of COVID-19 have recovered, the toll in human lives is staggering. More than 5,400 people have died, including dozens of people in the United States — and it’s expected to get much worse before it gets better.

Visit the Centers for Disease Control and Prevention website for detailed information on coronavirus treatment and prevention.