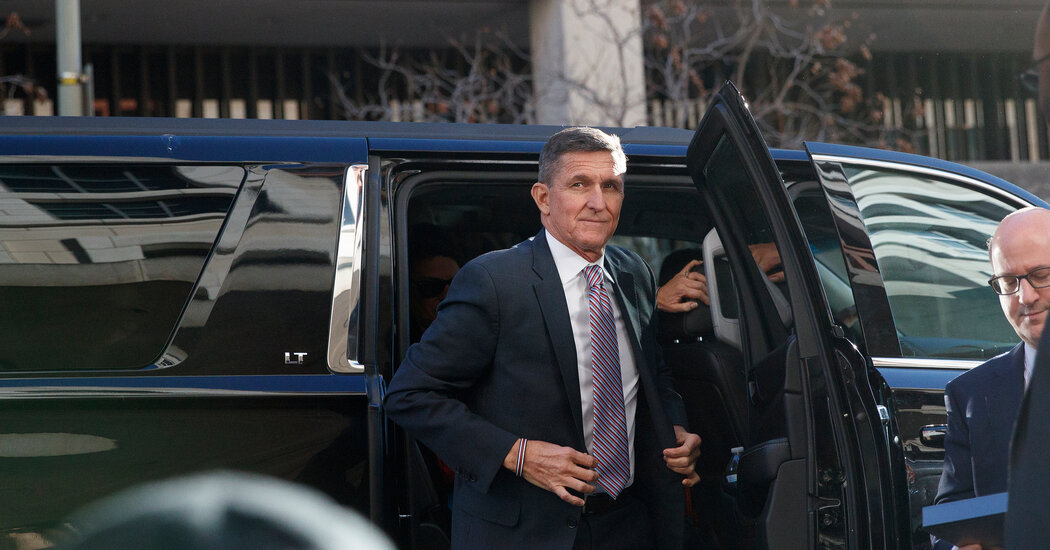 WASHINGTON — A Federal District Court judge may go forward with his plans to scrutinize the Justice Department’s request to drop the prosecution of President Trump’s former national security adviser Michael T. Flynn, a full appeals court ruled on Monday. A three-judge panel on the court had earlier ordered the judge to end the case immediately.

Separately, a panel on that same court ruled for a second time that the House cannot sue Donald F. McGahn II, the president’s former White House counsel, for defying a subpoena. The full court already reversed one such ruling by that same panel on different grounds, and Speaker Nancy Pelosi said the House would “immediately” ask the full body for another do-over.

“If allowed to stand, this wrongheaded court of appeals panel ruling threatens to strike a grave blow to one of the most fundamental constitutional roles of the Congress: to conduct oversight on behalf of the American people, including by issuing our lawful and legitimate subpoenas,” she said, calling the ruling “a flawed judicial attack on the entire House.”

Both cases arose from the Trump-Russia investigation, involve separation-of-powers issues and put on display a partisan divide on the appeals court: Each was randomly assigned to a three-judge panel that had two Republican appointees, even though Democratic appointees are a majority. The full court can vacate panel rulings it disagrees with and rehear the matter.

And in each, Judge Thomas Griffith, a George W. Bush appointee who is stepping down from the Court of Appeals for the District of Columbia Circuit after Monday, played a key role. In a concurring opinion in the Flynn matter, he urged people to interpret the outcome as being about the law, not “the partisan skirmishes of the day.”

Mr. Flynn had twice pleaded guilty to lying to the F.B.I. about his conversations with a Russian ambassador in December 2016. But the Justice Department, in a surprise move in May, moved to drop the case.

The case has since been enveloped in a fight over whether the trial judge, Emmet G. Sullivan, must dismiss the case since the Justice Department no longer wants to pursue it, or if he may scrutinize whether Attorney General William P. Barr sought to drop it for illegitimate reasons. Judge Sullivan could reject the department’s request to end the case and instead sentence Mr. Flynn anyway.

In July, a three-judge panel voted, 2 to 1, to order Judge Sullivan to dismiss the case without completing his review. The two judges in the majority were Neomi Rao, an appointee of Mr. Trump, and Karen L. Henderson, an appointee of the first President George Bush.

The decision to instead let Judge Sullivan hold a hearing before ruling on the request to drop the case had been expected since the full court voted to erase the panel decision and rehear it.

The main decision was unsigned, but it appeared likely that the judges voted 8 to 2; only Judges Rao and Henderson signed dissents. (An 11th judge on the court, Gregory Katsas — who, like Judge Rao, used to work for the Trump White House — recused himself.)

The ruling means that Judge Sullivan can proceed with his long-delayed plans to hold a hearing about the Justice Department’s request to dismiss the case before he rules on it.

The court majority ruled that it was premature for Mr. Flynn’s lawyer, Sidney Powell, to ask the appeals court to intervene before the judge ruled on the motion to dismiss the case. The majority noted that if Judge Sullivan rules against her client, she can appeal.

The court also rejected Ms. Powell’s argument that the case should be assigned to a different judge because Judge Sullivan had appointed a so-called amicus to critique the government’s arguments and then asked the full appeals court to overturn the panel’s order.

“Quite simply, the only separation-of-powers question we must answer at this juncture is whether the appointment of an amicus and the scheduling of briefing and argument is a clearly, indisputably impermissible intrusion upon executive authority, because that is all that the district judge has ordered at this point,” the unsigned opinion said.

It continued: “We have no trouble answering that question in the negative, because precedent and experience have recognized the authority of courts to appoint an amicus to assist their decision-making in similar circumstances, including in criminal cases and even when” the government is trying to drop a case.

The Justice Department has expressed alarm at Judge Sullivan’s plans to further scrutinize its decision, saying it would be constitutionally inappropriate for him to examine its internal communications. But a lawyer representing Judge Sullivan at the arguments suggested that he may only ask about abstract legal issues at the hearing, and not seek disclosures of facts.

The McGahn case is a lawsuit filed by the House asking judges to enforce a subpoena for testimony about Mr. Trump’s attempts to impede the Russia investigation. Mr. McGahn was a key witness in several episodes that raised obstruction-of-justice concerns recounted in the final report by the special counsel, Robert S. Mueller III.

The House filed the lawsuit after the Trump administration declared that Mr. McGahn was “absolutely immune” from being compelled to testify about his official duties, meaning he did not even have to show up in response to a subpoena. A lower-court judge rejected that theory.

But the appeal of that ruling was assigned to a panel that included Judges Henderson and Griffith. They ruled in February that Congress had no legal standing to sue — a decision that would have dealt a severe blow to Congress’s ability to conduct oversight of the executive branch had it stood. A third judge dissented.

But the full court voted to vacate that ruling and rehear the matter. On Aug. 7, it ruled that Congress does have legal standing to seek judicial enforcement of its subpoena. That ruling appeared to be 7 to 2, with only Judges Henderson and Griffith signing a dissent; both Judges Katsas and Rao recused themselves.

The case was returned to the original panel to decide other legal issues, and in the new ruling on Monday, Judge Griffith — joined again by Judge Henderson — once again ruled that the House’s McGahn lawsuit must be dismissed. This time, the panel ruled on the different technical grounds that no statute gives the House a so-called cause of action.

“Because the committee lacks a cause of action to enforce its subpoena, this lawsuit must be dismissed,” Judge Griffith wrote. “We note that this decision does not preclude Congress (or one of its chambers) from ever enforcing a subpoena in federal court; it simply precludes it from doing so without first enacting a statute authorizing such a suit.”

The dissenting judge on the panel, Judge Judith Rogers, an appointee of President Bill Clinton, said her colleagues were wrong again. She portrayed their ruling as embracing “a view of presidential power expressly rejected by the Supreme Court.” She had also dissented from their earlier ruling that the House lacked standing and wrote the full court’s opinion finding the opposite.

Judge Griffith is being replaced by Judge Justin R. Walker. If the full court later holds that Congress does have a cause of action to sue Mr. McGahn and once again sends the case back to the panel, Judge Griffith’s now-vacant slot will be randomly reassigned, potentially changing its ideological makeup.

A Justice Department spokeswoman declined to comment on the rulings.