WASHINGTON — After federal law enforcement agents and military troops lined up for days against protesters outside the White House, Mayor Muriel E. Bowser of Washington responded emphatically on Friday: She had city workers paint “Black Lives Matter” in giant yellow letters down a street she has maintained command of that is at the center of the confrontations.

The strong poke to President Trump within sight of his home underscored a larger power struggle between the two leaders over which one — the Democratic head of the District of Columbia or the president headquartered there — should decide who controls the streets that Mr. Trump has promised to dominate during protests over the killing last month of George Floyd in police custody in Minneapolis.

Ms. Bowser, a Washington native long steeped in city politics, again called on Mr. Trump on Friday to pull back all federal law enforcement officers and National Guard troops patrolling the city, including unidentified agents in riot gear, and said she would stop paying for the hotels for the Utah National Guard that she does not want in the city to begin with.

She renamed as Black Lives Matter Plaza the area in front of Lafayette Square where federal officials used chemical spray and smoke grenades on Monday to clear protesters ahead of Mr. Trump’s photo op at a historic church that faces the road that Ms. Bowser had painted. (The money for the paint job came out of the city’s mural program, city officials said.)

Mr. Trump, who has tried to appeal to his base by proclaiming himself a president of law and order, escalated the fight, calling Ms. Bowser “incompetent” on Twitter.

Ms. Bowser “who’s budget is totally out of control and is constantly coming back to us for ‘handouts,’ is now fighting with the National Guard, who saved her from great embarrassment,” Mr. Trump wrote. “If she doesn’t treat these men and women well, then we’ll bring in a different group of men and women!”

Ms. Bowser met this with her usual cool shrug. Asked about the president calling her incompetent, she said, “You know the thing about the pot and the kettle?”

Still, Trump officials appeared determined to make the standoff personal. Kenneth T. Cuccinelli II, the acting deputy secretary of the Department of Homeland Security, further belittled Ms. Bowser on Twitter by comparing her request to reduce the number of federal troops in Washington with the mentally ill wanting less medication. 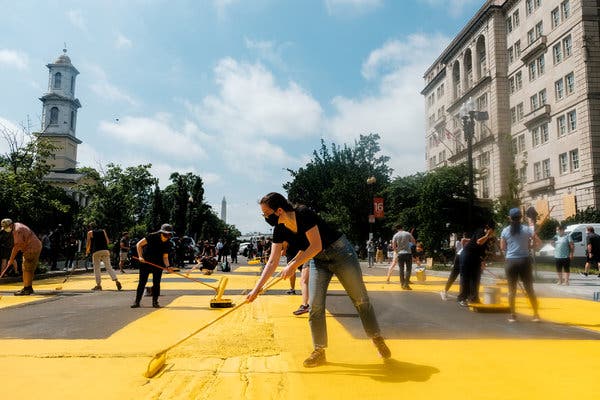 The city had the words “black lives matter” painted as a huge street mural near the White House.Credit…Michael A. McCoy for The New York Times

While Mr. Trump has clashed with governors and mayors in recent months over his administration’s response to the coronavirus pandemic and deployment of the National Guard in their streets during nationwide protests of police killings, his face-off with Ms. Bowser pits the president in his current home, the international symbol of the United States, against the city in which it sits, one that lacks the self-governing authorities of other states and cities.

While the city’s mayors have long pushed for statehood — Washington has no voting representation in Congress, a fact denounced on its license plates — Ms. Bowser has been a particularly forceful voice in favor of rights and autonomy for the district as its population and federal tax contributions have swelled.

This week, as the mayor managed the federal takeover and huge protests in the city’s central business district in the middle of a pandemic, she had seen enough.

“Our approach is three-pronged,” John Falcicchio, her chief of staff, said in an interview. “We are going to say what we think is the right thing to happen, we are going to question their tactics, and we are going to show that we are actually in control.”

Mr. Trump and Attorney General William P. Barr have deployed the full arsenal of federal government law enforcement personnel, including officers from the Bureau of Prisons and Immigration and Customs Enforcement as well as Border Patrol agents.

This week, the Trump administration also floated using an obscure provision to take control of Ms. Bowser’s Metropolitan Police Department, but did not follow through.

National Guard members and a federal Bureau of Prisons officer patrolled the streets near the White House this week.Credit…Erin Schaff/The New York Times

The federal authorities — which also include officers from Homeland Security Investigations, the Secret Service, the Transportation Security Administration and the Federal Protective Service — are expected to maintain their presence through Saturday, when thousands of demonstrators plan to march to the White House.

Ms. Bowser, with the support of Speaker Nancy Pelosi, has accused the Trump administration of escalating tensions with demonstrators, including by positioning officers without identifying insignia face-to-face with protesters.

“These additional, unidentified units are operating outside of established chains of command,” Ms. Bowser wrote in a letter to Mr. Trump that her office released Friday. “This multiplicity of forces can breed dangerous confusion.”

The mayor also planned to write to governors who had deployed National Guard troops to Washington, asking them to call the units home.

Before Mr. Floyd’s killing, Ms. Bowser and Mr. Trump had engaged in cordial dialogue. The two had at least two phone calls in recent months to discuss coronavirus funding for Washington, according to a person familiar with the conversations, who said the two leaders got along during them.

After one of their calls, Mr. Trump announced on Twitter that Washington’s transit system would be receiving more than $876 million in federal funding, congratulating Ms. Bower and calling it “a big boost.”

She responded with a tweet thanking the president for the call, but noted her administration would continue seeking an additional $775 million in stimulus funding “to make DC whole.”

But shortly after Mr. Trump lashed out at Ms. Bowser on Friday on Twitter, a lobbyist with close ties to the president announced the termination of a contract with the city government.

The lobbyist, Brian Ballard, a top fund-raiser for Mr. Trump’s re-election campaign, had entered into an agreement on May 15 to press Congress for additional coronavirus relief funding for Washington, according to a filing posted Friday.

While the District of Columbia is often treated like a state for the purposes of federal funding allocation, it was instead treated like a territory in the $2 trillion coronavirus stimulus bill signed by Mr. Trump in March. The classification meant Washington received only about $500 million, compared with a minimum of $1.25 billion allocated to each state, despite Washington’s being harder hit by the virus than most states. Its population of 705,000 is also larger than two states’.

Mr. Ballard’s firm had been pushing for Washington to retroactively receive the $750 million difference and to be treated like a state in any future coronavirus stimulus legislation, according to a person familiar with the effort.

“We are no longer in a position to deliver effective representation,” the firm wrote, “so we have respectfully withdrawn our engagement.”

Demonstrations have persisted in Washington on recent nights in protest of the killing of George Floyd.Credit…Erin Schaff/The New York Times

The federal government has great control of the District of Columbia, an artifact of the Constitution that was updated in the 1970s with a federal law that gave the city partial autonomy, but allowed Congress to have vast powers over its laws and budget. Its National Guard is the only one out of the 54 states and territories that reports to the president.

Congress has invoked its will on the city several times over the years, blocking its needle exchange program at the height of the AIDS crisis, prohibiting the city from using its money to pay for abortions for poor women, pressing a charter school agenda on its education system and trying to block the city from requiring that most residents have health insurance. After Washington’s residents voted in 2014 to legalize the possession of marijuana — the same election that sent Ms. Bowser to the mayor’s office — Congress moved to nullify that.

During Ms. Bowser’s tenure, the city has continued along a rapid path of gentrification and has seen increases in crime and startling inequities in its school system, housing market and employment. The racial disparities in death rates between black and white residents are among the highest in the nation. Critics have accused Ms. Bowser of being too closely aligned with big developers; the city’s government, like the rest of the Democratic Party, is increasingly fractured between newer progressive members and those like Ms. Bowser who remain boosters of the business community.

And on Friday, the Washington chapter of Black Lives Matter tweeted that the mayor’s move to paint the mural in front of the White House was “a performative distraction from real policy changes.”

“We are still a city that is still deeply inequitable,” said Markus Batchelor, a candidate for the City Council who represents one of Washington’s poorest neighborhoods on its State Board of Education. “We invest more on the Police Department and corrections than on programs related to jobs, youth and mental health combined. So those are the things that really don’t translate in these public overtures of Black Lives Matter.”