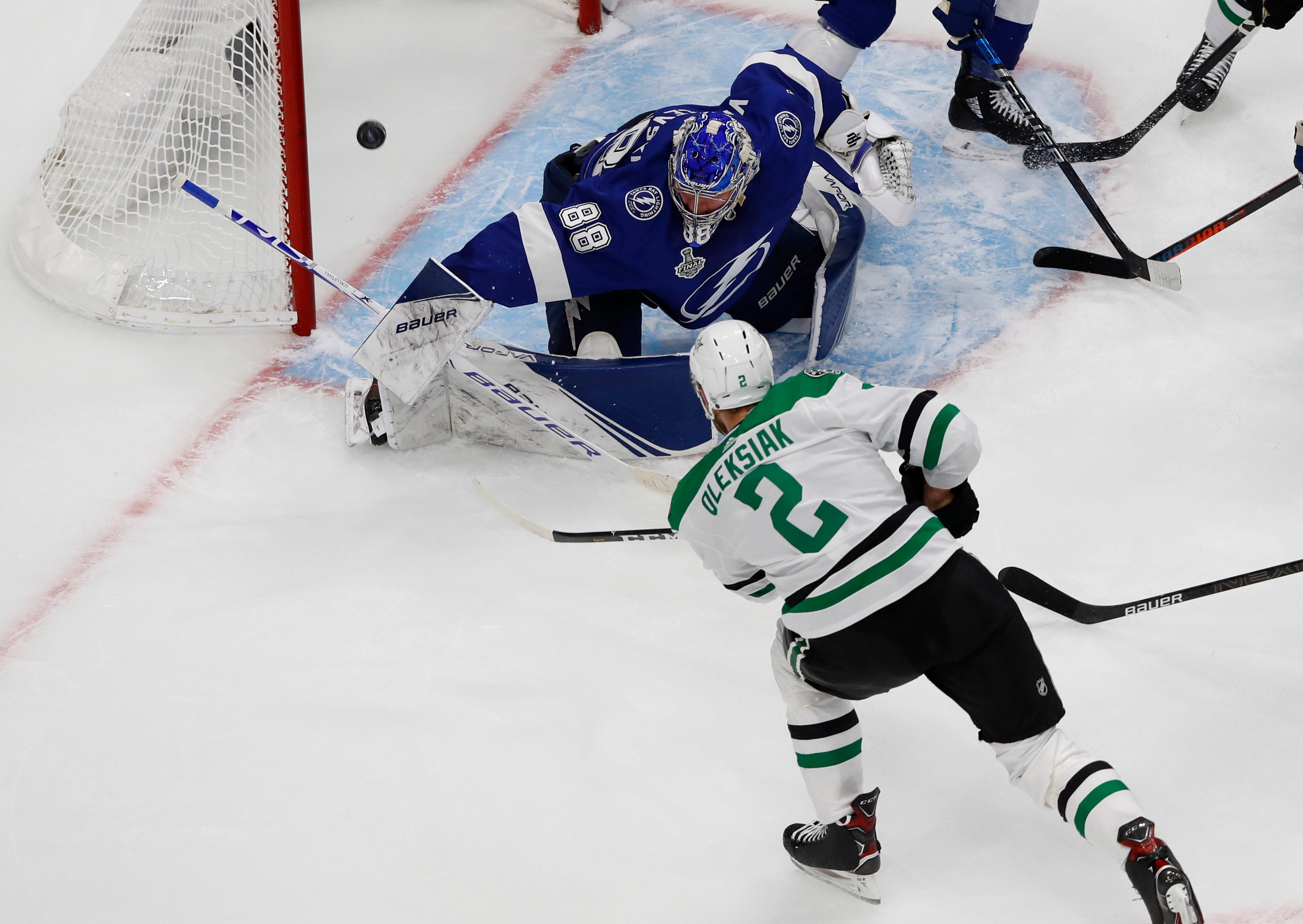 The Dallas Stars continued their unexpected postseason run when they defeated the Tampa Bay Lightning 4-1 in Game 1 of the Stanley Cup Final on Saturday night in the Edmonton, Alberta, bubble.

That’s a turnaround for a team that had lost six in a row before the coronavirus pandemic forced a shutdown in March, then was outscored 10-5 in the round robin and lost the first game of the playoffs.

The Stars were the rested team after last playing Monday night when they downed the Vegas Golden Knights in Game 5. The Lightning had one day off after playing back-to-back overtime games against the New York Islanders.

A look at the game:

The Stars’ defensemen chipped in again on offense, but not the usual suspects. Hanley, who had no goals in 46 regular-season games and seven postseason games, opened the scoring at 5:40 when he skated to the slot, took a pass from Roope Hintz and beat Lightning goalie Andrei Vasilevskiy.

“Obviously it’s something you dream about when you’re young and stuff. It’s just cool to be able to contribute with a goal like that,” Hanley told reporters.

Oleksiak also jumped into the play and scored off his own rebound. It was his fifth of the postseason after a three-goal regular season.

The Stars have 15 goals from their defense in the playoffs. Miro Heiskanen, John Klingberg and Esa Lindell, the Stars’ top three defensemen, did pick up assists in Game 1.

The Stars held leading playoff scorer Nikita Kucherov without a shot until the third period. The Lightning’s Brayden Point had no shots.

“They’re one of the best lines in hockey,” said Stars forward Blake Comeau. “They’re tough to contain. You just try to take away their space and their speed the best you can. To limit them to no chances is something that’s tough to do. They’re going to get their looks.”

The Stars blocked 26 shots in the game, led by Oleksiak’s six.

The Lightning’s goal was a fluke that went off the skate off Yanni Gourde and Hintz before going into the net.

Khudobin shined in the third period as the Stars were outshot 22-2.

“We’re going to have to make it tougher on their goalie if we’re going to score,” said Lightning coach Jon Cooper.

In addition to his goal and strong defensive game, Oleksiak lost a tooth on a second-period play.

“I went into the corner to make a hit and kind of got counter-hit, a little bit of an elbow there,” he said. “It is what it is, part of the game, right?”

Tampa Bay’s Pat Maroon was given a misconduct for shooting the puck into the Dallas bench at the end of the second period. That left the Lightning with 10 forwards for the first 10 minutes of the third period.

The Lightning were aided in the third period by three Stars penalties.

Cooper didn’t like the way the Lightning started the game.

“I don’t even know if we had to take a shower after the first two periods,” he said.

But Lightning players didn’t blame the quick turnaround or fatigue for the slow start.

“We obviously showed that we had our legs in the third,” defenseman Kevin Shattenkirk said. “I think it was more of the mental aspect of us kind of seeing what Dallas brought to the table, and it took us a little bit of time to adjust to it.”

Cooper, asked about a possible missed icing call on the Stars’ second goal, said, “It’s a moot point now. You can’t go back and change the call.”

Usually the Stanley Cup doesn’t come to the arena until it’s ready to be presented. But the NHL had it visible at the rink for players to see. That was possible because there are no fans at Rogers Place.