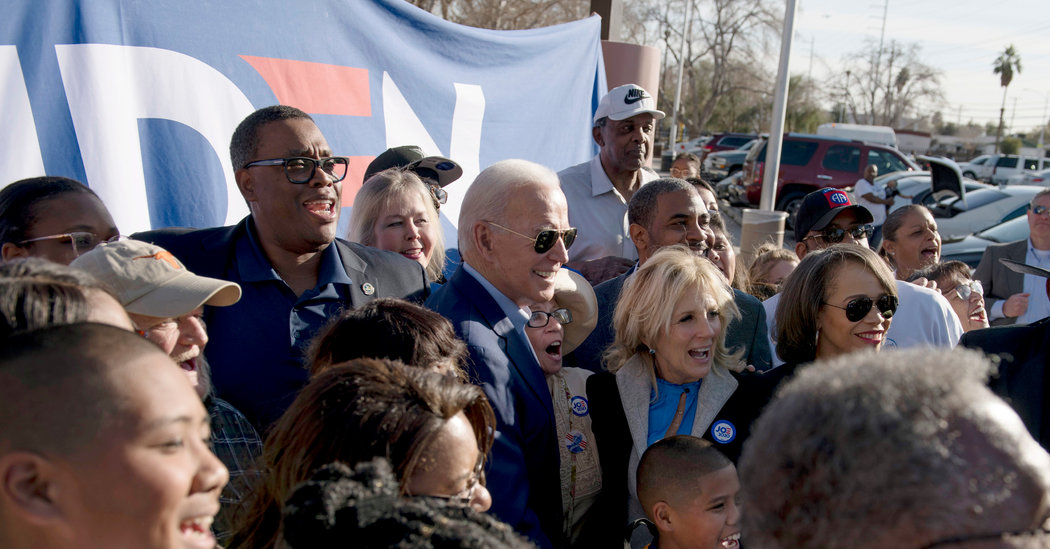 LAS VEGAS — The Democratic presidential candidates raced on Sunday to make the most of their final weekend day before the Nevada caucuses, selling their messages and tearing into their opponents.

But the rival they focused on most intently was one who isn’t even competing in the state.

“I got news for Mr. Bloomberg,” Senator Bernie Sanders of Vermont said at an event in Carson City, Nev., taking aim at the former New York City mayor, Michael R. Bloomberg, within five minutes of opening his remarks. “The American people are sick and tired of billionaires buying elections.”

In a rarity, former Vice President Joseph R. Biden Jr. echoed his progressive counterpart. “Sixty billion dollars can buy you a lot of advertising, but it can’t erase your record,” he said of Mr. Bloomberg in an interview on NBC’s “Meet the Press” that aired on Sunday.

Senator Amy Klobuchar of Minnesota, another moderate, had similar thoughts. “I’m here getting votes,” Ms. Klobuchar said in an interview on Sunday. “It’s not something where I can just — what would be the word — transport in a bunch of ads.” She called on Mr. Bloomberg to “go on the shows that every other candidate goes on, on the Sunday shows and the like.”

She added: “I don’t think I’m going to beat him on the airwaves, but I can beat him on the debate stage.” At a forum on Sunday focused on infrastructure, Ms. Klobuchar, who won the endorsement of The Las Vegas Sun last week, mentioned Mr. Bloomberg early on, referring to President Trump’s comments about his height as she stood to speak. “I am the only candidate that is 5-foot-4,” she joked. “I want that out there now.”

The fixation on Mr. Bloomberg, the free-spending multibillionaire, reflected his rising prominence in the Democratic race, even though he is skipping the first four nominating contests and focusing on the 14 Super Tuesday states that will vote on March 3.

As early voting continued in Nevada on Sunday, some of the criticism seemed to be sticking.

“Bloomberg just has bad connotations that come along with him,” Leah Garwood said as she waited in line with her husband on Sunday in Las Vegas for roughly 45 minutes to vote for a different billionaire, Tom Steyer of California. “It’s just at the back of my mind. It makes me uncomfortable, uneasy.”

Kelly Mays, an English professor who said she favored Ms. Klobuchar and Senator Elizabeth Warren of Massachusetts, called it “a little frightening that you can buy your way in at this late date.” Standing in line to vote on Sunday afternoon, she said she thought Ms. Warren’s chances in Nevada were “probably not great, but I also think people are counting her out way too early.”

Nevada, which will hold its caucuses on Saturday, is more diverse than either of the two states that have held presidential nominating contests so far. The state is determined to shrug off the conventional wisdom that any momentum gained — or hopes cruelly dashed — in the wintry, rural expanses of Iowa and New Hampshire will decide what comes after.

“I don’t think either Iowa or New Hampshire reflect America,” said Jonathan Quitt, who works for a casino on the Las Vegas Strip and volunteers for Mr. Biden. “I think they’re small, white-bread communities without diversity.”

The presidential race’s shift into states with more diverse electorates brings with it the potential for an increased focus on racial issues, and opportunities for candidates like Mr. Biden as well as challenges for Ms. Klobuchar and Pete Buttigieg, the former mayor of South Bend, Ind., who so far have shown little traction with nonwhite voters.

At a Clark County Democratic Party dinner gala at the Tropicana Las Vegas on Saturday night — filled by an establishment crowd willing to pay $150 for dinner and dress up in suits and cocktail dresses — six top presidential candidates spoke, and Mr. Biden seemed to own the room. He gave a raise-the-roof speech about the accomplishments of the Obama administration while criticizing Mr. Sanders’s health care plan for ending the private insurance that unions have fought hard for.

On “Meet the Press,” Mr. Biden more explicitly went after Mr. Sanders, the winner of the popular votes in Iowa and New Hampshire, citing the cost of his “Medicare for all” proposal.

“I mean, he’s been talking about health care, Medicare for all, universal health care, for 35 years,” Mr. Biden said. “Nothing’s happened. I helped get passed Obamacare. I helped move it forward. I got the votes.”

Mr. Sanders devoted a sizable portion of his dinner remarks in Clark County, home to 75 percent of the state’s population, to attacking Mr. Bloomberg for his positions on minimum wage laws, taxes, the financial crisis and “racist policies like stop-and-frisk,” the policing tactic that has been criticized for disproportionately affecting people of color and for which Mr. Bloomberg has apologized.

At an event on Sunday in Carson City, Nev., Mr. Sanders denounced “the power of big money interests and the greed and corruption of the corporate elite,” and singled out Mr. Bloomberg.

“Now, Mike Bloomberg is struggling — he’s down to his last $60 billion,” Mr. Sanders said mockingly. “Hey, life is hard, you know — food prices going up, housing going up. How are you going to make it on $60 billion? Mike is trying.”

Later on Sunday, speaking to to thousands of supporters at a rally at the Colorado Convention Center in Denver, Mr. Sanders renewed his jabs at Mr. Bloomberg.

“Democracy, to me, means ‘one person, one vote,’” said Mr. Sanders, who dominated the Democratic caucuses four years ago in Colorado, which has switched to a primary and will vote on Super Tuesday. “Not Bloomberg or anybody else spending hundreds of millions of dollars trying to buy an election.”

As Mr. Sanders’s supporters waited for him to speak, head-bopping to the band DeVotchKa, Mr. Bloomberg’s name rankled several. They said they disliked Mr. Bloomberg’s record on policing in New York and the fortune he was spending on his campaign, and said they might not support him if he won the Democratic nomination.

“I could justify Biden; Bloomberg, no,” said Will Mulligan, 20, a student at Colorado State University. “He’s Trump, but just more competent.”

His friend Kylie VonEiff, 19, a community college student, agreed. “I can’t get behind anyone who is using his own wealth to fund an election,” she said.

Mr. Bloomberg’s rising presence as a wild-card candidate around whom center-left voters might coalesce reflects Mr. Biden’s diminished stature, after he finished fifth in New Hampshire and fourth in Iowa.

But the former vice president and his supporters remain hopeful. Mr. Quitt, when asked if he was discouraged, was adamant: “Not. At. All.”

Public polling has been scarce in Nevada. But there are some signs that Mr. Biden could find at least the partial firewall he needs here for his campaign in Saturday’s caucuses. “There can be no Democratic nominee, none, without the voice of Latinos and African-Americans being heard, and heard loudly,” he said on Saturday night. The state is nearly 30 percent Latino and 10 percent black and has a fast-growing Asian-American population.

In addition to Nevada’s greater diversity, its residents have witnessed fewer candidate visits, and they have not been the focus of national news for a year in the way that those in Iowa and New Hampshire were.

The state’s more transient population, with many residents disconnected from neighbors and focused on jobs, makes for less obsessive following of political news.

Thirty minutes into waiting in line to vote on Sunday, Bob Ahern still had not decided whom he liked best. “I like Buttigieg. I like Klobuchar. And, actually, I like Tom Steyer,” Mr. Ahern said. He paused with an afterthought, adding: “And I do like Biden, too. Biden is good, too.”

Just as Mr. Biden’s name recognition kept him aloft in national polls for months, he still seems to enjoy that edge in the state.

At the same time, the base of support that Mr. Sanders established with a close-fought second-place finish in the state’s 2016 caucuses is much intact.

Jessica Slovak, a nurse who caucused for Mr. Sanders four years ago, was still with him as she waited in a long line over the weekend at a site for early caucusgoers in Las Vegas, where other Sanders supporters strummed an electric guitar and sang along to “The Bernie Necessities.”

Her husband, Chase Slovak, who also supports Mr. Sanders, said he was not as extreme as rivals and the news media portrayed him. But Ms. Slovak disagreed.

“I personally think he’s as far left as you can go,” she said. “It’s for the greater good.”

The Nevada Democratic Party reported that 18,538 people had voted on Saturday alone, nearly a quarter of the total number of votes cast in 2016.

Darla Mayfield, 67, waited in line with her sister to vote for the first time in her life on Sunday. “I like Amy, and then Elizabeth,” Ms. Mayfield said. “I finally did my research. I’m not going to vote just because.”