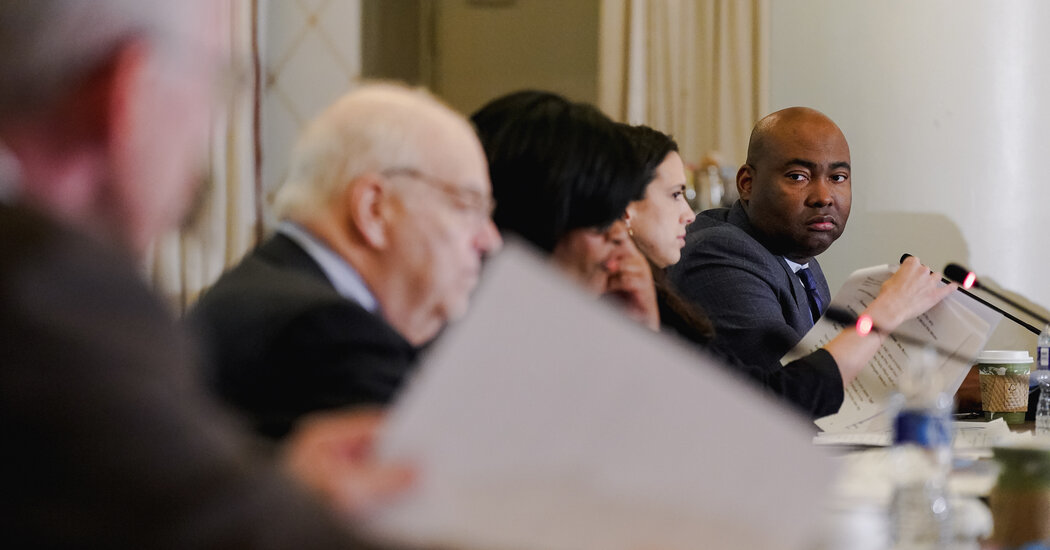 A key panel supported President Biden’s plan, which would remove Iowa as the first presidential nominating state. States with more diverse, working-class and in some cases more moderate constituencies are being elevated.

WASHINGTON — Over objections from some Democratic state leaders, the Democratic National Committee on Friday moved one step closer to enacting President Biden’s vision for drastically overhauling the party’s 2024 presidential primary process, as a key committee voted to recommend sweeping changes to the calendar.

At a daylong gathering of the D.N.C.’s Rules and Bylaws Committee in a Washington hotel ballroom, members voted to recommend supporting a 2024 Democratic presidential primary calendar that would begin in South Carolina on Feb. 3, followed by New Hampshire and Nevada on Feb. 6, Georgia on Feb. 13 and then Michigan on Feb. 27.

That plan reflected a framework Mr. Biden delivered to the committee on Thursday that emphasized racial and geographic diversity. Representatives from Iowa and New Hampshire voted against the proposal, and officials emphasized that the move by the Rules Committee was one step in what might still be a prolonged and contentious process. The proposed early states have until Jan. 5 to confirm that they can hold a primary on their assigned date.

The recommendation, which upends the traditional Democratic order of Iowa, New Hampshire, Nevada and South Carolina, must be affirmed by the full D.N.C. at a meeting in early February, but Mr. Biden’s preferences carry enormous weight with the party committee.

The proposed new order rewards some of the states that powered his political rise in 2020, elevating diverse, working-class and in some cases more moderate constituencies that were vital to Mr. Biden’s primary victory. At the same time, smaller states that have long emphasized retail politics — Iowa and New Hampshire — would be diminished.

“Given the president’s strong interest in the design of the 2024 primaries, and the dates for them, I think it’s clear that he’s running,” said James Roosevelt Jr., a co-chairman of the Rules and Bylaws Committee, who said he had spoken with Mr. Biden this week about the early-state order.

Mr. Biden has said that he intends to run again but plans to discuss the race with his family. If he does not run, the schedule, if adopted, would help other candidates with strong support from the voters of color who make up the backbone of the Democratic Party.

Here’s where the president stands after the midterm elections.

Black voters accounted for more than half of the Democrats who voted in the South Carolina primary in 2020, according to exit polling. And they make up a significant share of the primary electorates in Georgia and Michigan. Latino voters play an especially central role in Nevada.

But the shift could also hurt candidates without the campaign cash to compete quickly in early states with expensive media markets — like Nevada, Georgia and even New Hampshire, where Boston television stations drive up rates. The fast pacing of the proposed calendar could force contenders with smaller bank accounts to choose to compete in just one or two of the first three states.

“One of the things that New Hampshire is known for is our retail politics, and candidates having the opportunity to engage the electorate face to face,” said Joanne Dowdell, a D.N.C. member from New Hampshire who opposed the proposal. “By having three states, one on top of the other, I think causes a little bit of conflict for candidates trying to vie for the attention, get name recognition and also raise money.”

Jeff Link, a longtime Des Moines operative, said cutting Iowa’s caucuses out of the Democratic presidential nominating process would diminish the importance of organizing, which is central to the state’s political culture.

That could prove detrimental to the party nationally, he said, by eliminating a critical proving ground for Democratic field operatives.

“Rather than having a big field operation, they’re going to have a big social media operation,” Mr. Link said. “There’s going to be less people talking to other people in the campaign. One of the benefits of having a caucus early is that for three decades, we’ve trained campaign staff on how to organize person to person.”

Other objections have been far louder, especially from the two states accustomed to being at the front of the line.

New Hampshire has long held the nation’s first primary as a matter of state law, and state officials have said they intend to follow that law rather than any party decision. And the chairman of the Iowa Democratic Party noted in a statement that the country’s longtime leadoff caucus state has a law that “requires us to hold a caucus before the last Tuesday in February, and before any other contest.” The decision on timing would be up to the state central committee and elected officials, said Scott Brennan, a member of the Rules Committee from Iowa.

More than political clout and bragging rights is at stake: Studies of the economic impact of past caucuses in Iowa and New Hampshire primaries have found that spending was in the hundreds of millions of dollars, much of that on TV ads, though the figures were a drop in the bucket of each state’s annual economic activity.

The party has powerful tools with which to compel states to fall in line.

D.N.C. rules agreed upon earlier this year stipulated notable consequences for any state that jumps ahead to operate outside the party’s agreed-upon early window, including cuts to the number of pledged delegates and alternates for the state in question. Significantly, candidates who campaign in such states would face repercussions as well.

“If a candidate chose to campaign in a state that operated outside the window, they would lose the delegates from that state,” Mr. Roosevelt said. “They could have other penalties, because the chair is empowered to go beyond that.”

Some officials have suggested they are willing to take those risks.

“For decades we have said we will bear any sanctions,” said Raymond Buckley, the chairman of the New Hampshire Democratic Party.

Republican willingness, or lack thereof, to change dates may also be relevant in several states, including in Republican-controlled Georgia. A spokesman for Gov. Brian Kemp did not respond to a question on Friday afternoon about his reaction to the Democratic proposal. The primary date is set by Georgia’s secretary of state, Brad Raffensperger, who declined to comment on the Democrats’ process on Friday.

“Our focus is on the security and integrity of the election that’s currently underway, and we will be looking at the entire process for possible improvements once this one is successfully complete,” said Jordan Fuchs, the deputy secretary of state, as Georgia hosts a Senate runoff. But, she noted in a statement, “Our legal team has continuously stated that both parties’ primaries must be on the same day and must not cost anyone any delegates.”

Republicans have already agreed to their own early-state lineup of Iowa, New Hampshire, South Carolina and Nevada.

The Rules and Bylaws committee’s vote came a day after Mr. Biden sent a letter to members laying out his criteria for the early-voting window. In it, he rejected caucuses — effectively dealing a mortal blow to the troubled Iowa caucuses, which struggled for days to deliver results in 2020.

After Mr. Biden came in fourth place in Iowa and fifth in New Hampshire, two states with high percentages of white voters, he showed new signs of political life in Nevada. And it was South Carolina’s primary, with large numbers of Black voters, that revived his candidacy and propelled him through Super Tuesday and to the nomination.

“Defense, education, agriculture, manufacturing — South Carolina is a perfect laboratory,” said Representative James E. Clyburn, the South Carolina Democrat whose endorsement of Mr. Biden in 2020 played a vital role in the president’s victory in the state. “That’s why the people who do well in South Carolina end up doing pretty good in the general.”

Mr. Clyburn said that he had urged Mr. Biden to keep South Carolina in the early-state window — “first, second, third or fourth, didn’t matter to me” — but that he had learned of the state’s possible elevation to the kickoff primary on Thursday from the president.

Jaime Harrison, the chairman of the D.N.C., who is also from South Carolina, said he had found out at Thursday night’s state dinner.

Mr. Biden has urged the Rules and Bylaws Committee to review the calendar every four years, and the committee embraced an amendment to get that process underway.

“Nevada still has the strongest argument for being the first-in-the-nation primary,” Catherine Cortez Masto and Jacky Rosen, the state’s senators, said in a joint statement. “We will keep making our case for 2028.”