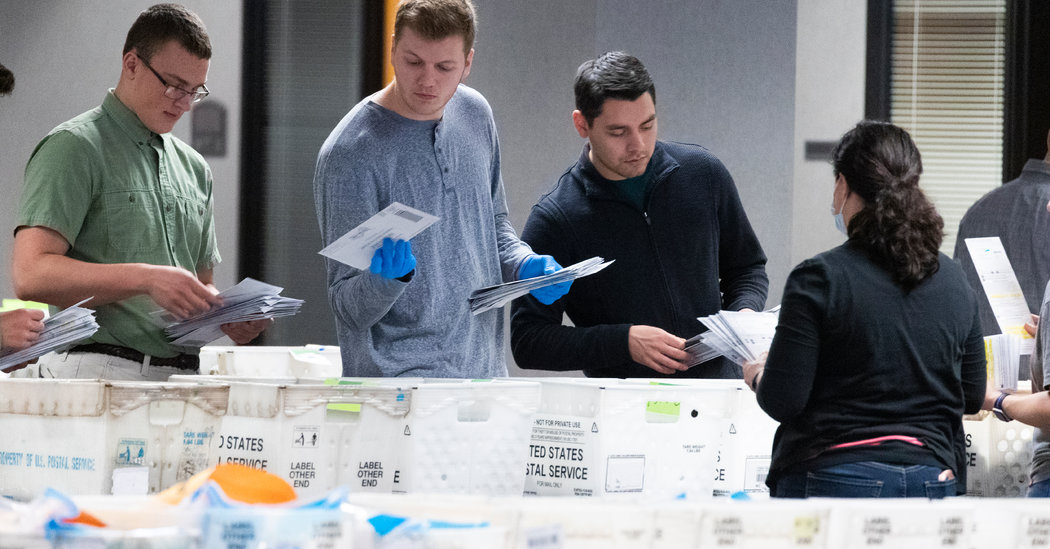 It was a shocking margin of victory in what was expected to be a close race: an 11-point blowout by a liberal judge over a conservative incumbent for a seat on the Wisconsin Supreme Court.

Now Wisconsin Democrats are working to export their template for success — intense digital outreach and a well-coordinated vote-by-mail operation — to other states in the hope that it will improve the party’s chances in local and statewide elections and in the quest to unseat President Trump in November.

Their top officials have gone on a virtual nationwide tour, extolling the virtues of their digital campaign efforts in hopes Democrats and liberal activists elsewhere can replicate their victory, when Jill Karofsky, a liberal judge, ousted State Supreme Court Justice Daniel Kelly.

The first chance comes Tuesday in a special election for a Republican-heavy House district that covers the northern third of the state. It is the nation’s first partisan contest since Wisconsin’s April 7 election, and it will provide more evidence as to whether Democratic vote-by-mail success in that race is repeatable.

State party officials have spoken regularly with counterparts in other states, addressed a national virtual gathering of union activists and wrote a public memo with Stacey Abrams’s Fair Fight Action detailing lessons learned that can be applied elsewhere.

“You do get to learn from these things,” said Ramsey Reid, the battleground states director for the Democratic National Committee, who has facilitated calls between Wisconsin officials and their counterparts in other states. “You get to train more volunteers, you get to build habits around voters and apply lessons learned to states that have challenges.”

While officials are publicly bragging about tactics like video calls with voters who need hand-holding to navigate often-cumbersome absentee ballot request forms, they’ve been more circumspect about efforts they’ve employed in the event of a narrow defeat.

In Wisconsin, Georgia, Pennsylvania and other states with upcoming June primary elections, state parties, along with Ms. Abrams’s organization, are collecting hundreds of legal affidavits from Democratic voters who have trouble acquiring and casting a ballot. The documents are intended to be used for court battles ahead of the November general election — and in Wisconsin that tactic would have been employed to challenge the results of the Supreme Court race had the conservative candidate prevailed.

Like in Wisconsin, Democrats in other battleground states with virtually no history of mail voting have for now shifted overnight to an all-mail get-out-the-vote effort. President Trump, on the other hand, has repeatedly attacked mail voting, and Republicans have said they would push ahead with plans to limit its expansion in Michigan, Minnesota and other key states.

In Georgia, more than 1.2 million people have requested absentee ballots for the state’s June 9 primary — compared to just 36,200 requests for the 2016 presidential primary. Nearly as many Georgians have applied to vote by mail in the Democratic primary as cast ballots in the party’s 2016 contest, when there were still competitive races for both parties’ nominations.

New Hampshire has no history of significant numbers of voting by mail. The state has no online portal to request an absentee ballot — some municipal clerks accept requests via email while others do not. Democratic Party officials have been warned by their Wisconsin counterparts that, if hundreds of thousands of voters seek to vote by mail, local clerks will quickly become overwhelmed by the volume.

“The New Hampshire Democratic Party has always run a voter protection hotline on Election Day and the few days before, but we are going to need to have that running for a much longer period of time,” said Liz Wester, the director of the New Hampshire Democrats’ coordinated campaign, who has spoken extensively with officials in Wisconsin since April 7. “It will be for months.”

And Pennsylvania Democrats have found themselves struggling to convince wary voters that sending ballots through the mail is safe.

“There is something about voting on Election Day,” said Sinceré Harris, the executive director of the Pennsylvania Democratic Party. “It’s something they’ve known, they’re comfortable doing it, especially in the African-American community, you can count on it. There’s a little hesitancy when it comes to the mail system.”

Last month in Wisconsin, a New York Times analysis found that Ms. Karofsky, the liberal candidate in the state’s nonpartisan Supreme Court race, performed about 10 percentage points better in mail voting than she did at the polls, suggesting Democratic voters were more likely than Republicans to request and return absentee ballots.

Republicans who control the state legislature have refused to allow all-mail elections, despite the pandemic. Health officials in Milwaukee said this week that 26 voters may have contracted the coronavirus while voting in April though the study said it was unclear precisely how they became infected.

The first test of whether Wisconsin Democrats’ April 7 methods can be repeated comes Tuesday, in the special House election that pits the Democrat Tricia Zunker, a school board president from Wausau who is an associate justice on the Ho-Chunk Nation Supreme Court, against Tom Tiffany, a two-term Republican state senator who has campaigned as a supporter of President Trump.

Officials say the contest is less about which candidate will hold the seat for eight months — the two candidates are expected to face off again in November for a full two-year term — than it is an exercise in training volunteers and voters in how to vote by mail. Each of the 110,000 voters who requested an absentee ballot for the Tuesday election had the chance to opt in to receive a mail ballot for the November general election. It’s not known how many Wisconsin voters have already requested ballots for November, a spokesman for the Wisconsin Elections Commission said.

“Our county only had four cases of Covid-19 and I think they are recovered by now,” said Jim Kurz, the Democratic Party chairman in Rusk County. “Most other counties in this district also had few cases, so I don’t think fear of disease will keep voter turnout down.”

Neither party considers the Wisconsin congressional election to be one Democrats have much chance of winning — both Democratic and Republican internal polling shows Mr. Tiffany with a double-digit advantage — but the margin between the two candidates could serve as an indicator of the state of the two parties’ enthusiasm.

In 2016, President Trump carried the district by 20 percentage points. But in last month’s Supreme Court race, the conservative candidate won the district by just 6 points while losing statewide by 11, according to an analysis by the University of Virginia’s Center for Politics.

Like the April 7 election, Tuesday’s special election will take place with polling places open across the district’s 700 municipalities in 26 counties. The Wisconsin National Guard will once again dispatch its members to help communities staff poll sites.

Mr. Tiffany, a two-term state senator who works as a dam tender on the Willow Flowage in northern Wisconsin, served as a poll worker during the April 7 election and said voters across the congressional district are less afraid of contracting and spreading the coronavirus than their counterparts in the state’s urban centers to the south.

“People in the cities and suburban areas tend to vote more absentee,” he said. “With this being a more rural district, you’ll probably see fewer absentees than you did in the April 7 election.”

Ms. Zunker had put thousands of miles on her car driving across the 26-county district before travel and public gatherings were restricted. Her campaign manager only moved to Wausau three days before Gov. Tony Evers of Wisconsin implemented the state’s Safer at Home ordinance that effectively ended all in-person campaigning.

“When we put this seat back to blue, the state is blue again. The pathway to winning the presidential race starts on May 12,” Ms. Zunker said in an interview last week.

Anything less than a double-digit victory for Mr. Tiffany will be seen as yet another indicator of Democratic momentum in what is certain to be among the most contested states on the presidential map.

“The district is loaded with people who became tired of being looked down upon by urban people and so that has been exploitable by the Republican candidates in the past three elections or so,” said David R. Obey, a Democrat who represented northern Wisconsin in Congress for 42 years before retiring after the 2010 election. “Trump, he turns the dial a little bit, and I just don’t know how much.”