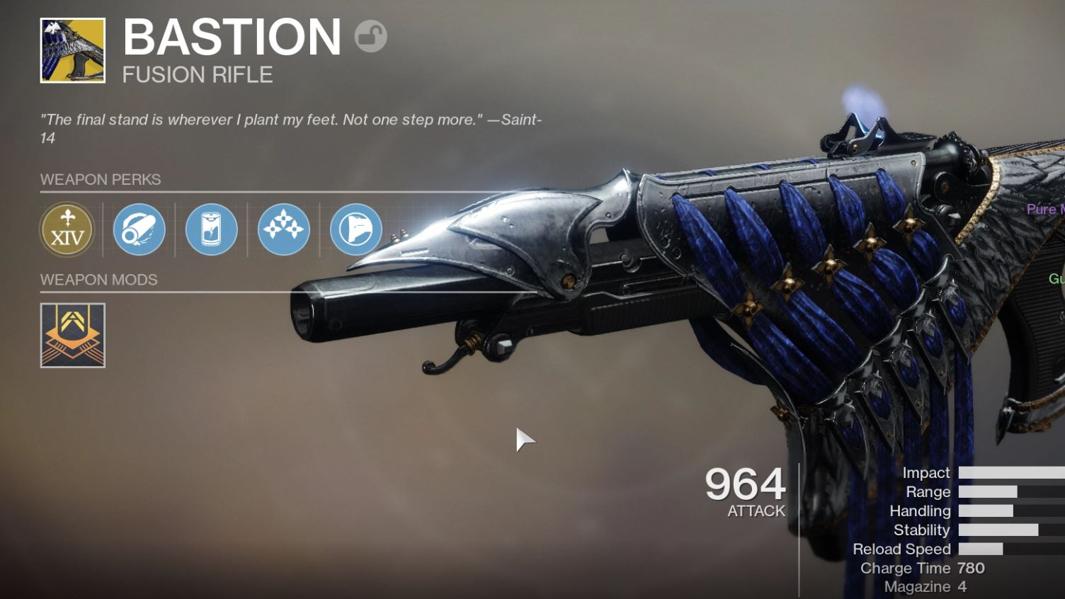 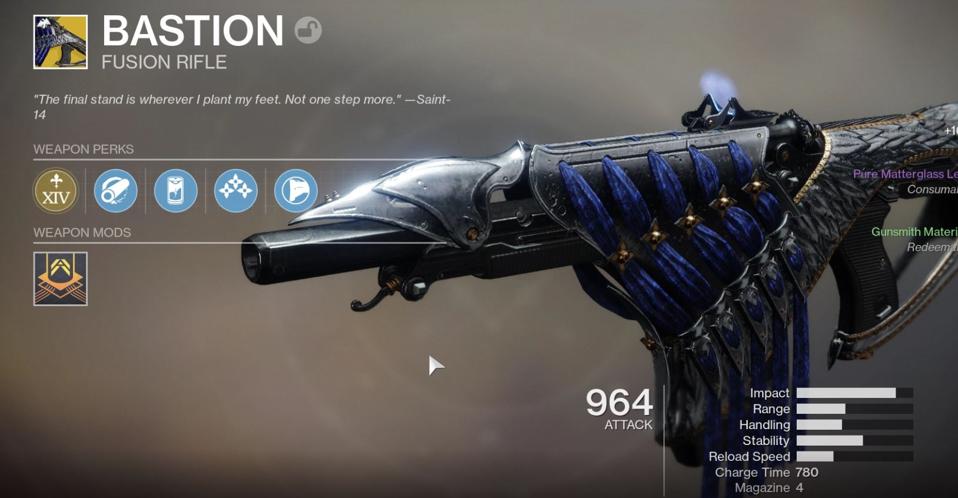 Well I figured it would happen when I was either unconscious or on a plane, and sure enough, as I slept early this morning, the Destiny community solved the grand Corridors of Time puzzle. The entire community submitted coded screenshots which were put together by streamers and folks from r/raidsecrets into a map that you needed thirty symbols to navigate through (here is that code).

Things took a strange turn when we got to the end and realized that it was our grave we were visiting, and this then sparked a new quest involving Saint-14 and Spider, oddly, which ultimately led to the final prize, Bastion, the primary linear fusion that has been on the roadmap as getting released on January 28, just over a week from now.

I have many, many thoughts about how this entire process went down. This was, by far, the longest and most complicated puzzle in Destiny history, and that’s really saying something, given past events like Outbreak Prime and Niobe Labs.

Overall, I like the puzzle. I know there were some complaints about the larger community not being able to contribute, but that wasn’t technically true. You need streamers and raidsecrets folks “in charge” and organizing things or else it becomes an utter mess. Anyone could submit codes to contribute to the maze, and if you did that at all, you were indeed part of the solution and helped. But yes, there did need to be some level of “gatekeeping,” lest organization be impossible and trolls potentially sabotaging things if say, everyone has access to edit one Google doc or something.

I do wish there was some way to keep track of progress of this quest in the game, as otherwise you were just watching streamers with complicated maps and spreadsheets that were hard to parse. I also think the input mechanism of the puzzle, running through the corridors, was a little odd, as it required no combat and was essentially just shooting at a Wish Wall, plus a lot more time added. Still, overall, I like the concept of the maze and that in the end, it wasn’t possible to brute force the ultimate solution. I think the raidsecrets crowd has needed something to do in the game for a long while now, and we saw a number of community heroes emerge from this process in a way that was pretty cool. I’m going to try to talk to some of them about all this soon, and there are too many people who deserves special credit to even list here, though all of the names on this map are certainly key. 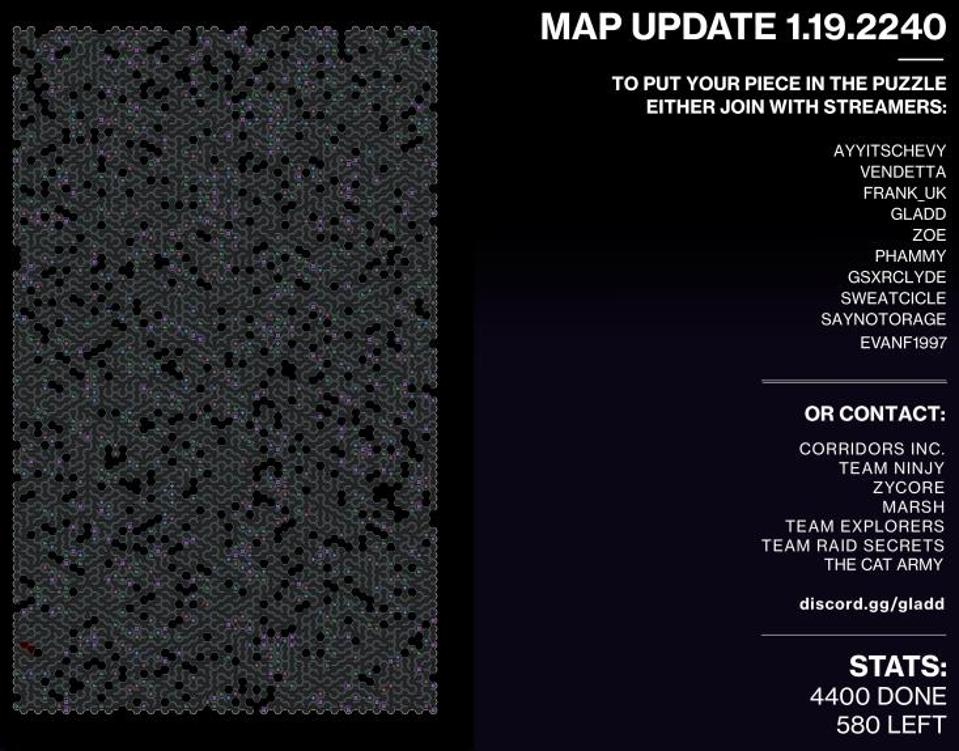 So ultimately, I wouldn’t change too much about this puzzle. It had its ups and downs and salty community moments at times, but it was a solidly designed endeavor that took a genuinely long amount of time to solve and a whole lot of community participation. I think it accomplished what it needed to in uniting the community.

The prize, however, Bastion, is another story.

Obviously, there was not going to be a single reward for this quest that was going to satisfy everyone. The prize could have been ten Gjallarhorns and someone would have complained it wasn’t eleven. But Bastion feels like the wrong “answer” to this puzzle for several reasons.

Bastion should not have been revealed before this. I know there are the dangers of datamining and what not, but the prize for a puzzle this secretive, complicated and massive should have been something completely secret, not a gun that we’ve seen every single time we look at the roadmap or promotional screenshots from the season.

I maintain that this puzzle would have been the perfect way to bring back an iconic Destiny 1 weapon like the Mythoclast, as that fits perfectly lore-wise with what we’ve seen in this puzzle. And yet I would have taken a brand new weapon we had never seen before either. Bastion being the prize when we’ve known about it this entire time couldn’t help but be a let-down in the end, even if the gun ends up being good.

I do not like the Spider sub-quest tacked on to the end of this, as after a week straight of trying to solve a puzzle, it feels weird to get out of the Corridors of Time and into a Spider-based quest that has you running into steps like doing 10 bounties for him or doing 8 public events. I didn’t see it live but I can imagine the puzzle-solvers groaning as they hit that step at 3 in the morning of whatever it was. This feels like two different quests jammed together, and it seems like maybe this is just “early access” to the Bastion quest, and in a week everyone else will just avoid the whole Corridors puzzle and get the Spider part of this quest which is simple to complete. 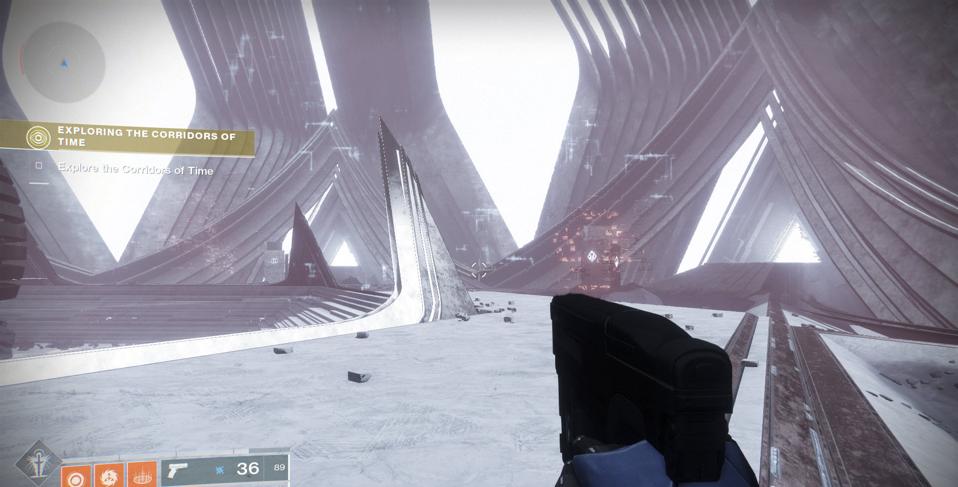 All in all I have been happy with the events of this week because as ever, the fun is in the journey, not the destination and all that. This journey was pretty excellent to witness as I have not seen the community united working on something like this in a very, very long time, and this will go down as one of Destiny’s ultimate “remember when?” moments. As an experiment, I think the puzzle worked, despite some flaws, and that was the best part of the process.

Bastion wasn’t the right call for the reward here. A quest this long and this secretive needed a reward to match, and the roadmap-teased Bastion wasn’t it. This was the time for a big new story development, a content unlock, a beloved classic weapon or something brand new and exciting. Not something we thought would be here in a week anyway.

In the end, I still have to say congrats to Bungie for a well-designed puzzle and congrats to the community and its leaders for solving it. More thoughts on all this to come but until then I have uh, some public events to do, apparently.