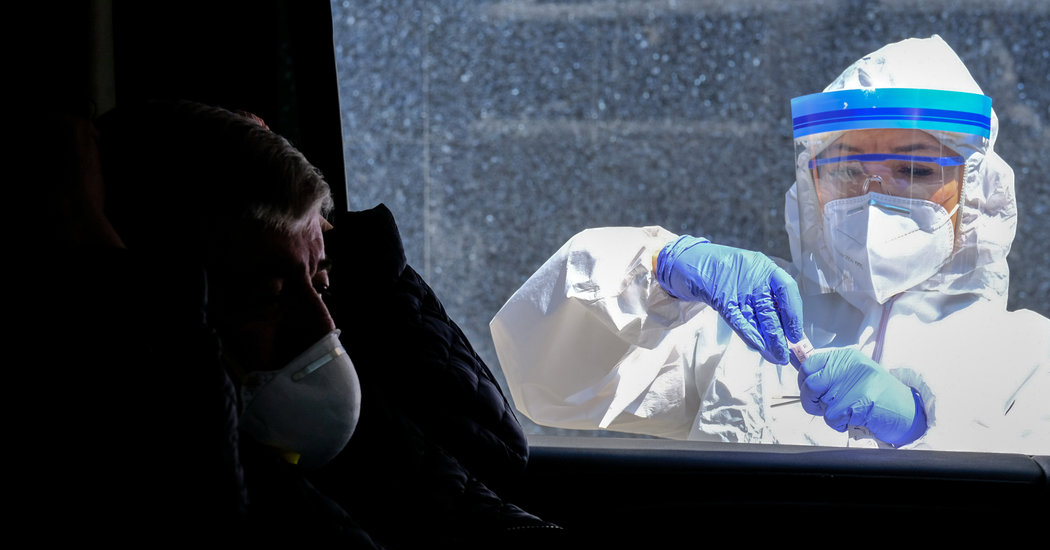 WASHINGTON — A dispute between Democrats and the White House over how to handle coronavirus testing emerged on Monday as one of the most significant sticking points as negotiators struggled to finalize a nearly $500 billion bipartisan agreement to replenish a loan program for small businesses and provide more funding for hospitals and testing.

Democrats are pushing to include a requirement in the measure, which is likely to include $25 billion for testing, that the Trump administration establish a national testing strategy, a move the president and Republicans have resisted, insisting on leaving those decisions to each state.

The impasse hindering the latest round of federal aid to respond to the coronavirus pandemic reflects a broader disagreement over how to handle testing, a crucial element of the government response on which the Trump administration has been roundly criticized for falling short. President Trump and members of his team have boasted repeatedly about the amount of testing available and pressured governors to accelerate testing in their states. Governors have repeatedly appealed for more federal funding and other help — or, in the case of Gov. Larry Hogan of Maryland, taken matters into their own hands and negotiated with suppliers on their own to obtain test kits.

Democrats argue that a national testing strategy is crucial to combating the spread of the coronavirus and allowing states to plan for eventual reopening. But Republicans, wary of placing the political onus on the administration to devise and implement such a strategy, have argued that states should set their own plans.

And Mr. Trump appeared to reject the Democrats’ proposal on Monday, saying that they were “playing a very dangerous political game” by focusing on testing. “States, not the Federal Government, should be doing the Testing,” Mr. Trump wrote on Twitter.

Negotiators were also still haggling over the terms of the new aid for small businesses, hospitals, and a Democratic demand for funds for state and local governments, but despite the disagreements, leaders said a deal was in sight. The bulk of the money would be designated for the Paycheck Protection Program, which was created by the stimulus law approved last month and allows companies that keep paying their employees to receive forgivable loans underwritten by the federal government.

Congressional leaders and administration officials negotiated through the day on Monday, and Senate leaders scheduled a session for Tuesday afternoon, signaling optimism that they could resolve the issue and quickly approve the funds without a formal vote that would require senators to return to Washington.

“We’re getting closer,” Senator Mitch McConnell, Republican of Kentucky and the majority leader, told reporters on Monday, donning a blue surgical mask as he departed the Capitol. Asked about the holdup, he said, “We’re still in discussions.”

Later on Monday, Speaker Nancy Pelosi told House Democrats during a conference call that she was hopeful a deal could be reached by the end of the night, according to two people familiar with the private conversation, who spoke about it on condition of anonymity. Representative Steny H. Hoyer of Maryland, the majority leader, said that he was planning for a vote on Wednesday, but that it could slip to Thursday.

Mr. Trump, speaking at a coronavirus task force briefing Monday evening, said that “tremendous progress” had been made, and that he hoped to see a Senate vote Tuesday.

But Democrats were continuing to insist on bolstering national testing efforts.

“Senate Democrats are fighting for our $30 billion plan for a comprehensive national testing strategy,” Senator Chuck Schumer of New York, the minority leader, said on Twitter. “Because we need major new investments to bolster the supply and manufacturing chain and significantly expand free testing for all, reporting and contact tracing.

The $349 billion initially provided for the small business loan program ran out on Thursday after Democrats blocked an effort to approve the administration’s request for $250 billion in new funding. Without the money, banks could no longer offer loans to small businesses, leaving millions of applications in limbo.

Mr. McConnell accused Democrats on Monday of “prolonging their discussions with the administration” and delaying a final agreement. “It is past time to get this done for the country,” he said.

While talks continued on Monday, lawmakers appeared to be coalescing around providing $310 billion to replenish the Paycheck Protection Program and reserving $60 billion of that for smaller financial institutions; adding $60 billion for the Small Business Administration’s disaster relief fund; and devoting an additional $75 billion for hospitals and $25 billion for testing. In addition to a broader testing policy, Democrats were also still pushing to include funds to assist state and local governments.

Mr. Mnuchin and Mr. McConnell told Republican senators in a conference call Sunday afternoon that they would not include additional aid for state and local governments. Mr. Trump told reporters, “That will be in our next negotiation.”

Senate leaders are hoping to approve any deal during a procedural session to avoid having lawmakers come back to Washington before their scheduled May 4 return — a maneuver that would require agreement from all 100 senators. Mr. McConnell told reporters that he could not confidently say whether that was feasible until negotiators produced a compromise.

Some House Republicans have objected to the prospect of approving another sweeping increase in spending without a roll-call vote, and some Democrats have begun to register objections of their own, arguing that the emerging agreement does not provide enough aid.

“I’m not here with the luxury of time,” she added. “I need legislation that is going to save people’s lives.”