Donald Trump has fired the inspector general for the intelligence community who handled the whistleblower complaint that led to his impeachment, prompting fierce criticism from Democrats.

The US president chose a Friday night, with America consumed by the coronavirus pandemic, to tell the House of Representatives and Senate intelligence committees of his decision to dismiss Michael Atkinson.

In a letter, Trump claimed it was “vital” that he had confidence in the appointees serving as inspectors general, and “that is no longer the case with regard to this inspector general”.

The president would nominate an individual who has his full confidence at a later date, he added.

Trump, the whistleblower and the comic: key players in the Ukraine scandal

There was swift condemnation from Democrats. Chuck Schumer, the minority leader in the Senate, said: “President Trump fires people for telling the truth.

“Michael Atkinson is a man of integrity who has served our nation for almost two decades. Being fired for having the courage to speak truth to power makes him a patriot.”

Adam Schiff, chairman of the House intelligence committee and a prominent figure in the impeachment hearings, described the move as “yet another blatant attempt by the president to gut the independence of the intelligence community and retaliate against those who dare to expose presidential wrongdoing”. 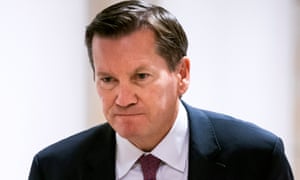 He added: “At a time when our country is dealing with a national emergency and needs people in the intelligence community to speak truth to power, the president’s dead of night decision puts our country and national security at even greater risk.”

Neera Tanden, president of the Center for American Progress think tank in Washington, tweeted: “Leave it to Trump to use a global pandemic as cover for his retaliation against those who helped bring to light his wrongdoing. Disgusting.”

Atkinson was the first official to alert Congress last year to an anonymous whistleblower complaint that described a phone call in which Trump pressured the president of Ukraine to announce an investigation into his political rival, Joe Biden.

In letters to Congress in August and September, Atkinson said he believed the complaint was urgent and credible. But Joseph Maguire, who was acting director of National Intelligence at the time, decided it was not urgent and tried to withhold the complaint from Congress.

Under huge political pressure, the White House eventually released the complaint, triggering an investigation by the Democratic-controlled House, which charged Trump with abuse of power and obstruction of Congress and voted to impeach a president for only the third time in history.

Trump was acquitted by the Republican-controlled Senate in February in what critics described as a show trial with no documents or witnesses allowed. Nevertheless, the president claimed he had been vindicated following a “witch hunt” and purged two officials who testified.

Trump chose Atkinson, who had served in the justice department for 15 years, for inspector general in late 2017 and he was confirmed in May 2018. At his Senate confirmation hearing, Atkinson promised whistleblower protection that “validates moral courage without compromising national security and without retaliation”.

In November last year, the New York Times reported that Trump had discussed with aides the possibility of firing Atkinson because he could not understand why the inspector general failed to dismiss the complaint. In a tweet, he suggested that Atkinson should be forced to testify at the impeachment hearings.

The removal of Atkinson fits a long pattern of retribution against the intelligence community. In May 2017 he fired James Comey, the director of the FBI, who was leading an investigation into his contacts with Russia during the presidential election.

More recently Maguire was also ousted and replaced by Richard Grenell, who had been US ambassador to Germany and is a strong Trump backer. The president has nominated Texas Congressman John Ratcliffe to the permanent position but he must await Senate confirmation.

Last month more than a hundred intelligence and national security professionals signed a joint letter warning that Trump “has created an existential danger to the United States” and endorsing Biden for president.