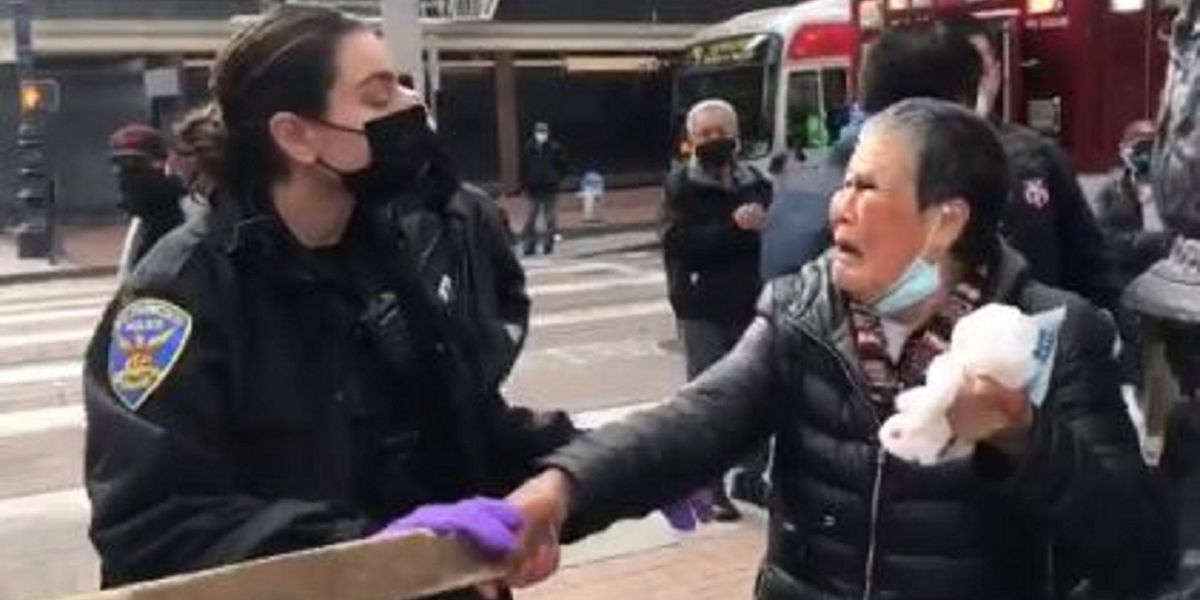 Attacks against Asian Americans have been on the rise in the U.S. according to reports, but one elderly woman in San Francisco fought back — and apparently won — after a man allegedly sucker punched her in an unprovoked attack Wednesday morning.

The 79-year-old victim pummeled the perpetrator with a board, leaving him on a stretcher and a trip to the hospital. In the end, one witness says, “the police were holding her back.”

KPIX-TV Sports Director Dennis O’Donnell stumbled upon the aftermath and took footage of the scene, which showed the woman (whose name has not been publicly released) with visible injuries to her face.

She repeatedly points to a bloodied male on a stretcher — who was being tended to by paramedics — then raises the board and sobs as officers talk her down and ask her to lower it.

“The woman said that she was hit. She attacked back,” O’Donnell said. “From what I could see, she wanted more of the guy on the stretcher and the police were holding her back.”

“You bum, why did you hit me?” the woman said in Chinese to the man on the stretcher, according to KPIX. “The woman then turned to the crowd of people who had gathered, saying, ‘This bum, he hit me,’ as she raised the stick she held and sobbed. ‘He hit me, this bum.'”

That “bum” is also accused of attacking another elderly Asian victim the same morning.

The attacker, who was said to be 39 years old, was arrested after he assaulted an 83-year-old Asian male and fled on foot, the San Francisco Police Department told the Washington Examiner in an email. He struck the 79-year-old woman while fleeing a security guard who witnessed the first attack and was later detained, SFPD added.

Police did not disclose a motive for the attack, KPIX reported, and it was not clear whether the victim’s race had anything to do with the assault.

Hate crimes against Asian Americans rose 150% in 2020, even as hate crimes overall declined. In January, a 91-year-old man was shoved to the ground in Oakland’s Chinatown. An assault in San Francisco killed 94-year-old Vichar Ratanapakdee, while another assault left 75-year-old Pak Ho dead in Oakland last week.