CAMBRIDGE, Mass. — Senator Elizabeth Warren of Massachusetts dropped out of the presidential race on Thursday, ending a run defined by an avalanche of policy plans that aimed to pull the Democratic Party to the left and appealed to enough voters to make her briefly a front-runner last fall.

Though her vision excited progressives, it did not generate enough excitement among the party’s working-class and diverse base, and her support had eroded by Super Tuesday. In her final weeks as a candidate she effectively drove former Mayor Michael R. Bloomberg of New York, a centrist billionaire, out of the race with debate performances that flashed her evident skills and political potential.

She entered the race railing against the corrosive power of big money, and one long-term consequence of her campaign is that Ms. Warren demonstrated that someone other than Senator Bernie Sanders, and his intensely loyal small-dollar donors, could fund a credible presidential campaign without holding fund-raisers.

Her potential endorsement is highly sought after in the race and both Mr. Sanders and former Vice President Joseph R. Biden Jr. have spoken with Ms. Warren since Super Tuesday, when the end of her campaign appeared imminent.

Addressing supporters and the press in front of her house in Cambridge, Ms. Warren said that, from the start, she had been told there were only two true lanes in the 2020 contest: a liberal one dominated by Mr. Sanders, 78, and a moderate one led by Mr. Biden, 77.

“I thought that wasn’t right,” Ms. Warren said, “But evidently I was wrong.”

What had began as the most diverse Democratic presidential field in American history — including six women — is now essentially down to two white men.

Ms. Warren said she would not be immediately making an endorsement in the race but left open the possibility she would do so in the near future. “I need some space around this,” she said.

Ms. Warren’s political demise was a death by a thousand cuts, not a dramatic implosion but a steady decline. Last October, according to most national polls, Ms. Warren was the national pacesetter in the Democratic field. By December, she had fallen to the edge of the top tier, wounded by a presidential debate in which her opponents relentlessly attacked her, particularly on her embrace of “Medicare for all.”

She invested heavily in the early states, with a ground game that was the envy of her rivals. But it did not pay off: In Iowa, where she had bet much of her candidacy — she had to take out a $3 million line of credit ahead of the caucuses to ensure she could pay her bills in late January — she wound up in a disappointing third place.

She would never finish better.

Ms. Warren slid to fourth in New Hampshire and Nevada, and to fifth in South Carolina. By Super Tuesday, her campaign was effectively over — with the final blow of a third-place finish in the primary of her home state, Massachusetts.

The California results strikingly laid bare the demographic cul-de-sac her candidacy had become as Ms. Warren struggled to win over voters beyond college-educated white people, in particular white women. She was above the 15 percent threshold to win delegates, as of Thursday, in only a handful of highly educated liberal strongholds: places like San Francisco, Silicon Valley, Santa Monica and West Hollywood. 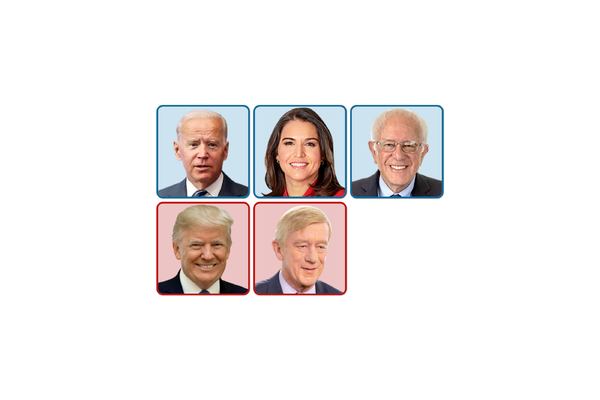 Though the campaign failed to generate the widespread backing necessary to win the nomination, Ms. Warren always retained a core set of fiercely loyal supporters and staff — dedicated to the project of bringing her promised “big, structural change” to the Democratic Party.

Her selfie lines were filled with well-wishers — young girls seeking her trademark pinky promise (“I’m running for president because that’s what girls do”), cutouts of Ms. Warren’s likeness, and tattoos of her adopted slogan: “Nevertheless, she persisted.”

On Thursday, as her staff gathered, many were clad in liberty green, the color her campaign adopted to symbolize its togetherness.

“One of the hardest parts of this is all those pinky promises,” a visibly emotional Ms. Warren said in Cambridge.

She described the impact of gender as “the trap question” for every female candidate.

“If you say, ‘Yeah, there was sexism in this race,’ everyone says, ‘Whiner!’” Ms. Warren said. “If you say, ‘No, there was no sexism, about a bazillion women think, ‘What planet do you live on?’”

Before her exit, Ms. Warren accumulated the second-largest number of Democratic delegates of any woman to ever run for president in American history, behind only Hillary Clinton, the 2016 Democratic nominee.

The party’s left lane is now clearer for Mr. Sanders, who had a more muted showing on Super Tuesday than polls had predicted. The Sanders campaign will now aim to attract enough of Ms. Warren’s ideologically progressive supporters to put him over the top in a closely contested primary.

Supporters of Mr. Sanders and others in the progressive movement have spent the last 36 hours gingerly reaching out to those in Ms. Warren’s orbit and plotting in private conversations about how to keep the two liberal standard-bearers in the race aligned through the rest of the primary season.

Ms. Warren arrived on the political scene in the aftermath of the 2008 financial collapse and shot to superstardom with her indictments of Wall Street and unfettered capitalism.

In 2016, some progressive organizations mounted “Run Warren Run” campaigns and her eventual presidential rival, Mr. Sanders, floated her name as a possible challenger to Mrs. Clinton, but Ms. Warren declined to run.

Four years later, when Ms. Warren did decide to pursue the Democratic nomination, she entered a changed political terrain. Mr. Sanders’s political stock had soared after his 2016 run, giving him an immediate advantage in fund-raising and name recognition that complicated Ms. Warren’s electoral path.

And Donald J. Trump was not just a reality TV star and one of many potential Republican rivals in 2020. He was the president, and his election seemed to shock the Democratic base into an electability-induced stupor. Voters constantly second-guessed their electoral choices as they tried to game out which candidate would be best equipped to beat him.

Mr. Biden, in particular, has capitalized on this anxiety.

Ms. Warren’s allies and supporters said the question of electability — who would be the surest bet to defeat the president — disproportionately hurt women candidates after Mrs. Clinton’s unexpected loss in 2016.

“All they heard all along was what a risk the women were,” said Christina Reynolds, a vice president of Emily’s List, a leading Democratic women’s group that endorsed Ms. Warren earlier this week, only after Senator Amy Klobuchar withdrew.

Ms. Reynolds said that evaluation was as wrong as it was widespread. “You had voters at the end trying to decide based on who would best beat Donald Trump or who would be the strongest, and being told that women were not that,” she said. “The idea that that doesn’t hang around the women’s necks is crazy.”

Ms. Warren’s campaign had been slow to directly address questions of electability, seeming to believe her rise in the polls last year spoke for itself. But as the calendar turned to 2020, it was apparent that the issue was hobbling her candidacy. At town halls and in photo lines, precinct captains and volunteers would tell Ms. Warren that it was what they were hearing from voters.

At recent events, Ms. Warren had taken to speaking to voters directly about their electability fears, imploring them to tune out pundits who were writing her off and vote their own conscience.

“Here’s my advice: Cast a vote that will make you proud,” Ms. Warren told voters on Super Tuesday, speaking in Detroit. “Cast a vote from your heart.”

Though her allies stress structural barriers, Ms. Warren’s shortcomings as a candidate were also linked to her operation.

At times, Ms. Warren’s campaign did not reflect the urgency of a candidacy trying to make history, not only as the first female president, but also through a program of systemic upheaval that would include government-run health care, free public college, student debt cancellation, breaking up big tech companies, universal child care, and significant tax increases on the wealthiest individuals and corporations.

In a series of speeches, Ms. Warren sought to elevate the stories of women, often women of color. Her final major address, in East Los Angeles on the eve of Super Tuesday, was about Latina janitors who organized for better working conditions.

Aimee Allison, the founder and president of She The People, a political advocacy organization for women of color, praised Ms. Warren for the intentional inclusivity of her campaign. “She really comes up as the first white candidate for president who had an intersectional politics,” she said.

But Ms. Allison acknowledged that pitch did not find favor in the broader minority electorate, even as it won plaudits from academics and activists.

“Black voters really were looking for a return to normalcy,” she said. “It was a rejection from what was perceived as riskier politics and a broader and more courageous political vision.”

During debates ahead of the votes in Iowa and New Hampshire, two states where Ms. Warren had invested many of her presidential hopes, she took a back seat to other candidates like Pete Buttigieg and Ms. Klobuchar. Her campaign chose not to invest heavily in television advertising, and was outmatched on the airwaves in early voting states. Its bet on organizing staff failed to change the picture.

She had also embraced a vague message declaring her the “unity candidate,” dropping the policy-focused message that had seemed to resonate with voters early on and pitching herself as the electoral compromise between the left wing dominated by Mr. Sanders and the moderate wing led by Mr. Biden.

It did not work.

Even in the end, Ms. Warren’s supporters never turned on their candidate, or the party that rejected her candidacy. In Illinois, where Ms. Warren’s campaign was scheduled to hold a post-Super Tuesday phone banking session, staff and supporters refused to cancel. They decided to use their time to support Marie Newman, the Illinois congressional candidate running against an incumbent Democrat opposed to abortion rights.

“Our work continues,” Ms. Warren told her staff in the call informing them she was quitting the race. “The fight goes on, and big dreams never die.”