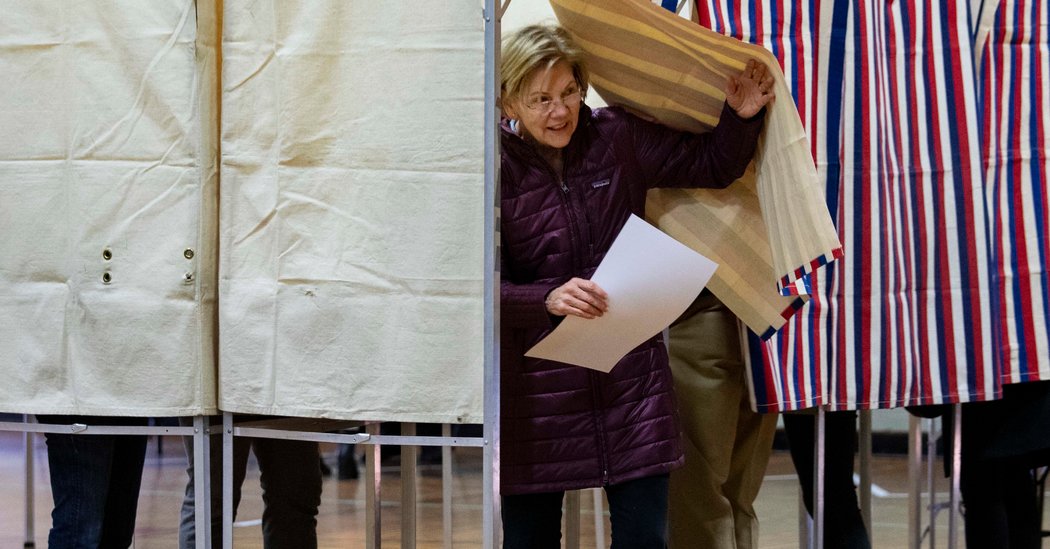 Senator Elizabeth Warren, who last summer rose to the top of polls in several presidential primary states, on Tuesday reached the nadir of her bid for the White House: a third-place finish in her home state, Massachusetts.

Ms. Warren lost after liberal voters split sharply between her and Senator Bernie Sanders of Vermont, who flew into the state last weekend to campaign in hopes of dealing her a powerful setback. But instead it was former Vice President Joseph R. Biden Jr. who came in first place in Massachusetts, winning voters over 50, moderates, black voters and even some liberals.

The result represented her worst-case scenario. Ms. Warren had already finished in third place or worse in the early nominating states of Iowa, New Hampshire, Nevada and South Carolina. That left her on the sidelines after Mr. Sanders and Mr. Biden picked up momentum and dominated the 16 Super Tuesday contests, which included delegate-rich states like California, Texas and North Carolina, as well as Democratic strongholds like Massachusetts.

Super Tuesday ended with the campaign effectively a contest between two clear front-runners, Mr. Biden and Mr. Sanders, who have represented the party’s moderate and liberal wings for most of the last year. Ms. Warren competed for months against Mr. Sanders to be the progressive standard-bearer in the race, but on Super Tuesday she did not win any contests.

“It’s clear Massachusetts voters want Biden to face Trump because there’s nothing more important than beating him,” said Mary Anne Marsh, a Democratic strategist based in Boston. “They saw the fight in Biden in South Carolina, and that convinced them he could do it. Warren is known as a fighter in Massachusetts, but she needs to demonstrate it in this campaign with a win or delegates like Biden managed, and that has yet to happen.”

Efforts by Ms. Warren’s campaign this winter to brand her as the party’s “unity candidate,” able to bridge the moderate and liberal wings, left her somewhere in the middle, not the first choice of either group.

Even at home in Massachusetts, she took just 9 percent of moderate voters, and lost across demographics that are crucial to winning the Democratic nomination.

Ms. Warren won just 17 percent of men in Massachusetts. And she was wiped out among voters without a college degree: Only 15 percent backed her.

Even among her strongest demographic group — white college-educated women — Ms. Warren had just 33 percent support, not nearly enough to offset her weakness with other groups.

And while Ms. Warren performed poorly in Massachusetts, it was her best state of the night. Late Tuesday, she had met the 15 percent threshold to win delegates in just five of the 14 states holding Super Tuesday primaries.

“While this is obviously a disappointing night for Elizabeth Warren, it is less an anti-Warren statement than a coalescing around Biden to beat Donald Trump,” said Meredith Kelly, who was a top aide to Senator Kirsten Gillibrand’s presidential campaign. “She’s the last woman standing, but the value of that is being eclipsed by the need to unify.” (Representative Tulsi Gabbard remains a candidate in the race.)

Ms. Warren’s most ardent supporters said she was unable to overcome the extra hurdles for women running for president. They attributed her weak support among non-college-educated voters to the same sort of biases that badly damaged Hillary Clinton in the 2016 general election against Donald J. Trump.

“No one wants to take sexism seriously,” said Adam Jentleson, a Democratic political operative in close contact with the Warren campaign who has served as an attack dog for her online.

Yet it wasn’t just Massachusetts that rejected her presidential ambitions. She finished third in Iowa and no better than fourth in the other early states, and her highly rated debate performances didn’t translate to enough votes to win her delegates in New Hampshire, Nevada or South Carolina.