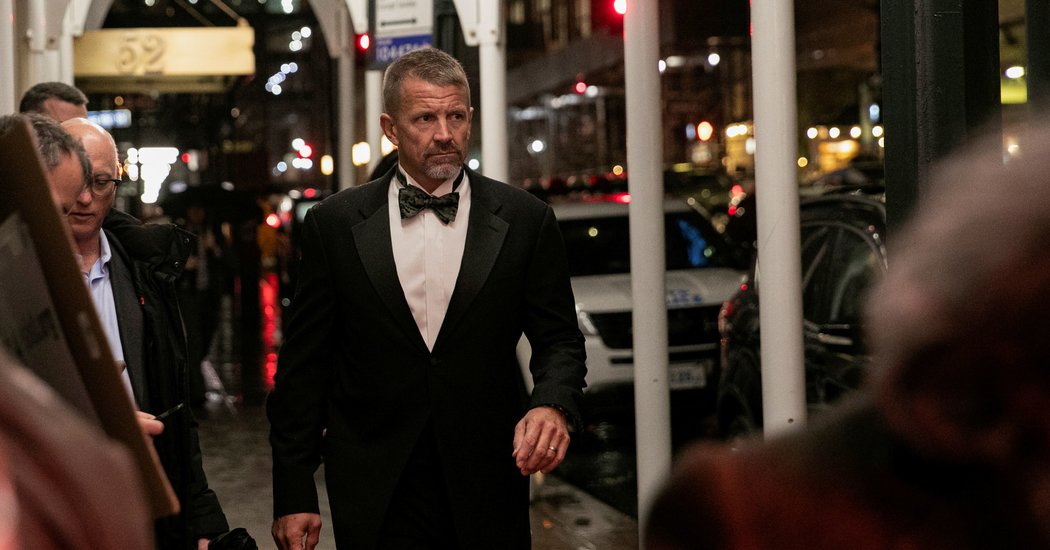 WASHINGTON — Erik Prince, the security contractor with close ties to the Trump administration, has in recent years helped recruit former American and British spies for secretive intelligence-gathering operations that included infiltrating Democratic congressional campaigns, labor organizations and other groups considered hostile to the Trump agenda, according to interviews and documents.

One of the former spies, an ex-MI6 officer named Richard Seddon, helped run a 2017 operation to copy files and record conversations in a Michigan office of the American Federation of Teachers, one of the largest teachers’ unions in the nation. Mr. Seddon directed an undercover operative to secretly tape the union’s local leaders and try to gather information that could be made public to damage the organization, documents show.

Using a different alias the next year, the same undercover operative infiltrated the congressional campaign of Abigail Spanberger, then a former C.I.A. officer who went on to win an important House seat in Virginia as a Democrat. The campaign discovered the operative and fired her.

Both operations were run by Project Veritas, a conservative group that has gained attention using hidden cameras and microphones for sting operations on news organizations, Democratic politicians and liberal advocacy groups. Mr. Seddon’s role in the teachers’ union operation — detailed in internal Project Veritas emails that have emerged from the discovery process of a court battle between the group and the union — has not previously been reported, nor has Mr. Prince’s role in recruiting Mr. Seddon for the group’s activities.

Both Project Veritas and Mr. Prince have ties to President Trump’s aides and family. Whether any Trump administration officials or advisers to the president were involved in the operations, even tacitly, is unclear. But the effort is a glimpse of a vigorous private campaign to try to undermine political groups or individuals perceived to be in opposition to Mr. Trump’s agenda.

Mr. Prince, the former head of Blackwater Worldwide and the brother of Education Secretary Betsy DeVos, has at times served as an informal adviser to Trump administration officials. He worked with the former national security adviser Michael T. Flynn during the presidential transition. In 2017, he met with White House and Pentagon officials to pitch a plan to privatize the Afghan war using contractors in lieu of American troops. Jim Mattis, then the defense secretary, rejected the idea.

Mr. Prince appears to have become interested in using former spies to train Project Veritas operatives in espionage tactics sometime during the 2016 presidential campaign. Reaching out to several intelligence veterans — and occasionally using Mr. Seddon to make the pitch — Mr. Prince said he wanted the Project Veritas employees to learn skills like how to recruit sources and how to conduct clandestine recordings, among other surveillance techniques.

James O’Keefe, the head of Project Veritas, declined to answer detailed questions about Mr. Prince, Mr. Seddon and other topics, but he called his group a “proud independent news organization” that is involved in dozens of investigations. He said that numerous sources were coming to the group “providing confidential documents, insights into internal processes and wearing hidden cameras to expose corruption and misconduct.”

“No one tells Project Veritas who or what to investigate,” he said.

Mr. Prince is under investigation by the Justice Department over whether he lied to a congressional committee examining Russian interference in the 2016 election, and for possible violations of American export laws. Last year, the House Intelligence Committee made a criminal referral to the Justice Department about Mr. Prince, saying he lied about the circumstances of his meeting with a Russian banker in the Seychelles in January 2017.

Once a small operation running on a shoestring budget, Project Veritas in recent years has had a surge in donations from both private donors and conservative foundations. According to its latest publicly available tax filing, Project Veritas received $8.6 million in contributions and grants in 2018. Mr. O’Keefe earned about $387,000.

Last year, the group received a $1 million contribution made through the law firm Alston & Bird, a financial document obtained by The New York Times showed. A spokesman for the firm said that Alston & Bird “has never contributed to Project Veritas on its own behalf, nor is it a client of ours.” The spokesman declined to say on whose behalf the contribution was made.

The financial document also listed the names of others who gave much smaller amounts to Project Veritas last year. Several of them confirmed their donations.

The group has also become intertwined with the political activities of Mr. Trump and his family. The Trump Foundation gave $20,000 to Project Veritas in 2015, the year that Mr. Trump began his bid for the presidency. The next year, during a presidential debate with Hillary Clinton, Mr. Trump claimed without substantiation that videos released by Mr. O’Keefe showed that Mrs. Clinton and President Barack Obama had paid people to incite violence at rallies for Mr. Trump.

In a book published in 2018, Mr. O’Keefe wrote that Mr. Trump years earlier had encouraged him to infiltrate Columbia University and obtain Mr. Obama’s records.

Last month, Project Veritas made public secretly recorded video of a longtime ABC News correspondent who was critical of the network’s political coverage and its emphasis on business considerations over journalism. Many conservatives have gleefully pounded on Project Veritas’s disclosures, including one particularly influential voice: Donald Trump Jr., the president’s eldest son.

Mr. Seddon regularly updated Mr. O’Keefe about the operation against the Michigan teachers’ union, according to internal Project Veritas emails, where the language of the group’s leaders is marbled with spy jargon.

They used a code name — LibertyU — for their operative inside the organization, Marisa Jorge, who graduated from Liberty University in Virginia, one of the nation’s largest Christian colleges. Mr. Seddon wrote that Ms. Jorge “copied a great many documents from the file room,” and Mr. O’Keefe bragged that the group would be able to get “a ton more access agents inside the educational establishment.”

The emails refer to other operations, including weekly case updates, along with training activities that involved “operational targeting.” Project Veritas redacted specifics about those operations from the messages.

In August 2017, Ms. Jorge wrote to Mr. Seddon that she had managed to record a local union leader talking about Ms. DeVos and other topics.

“Good stuff,” Mr. Seddon wrote back. “Did you receive the spare camera yet?”

As education secretary, Ms. DeVos has been a vocal critic of teachers’ unions, saying in 2018 that they have a “stranglehold” over politicians at the federal and state levels. She and Mr. Prince grew up in Michigan, where their father made a fortune in the auto parts business.

AFT Michigan sued Project Veritas in federal court, alleging trespassing, eavesdropping and other offenses. The teachers’ union is asking for more than $3 million in damages, accusing the group of being a “vigilante organization which claims to be dedicated to exposing corruption. It is, instead, an entity dedicated to a specific political agenda.”

Project Veritas has said its activities are legal and protected by the First Amendment, and the case is scheduled to go to trial in the fall.

Other Project Veritas employees on the emails include Joe Halderman, an award-winning former television producer who in 2010 pleaded guilty to trying to extort $2 million from the comedian David Letterman. Mr. Halderman was copied on several messages providing updates about the Michigan operation, and in one message, he gave instructions to Ms. Jorge. Project Veritas tax filings list Mr. Halderman as a “project manager.”

Two other employees, Gaz Thomas and Samuel Chamberlain, were also identified in emails and appeared to play important roles in the Michigan operation. Efforts to locate Mr. Thomas were unsuccessful. A man named Samuel Chamberlain who matched the description of the one employed by Mr. O’Keefe denied he worked for Project Veritas. He did not respond to follow-up phone messages or an email.

Last year, Project Veritas submitted a proposed list of witnesses for the trial over the lawsuit. Mr. Chamberlain and Mr. Thomas were on the list. Mr. Seddon was not.

Ms. Jorge, 23, did not respond to email addresses associated with her Liberty University account. In an archived version of her LinkedIn page, Ms. Jorge wrote she had a deep interest in the conservative movement and hoped one day to serve on the Supreme Court after attending law school.

In a YouTube video, Mr. O’Keefe described the lawsuit as “frivolous” and pointed to a portion of the deposition in which David Hecker, the president of AFT Michigan, said that one of the goals of the lawsuit was to “stop Project Veritas from doing the kind of work that it does.”

Randi Weingarten, the president of the American Federation of Teachers, said in a statement: “Let’s be clear who the wrongdoer is here: Project Veritas used a fake intern to lie her way into our Michigan office, to steal documents and to spy — and they got caught. We’re just trying to hold them accountable for this industrial espionage.”

In 2018, Ms. Jorge infiltrated the congressional campaign of Ms. Spanberger, posing as a campaign volunteer. At the time, Ms. Spanberger was running to unseat a sitting Republican congressman in a race both parties considered important for control of the House. Ms. Jorge was eventually exposed and kicked out of the campaign office.

It was unclear whether Mr. Seddon was involved in planning that operation.

Mr. Seddon was a longtime British intelligence officer who served around the world, including in Washington in the years after the attacks of Sept. 11, 2001. He is married to an American diplomat, Alice Seddon, who is serving in the American consulate in Lagos, Nigeria.

In that deposition, Mr. O’Keefe defended the group’s undercover tactics, saying they were part of a long tradition of investigative journalism going back to muckraking reporters like Upton Sinclair. “I’m not ashamed of the methods that we use or the recordings that we use,” he said.

He was asked whether he had provided any of the group’s secret recordings of Democracy Partners to the Republican National Committee or any member of the Trump family. He said that he did not think so.

In 2010, Mr. O’ Keefe and three others pleaded guilty to a federal misdemeanor after admitting they entered a government building in New Orleans under false pretenses as part of a sting.