With over 33 million Americans joining the ranks of the unemployed in the last seven weeks, Congress will need to decide soon whether it will continue the $600 expanded unemployment program set to expire by the end of July as it begins debate on a fourth major coronavirus stimulus bill. 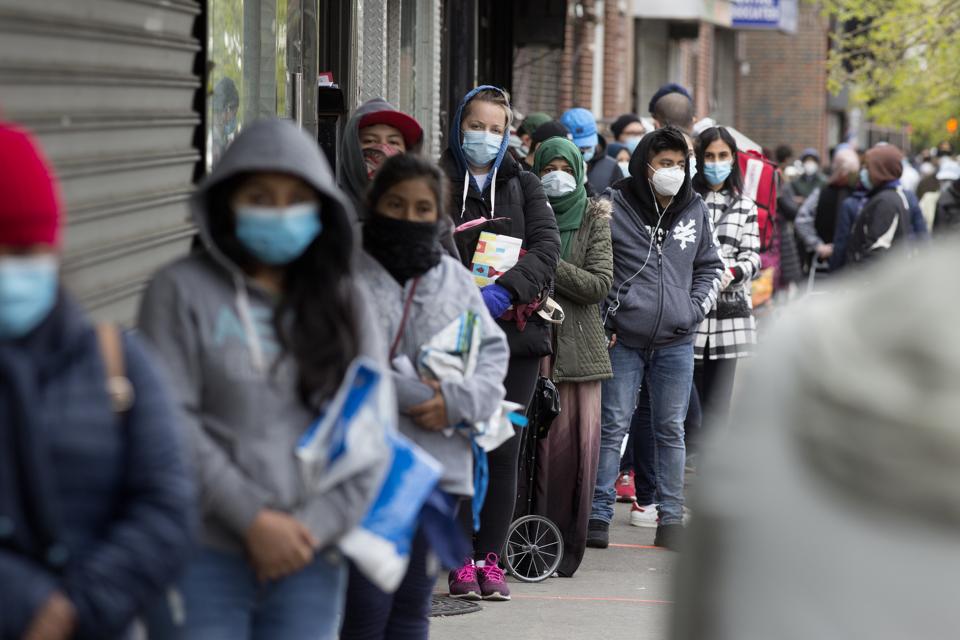 BROOKLYN, NY – MAY 8: Citizens wearing protective masks form lines to receive free food from a food … [+] pantry run by the Council of Peoples Organization on May 8, 2020 in the Midwood neighborhood of Brooklyn, New York. As unemployment claims continue to increase in New York City, the lines for free food continue to grow. (Photo by Andrew Lichtenstein/Corbis via Getty Images)

In the stimulus bill passed by Congress in March, lawmakers included a $600 across-the-board boost to states’ unemployment payouts for four months.

Despite their gripes with the expanded unemployment program, Republican lawmakers bit their tongues and voted in large numbers for the bill, but many GOP lawmakers are pumping the brakes this time around.

During a panel for reopening his home state with fellow South Carolina Sen. Tim Scott (R-S.C.), Sen. Lindsey Graham (R-S.C.) said that the boosted unemployment program would be extended “over our dead bodies.”

Democrats, for their part, are mostly supportive of extending the increased unemployment program in a new round of stimulus legislation but they’re unclear of which path to take: House Speaker Nancy Pelosi (D-Calif) has proposed everything from using so-called “automatic stabilizers” that tie stimulus programs to economic triggers to relief programs running, to a paycheck guarantee program.

Republicans are worried about continuing the expanded unemployment program because they argue it incentivizes certain people not to work: the $600 increase means that some workers have received more on unemployment than they would during a job; one GOP proposal in March that gained support called for capping the boosted payment at 100% of what the worker was making before the pandemic.

Sen. Ron Wyden (D-Ore.), one of the chief architects of the expanded unemployment in the last major stimulus bill, told the New York Times that he believed the program would need to be re-upped at the end of July.

“I think there is going to be a need based on the economic conditions at the end of July for the workers to get an additional boost,” Wyden said.

The price tag. Republicans, typically wary of big government spending, have backed funding big stimulus programs since the outbreak began but may show discomfort at the price tag of the next bill. The $2 trillion spending bill passed the Senate unanimously, 96-0, with Senate Majority Leader Mitch McConnell pressuring Republicans to fall in line.

This time around, McConnell, and other Republicans, are hitting the pause button.

Still, most lawmakers from both parties agree that more aid is needed to address the economic fallout from the coronavirus outbreak, even after Congress passed a sweeping $2 trillion aid package at the end of March. Democrats — and even President Trump — have expressed interest in sending more money to Americans, arguing the $1200 cash payments millions received under the last bill aren’t enough. One of Democrats’ top priorities will be aid for state and local governments, which have lost significant tax revenue as a result of the pandemic, and hospitals. Trump has been particularly keen on including a payroll tax cut in any next stimulus bill, a priority Treasury Secretary Steve Mnuchin reiterated on Sunday. McConnell and some other Republicans want to include liability protections for employers.

More Direct Payments And State And Local Aid: Here’s What Might Be In The Next Stimulus Bill (Forbes)