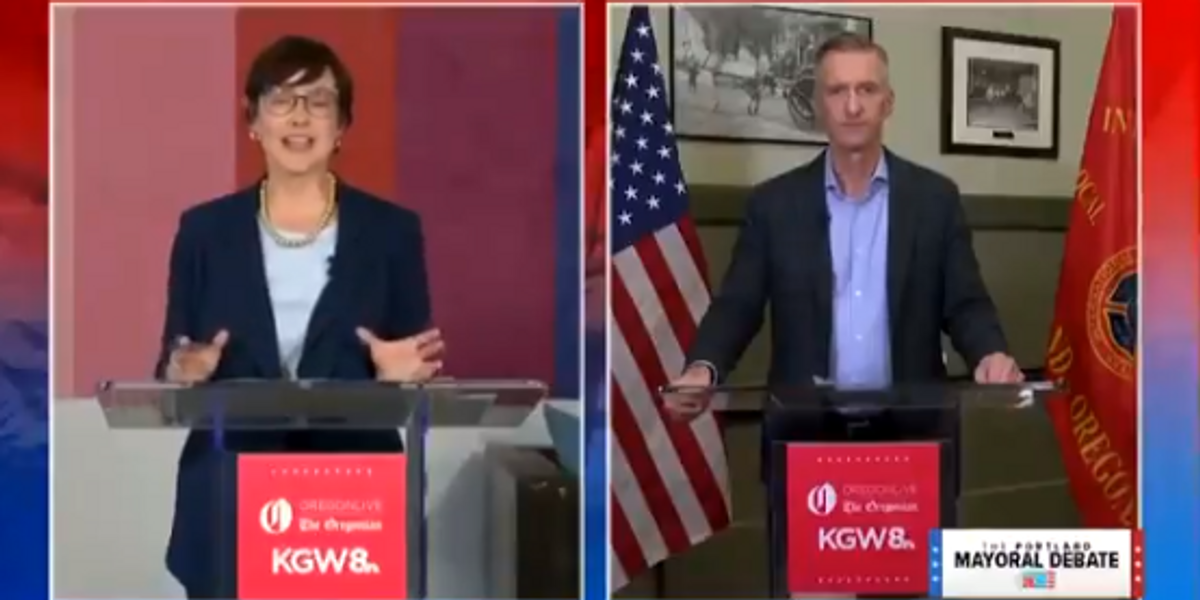 Far-left Portland mayoral candidate Sarah Iannarone praised Joe Biden for his comment about Antifa from the first presidential debate, where he said, “Antifa’s an idea, not an organization.” This comes at a time when Iannarone leads incumbent Portland Mayor Ted Wheeler (D) by double digits.

The eye-opening statement was made during Thursday night’s debate between the candidates running for Portland mayor. KGW-TV anchor and debate moderator Laural Porter asked Iannarone, “You’ve been called the ‘Antifa Mayor.’ Are you Antifa and how would that guide how you would handle protests as mayor?”

Iannarone responded, “I love that Joe Biden answered this question before me, because being opposed to fascism in 2020 is not something to be embarrassed about.”

“I have a bumper sticker from the beginning of my campaign that says #EverydayAntifascist,” Iannarone said. “And what I have tried to do is normalize peaceful responses to the rise of white nationalism by organizing in my community.”

“This summer when the Proud Boys came to town, I organized a menstrual product drive for my neighbors residing in the women’s center,” the Portland mayoral candidate answered. “Because the answer toxic masculinity is an inclusive, pluralist society where people of all backgrounds feel welcome.”

When she is asked if she is “Antifa,” Iannarone replied, “Antifa is not anything more than an idea, that’s what vice president Biden explained to us. It’s people who oppose anti-fascism. And I strongly oppose anti-fascism and I adopt and implement peaceful responses to that. And that is how I describe my position on this issue.”

“Donald Trump has decided to make the enemy of groups of people who oppose his bullies and his militia forces,” she continued. “But I’m not going to be caught up in that rhetoric because it’s false. It creates division in our society. It creates division in our city. What we need is every single Portlander faced in the right direction, saying ‘Hate is not welcome here.'”

Last year, Iannarone declared, “I am antifa. I stand proudly beside the good people of this city organizing in countless ways every day to oppose hate in its myriad forms.”

There is no shortage of footage from Portland of rioters, who appear to be Antifa supporters, causing massive damage to the city and businesses.

During the debate, a Portland resident asked Iannarone what she would do about the “dangerous and violent” riots and if she would stop the city from being burned down night-after-night.

Iannarone skirted the question about rioters, and instead said she would hold the police accountable.

“We need equal enforcement of the law regardless of who is engaging in criminal activity,” the candidate stated. “And as Portland mayor, I will not be able to control what any individual protester is doing in the streets. My job will be making sure that the police do their jobs, making sure they are held accountable for when they break procedure and even the law. That will be my job as Portland mayor, and ultimately, we’ll have a police force that’s well equipped to enforce the law without racial bias in the future.”

“I condemn violence in all forms,” Iannarone added. “I always have. But we must know that the answer to protests about police brutality cannot be increased police brutality.”

EVEN MORE INSANE: Portland guy asks a really good question about how to stop the Antifa/BLM violence, because citiz… https://t.co/UO6S7Zp2Lb

Speaking of skirts, Iannarone owns a skirt with some communist authoritarians printed on it, including Che Guevera, Joseph Stalin, and Chairman Mao.

Look at the skirt. https://t.co/kAu3a3PgUF

Iannarone gave the Washington Examiner an explanation for wearing the unusual skirt.

“The picture in question was taken with Reverend Billy, whose spectacle of the absurd is a treat whenever it comes to town,” Iannarone said. “I dressed flamboyantly that day in a skirt that features pop art — art that is meant to satirize the subjects. While most Americans are focused on stopping COVID from taking our lives and jobs, some internet commentators are focused on how I dressed during a performance art appearance in 2016. I’m focused on winning a Green New Deal and Housing for All Portlanders, not on false controversy meant to distract from real issues.”

According to a poll of likely voters, Iannarone holds a significant 11-point lead over current Portland Mayor Ted Wheeler. The polls released this week found Iannarone at 41%, Wheeler at 30%, and the remaining 29% split between writing in a candidate (16%) or remaining undecided (13%), according to Willamette Week. The poll has a 4% margin of error.