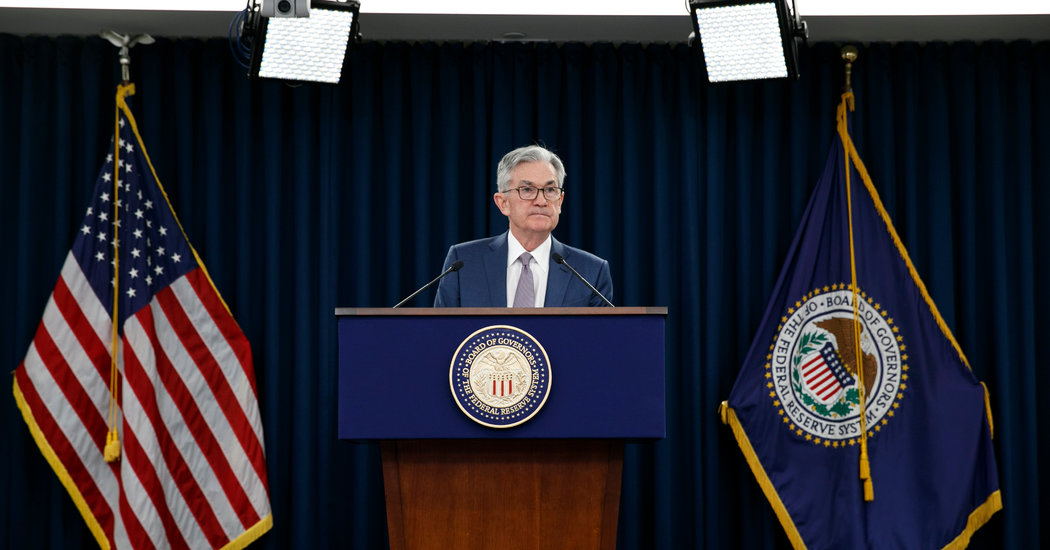 Federal Reserve officials are wrapping up meetings on Wednesday after two months of nonstop action to avert financial calamity as the coronavirus roiled markets and upended the world economy. The gathering is a chance to consider how to position monetary policy for the trials ahead.

The Fed is now back on its regular schedule after two emergency meetings in March. At those sessions and in announcements since, it cut interest rates to zero, rolled out an unlimited bond-buying campaign and set up programs to smooth over corporate and government debt markets.

Policymakers will issue a statement at 2 p.m., and the chair, Jerome H. Powell, will hold a news conference at 2:30.

The Fed’s efforts to protect the economy have outstripped even its response to the 2008 financial crisis.

Officials took weeks, not months, to slash interest rates to rock bottom. They have been buying bonds at a record pace, swelling their balance sheet to $6.6 trillion from less than $4.2 trillion in mid-February. And the Fed’s emergency lending authorities are reaching further this time: The central bank has said it will buy municipal debt and lend to both large and midsize companies, measures it did not take in the darkest days of the last crisis.

The monetary intervention reflects the economic shock at hand. The coronavirus outbreak gripped the world quickly and nearly completely, bringing the gears of modern capitalism — stores, offices, amusement parks and more — to a standstill. Grocers and Amazon cannot plug the gap as perhaps a fifth of U.S. workers lose jobs, conferences and weddings are canceled, and tens of millions are kept home to help stem the pandemic.

For all of the Fed’s activism, its most challenging job comes next. The shock may begin to recede, but it is unclear how quickly the economy can rebound.

A first glimpse at the Fed’s playbook may come Wednesday. Policymakers could hint that they will leave interest rates unchanged for months or years, and some economists think they could offer guidance about their bond-buying plans. Analysts are divided over what details to expect, but one thing seems likely: Mr. Powell will pledge to do whatever it takes to get the country through a tight economic spot.

“This is a transition meeting for them,” said Michael Gapen, chief United States economist at Barclays. It’s “the end of the beginning, not the beginning of the end.”

The financial system remains relatively stable, thanks in part to the central bank’s March efforts, which traders and strategists say kept key bond markets functioning. As a result, credit can continue flowing to businesses and households in need of cash. That’s an important advantage over 2008, when a banking crisis helped to tip off the longest and worst downturn since the Great Depression.

But the economy is a system with many moving parts, so the trajectory and timing of a recovery are unknowable.

Consumers, for example, fuel about 70 percent of the economy. Many have either gone without a paycheck for all or part of the quarantine period or know someone who has. If that makes them more skittish about spending, they could hamstring a recovery.

States are another case in point. After the last recession, state and local budget shortfalls led to public sector layoffs that slowed an already weak crawl back to prosperity. This time, governments have taken an intense hit, threatening again to hold back an economic rebound.

The Fed is setting up emergency programs to help with short-term problems, allowing companies and governments to fund operations more easily.

Officials have been rolling out lending facilities, backed by $454 billion that Congress deposited at the Treasury. One program will buy debt from states, cities and counties, most of it highly rated, helping local governments to meet their cash needs. Two other programs will buy corporate debt, and the promise that they are coming has helped big companies in the credit markets.

Mr. Powell could use his news conference to hash out what comes next for the emergency lending programs. The central bank has earmarked less than half of the funding Congress gave the Treasury to protect against credit losses, so there is plenty left. Many programs are not yet operating.

“You have to get the programs all up and running,” said Michael Feroli, chief U.S. economist at J.P. Morgan. If it’s like throwing spaghetti at the wall, “you have to see what spaghetti sticks.”

Emergency lending programs are aimed more at keeping markets orderly than at stimulating the economy. When it comes to promoting growth, the Fed has limited room: Borrowing costs are already at rock-bottom, and officials have signaled their aversion to negative interest rates.

But there are levers to pull. The Fed could make its bond-buying plans more concrete at this meeting, though many economists think that it will wait for more economic clarity. Officials could also pledge to leave interest rates unchanged for an extended period.

“We expect an overarching commitment that the Fed will use all its tools aggressively to help restore the economy to full employment as rapidly as possible with inflation sustainably at target,” economists at Evercore ISI wrote in a note previewing the meeting.

Mr. Powell may also indicate the Fed’s thinking about its limitations — for example, whether it can continue to buy securities without consequence.

And he could emphasize that if economic shutdowns lift slowly and companies need grants instead of loans to survive, a remedy will fall to Congress.

“These are lending powers, not spending powers,” Mr. Powell said on April 9, after the Fed unveiled many of its newest programs. “The Fed is not authorized to grant money to particular beneficiaries.”