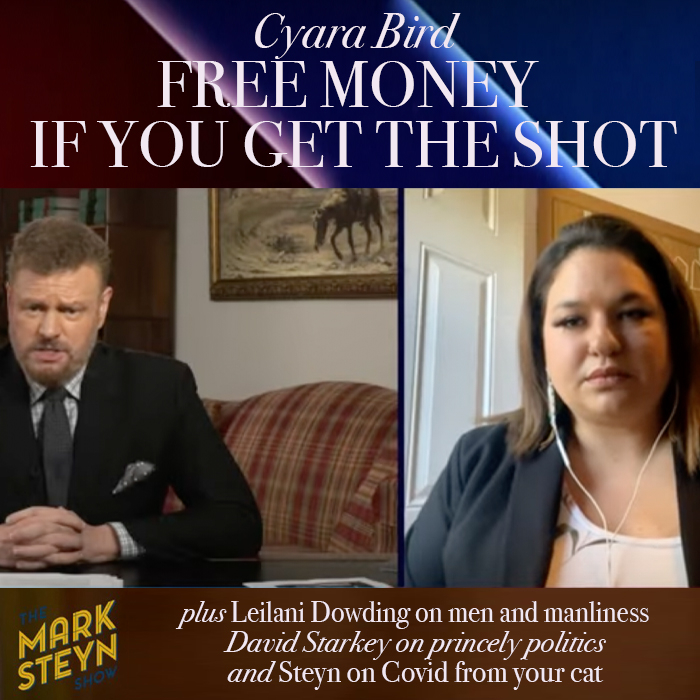 Programming note: On Friday Mark will be hosting another edition of our Clubland Q&A live around the planet. The show starts at 5pm North American Eastern/9pm GMT/10pm British Summer Time.

Thursday’s Mark Steyn Show began with some breaking news on the latest cunning evolution of the ChiCom-19, and continued with Mark’s response to world leaders’ accusations of Putin’s “toxic masculinity”. Leilani Dowding joined him to discuss.

Next up was distinguished historian David Starkey on the Prince of Wales’ highly politicised performance at the Commonwealth Conference, and his prediction that, with William the Woke, worse is to come.

We rounded out the show with a Canadian vaccine victim, Cyara Bird, who is one of many who got paid to take the shot …and will live with the consequences for the rest of her life.

All that plus your comments live as it happens. Click below to view the full hour:

~If you’ve missed a Mark Steyn Show in recent weeks or recent years, you can find all our shows from the year to date and many highlights from the archives in a handy Netflix-style tile format here. Make the most of them while you can because, as Mark’s mentioned, he’s now under investigation from Ofcom. And, as he has also mentioned, you’re not meant to disclose publicly that you’re under investigation from Ofcom…

If you’re a member of The Mark Steyn Club, we thank you for sticking with us as we launch our second half-decade. Feel free to weigh in below, as we love to read your comments. If you’re wondering what the Steyn Club’s all about, you can find more details here – and we also have a great gift membership.

Making Plans for Us

It’s Not a Fair Cop