Its roots stretch back almost 250 years to the Second Continental Congress. Americans consistently rate it their favorite federal agency, and with a work force of more than half a million scattered across the country, it employs more people than any government entity outside the military.

But as Washington begins to battle over the next round of coronavirus relief funding, the United States Postal Service, for many the most familiar face of the federal government, has landed improbably at the center of one of the most bitter political disputes over who should be rescued, and at what cost.

The future of the mail may hang in the balance.

Postal leaders and their allies have made unusually blunt appeals for support in recent weeks, running advertisements on President Trump’s favorite Fox News programs and laying out an urgent account of how the pandemic has had a “devastating effect” on the U.S. mail service. Without a financial rescue from Congress, they have warned, an agency that normally runs without taxpayer funds could run out of cash as soon as late September, raising the specter of bankruptcy and an interruption in regular delivery for millions of Americans.

But after nearly reaching a bipartisan deal for a multibillion dollar bailout in the last coronavirus rescue package in late March, Republicans and Democrats have sharply diverged over whether to provide a lifeline. Now, the fight over the future of the Postal Service has spilled onto the campaign trail, increasingly freighted by deeply held disagreements about labor rights, the role of government versus private enterprise in providing basic services, and voting access.

On one side is President Trump and his Treasury secretary, Steven Mnuchin, who have largely looked at the agency’s worsening bottom line as a problem of its own making.

“The Postal Service is a joke,” Mr. Trump declared recently, announcing that he would not support any additional financial support for the agency unless it raised package rates by 400 percent. The drastic increase, which most independent analysts say would ultimately hurt the Postal Service, appears to be aimed chiefly at Amazon, whose chief executive, Jeff Bezos, owns The Washington Post, and whom Mr. Trump regards as a nemesis.

It was the White House that intervened in March, nixing a bipartisan plan to provide $13 billion to the Postal Service. And administration officials have made it clear that they will not sign off on any financial support — either in the form of a loan or direct funding — unless the Postal Service agrees to rate increases, labor concessions and other changes that would shrink the agency’s footprint, potentially saving money and benefiting private competitors like FedEx and UPS. 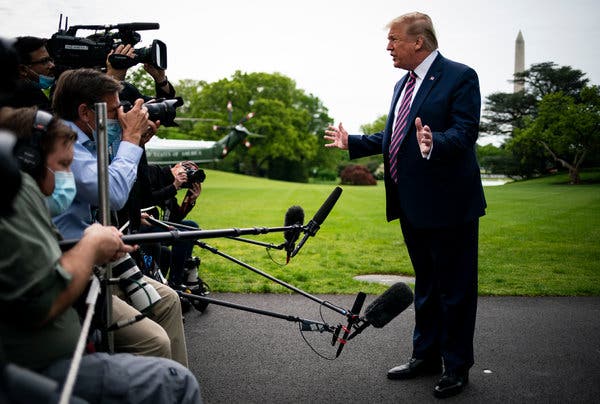 “The Postal Service is a joke,” President Trump said recently.Credit…Al Drago for The New York Times

Democrats, for their part, have positioned themselves as protectors of the agency, joined by large retailers like Amazon and CVS that rely on the Postal Service to deliver millions of packages a year at low rates. In the House, they are preparing to introduce a massive relief bill that would give the agency much of what it has asked for, including $25 billion in direct funding plus additional debt relief measures.

“We have to fight for the post office,” Speaker Nancy Pelosi of California said on Thursday, highlighting the contours of the emerging fight.

In many ways, the position is a natural one for Democrats. The Postal Service has been an engine of growth for the black middle class, and is one of the last strongholds of organized labor in the country, both critical constituencies for the modern Democratic Party. A functioning Postal Service is also a prerequisite for establishing a national vote-by-mail program for the elections in the fall, a priority for Democrats that some Republicans oppose.

But the issue has not always broken down neatly along partisan lines. Congressional Republicans who represent rural areas where the daily mail is an economic and medical lifeline have been some of the agency’s biggest supporters, and they could face political consequences for embracing the president’s position.

But in Alaska, the mail is a vital commodity, delivering goods to remote areas that commercial delivery companies do not serve. On a tele-town hall with constituents recently, Mr. Sullivan said he would defend the Postal Service against any potential cuts.

“It’s a lifeline for so many of our communities,” he said. “We are defenders of all of these programs because you can’t be treated differently just because you’re an American and you live in a village without a road.”

Post office workers in the “dead letter office” in Washington around the turn of the 20th century. The Post office’s history stretches back 250 years.Credit…Frances Benjamin Johnston Collection, via Library of Congress

With the pandemic unfolding in the heat of an election and Mr. Trump largely defining his party’s position, Democrats increasingly believe the issue could give them a political edge. Particularly at a time when Americans stuck at home have become hyper-conscious of their dependence on the mail, public polling suggests bipartisan majorities are in favor of a rescue deal and may even punish lawmakers who stand in the way.

Richard Trumka, the president of the A.F.L.-C.I.O., said the Postal Service’s ubiquity, particularly in rural America, means both parties have traditionally had a vested interest in maintaining its financial stability.

“The Postal Service is like Social Security — it’s beloved by everybody,” Mr. Trumka said in an interview. “If the president or anyone else is seen as trying to debilitate or eliminate the Postal Service, they’ll pay a huge political price.”

In a recent email blast, Tom Perez, the chairman of the Democratic National Committee, said Republicans were trying “to dismantle” the Postal Service, and with it, the jobs of hundreds of thousands of postal employees, as well as the connections between rural, poor and tribal areas to the economy.

Joseph R. Biden Jr., the former vice president and presumptive Democratic presidential nominee, channeled the views of many in his party last month when he suggested that Mr. Trump was trying to bankrupt the Postal Service as a way to prevent vote-by-mail programs and sabotage November’s election. Mr. Trump has asserted that large-scale voting by mail would lead to a spike in turnout that would hurt his party, saying last month that it “doesn’t work out well for Republicans.”

The Postal Service was plagued by financial woes long before the Covid-19 pandemic, having lost billions of dollars a year for the past decade, and bipartisan proposals for reform have kicked around Congress for years. The agency, which makes its money on the sale of postage and other products that have declined in popularity since the advent of email and online billing, has not relied on taxpayer funding for decades, instead issuing debt as losses have mounted.

“We have to fight for the post office,” said Speaker Nancy Pelosi.Credit…Alyssa Schukar for The New York Times

Unlike a private company, it does not have the option of cutting back operations to shrink costs, and a requirement by Congress that it pre-fund a health benefits program for its employees has fueled billions of dollars in debt.

But the coronavirus pandemic has exacerbated the Postal Service’s problems. Even with package deliveries to homebound Americans up sharply, total mail volume is down by roughly a third. The agency projects those numbers could keep dropping, leading to a loss of $23 billion over the next 18 months.

Mr. Mnuchin has begun preliminary conversations with the Postal Service’s leaders about the terms of a loan of up to $10 billion that the Treasury Department is authorized to extend to the agency. Few details of the talks have become public, but a task force led by Mr. Mnuchin in 2018 proposed that the Postal Service raise its rates, begin diverting more work to non-unionized outside contractors, and essentially lease space in the nation’s mailboxes to private delivery services.

Democrats and union leaders have argued those changes would put the agency on a road to privatization. David C. Williams, the vice chairman of the Trump-appointed board of governors and a former postal inspector general, was so uncomfortable over the talks with the Treasury Department that he resigned last month, concerned about the politicization of an organization that is normally unaffected by partisanship, according to people familiar with his thinking.

The White House position has increasingly vocal allies in Congress. Armed with a new report from the Government Accountability Office on the Postal Service’s long-term structural challenges, Representative Jim Jordan of Ohio, the top Republican on the House Oversight Committee, accused Democrats of trying to let the agency off the hook for mistakes that had nothing to do with the coronavirus crisis.

The fight over funding the Postal Service has become a partisan battle.Credit…Paul Ratje/Agence France-Presse — Getty Images

Some other influential Republicans who had been supportive of a bailout appear to be backing away, accusing both the Postal Service and Democrats of making the situation sound more dire than it is.

On Wednesday, Senator Ron Johnson, Republican of Wisconsin and the chairman of the committee overseeing the Postal Service, requested a more detailed account of its finances. Mr. Johnson, who had previously supported allocating funds to prop up the agency, said that data received by his staff suggested actual revenues from mid-March to mid-April were down less than 6 percent compared to the year before.

“That was a far cry from the 30 percent that U.S.P.S. had been publicly projecting,” Mr. Johnson wrote. “Although I have yet to receive official data to confirm this, my understanding is that U.S.P.S. revenues have recently improved — so much so that this April’s revenues were close to equal to those in April 2019.”