The claim was tailor-made for President Trump’s most steadfast backers: Federal guidelines are coaching doctors to mark Covid-19 as the cause of death even when it is not, inflating the pandemic’s death toll.

That the claim came from a doctor, Scott Jensen, who also happens to be a Republican state senator in Minnesota, made it all the more alluring to the president’s allies. Never mind the experts who said that, if anything, the death toll was being vastly undercounted.

“SHOCKING,” tweeted Chris Berg, a conservative television show host on KX4, a Fox affiliate in Fargo, N.D., after interviewing Dr. Jensen last month. Soon after, Laura Ingraham, the Fox News host, invited Dr. Jensen onto her show. His assertions were picked up by Infowars, the conspiracy-oriented website founded by Alex Jones. They were shared by followers of Qanon, who subscribe to a web of vague, baseless theories that a secret cabal in the government is trying to take down the president. 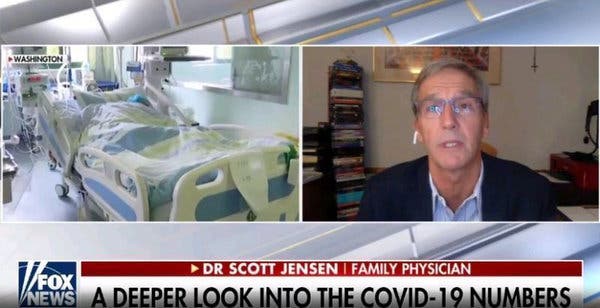 Dr. Scott Jensen, a physician and Minnesota state senator, has claimed that doctors may be inflating the coronavirus death toll, despite experts’ insistence that it is undercounted.

“What is the primary benefit to keep public in mass-hysteria re: Covid-19? Think voting. Are you awake yet?” a Qanon follower known as John the White wrote on Twitter, saying the pandemic was being used to manipulate the electorate.

The likes of John the White may view the world through the most conspiratorial of lenses, but they are hardly the only people weighing the political impact of the virus’s death toll. With implications for how quickly businesses and their employees return to something like normalcy, the fight to shape the official record is adding a grim new front to the presidential campaign.

Since the outset of the crisis, elements of the right have sought to bolster the president’s political standing and justify reopening the economy by questioning the death toll. Climate-change skeptics have employed techniques perfected in the fight over global warming to raise doubts about the deadliness of the virus. Others, including Mr. Trump’s media allies as well as some in the anti-vaccine movement, have repurposed fringe theories about “deep state” bureaucrats undermining the president to argue that the official numbers should not be trusted.

They have a found a receptive audience, and a booster of their ideas, in Mr. Trump himself. For the president, the death toll has become a pivotal political indicator, as important to his re-election prospects as his approval ratings and his standing against former Vice President Joseph R. Biden Jr. in swing-state polls.

Late last month, with the number of dead in the United States approaching 75,000, according to figures compiled by The New York Times, projections foresaw another spike in Covid-19 cases and deaths as social-distancing rules relaxed. One draft government report projected as many as 3,000 deaths a day by the end of May. Yet according to administration officials, Mr. Trump has begun privately questioning the models and the official death statistics.

His skepticism is shared by others in an administration that has regularly disregarded the advice of scientists. On Tuesday, the White House Council of Economic Advisers released a model that showed deaths dropping to zero by the middle of May. The projection, which the council suggested was to ”inform policymakers,” appeared to ignore the conventions used by epidemiologists and was roundly dismissed by experts. But it did provide a useful counterpoint to those who argue it is too soon to reopen the economy.

At the same time, the president has increasingly picked up on talk from the political fringes of inflated death counts and plots to ensure his defeat in November.

Dr. Deborah Birx, the coronavirus task force coordinator, at a White House briefing on the state of the pandemic.Credit…Erin Schaff/The New York Times

In late April, as the toll approached 60,000, Mr. Trump retweeted a post by a former New York City police official that claimed the number was being inflated by the same people behind the “failed coup attempts” of the Mueller investigation and Mr. Trump’s impeachment.

“Do you really think these lunatics wouldn’t inflate the mortality rates by underreporting the infection rates in an attempt to steal the election?” the post said.

At the forefront of the fight are a number of climate skeptics who have long exploited the imperfections of scientific research — statistical margins of error, the subjective elements of projective modeling — to cast doubt on the conclusive finding that humans have contributed to global warming.

Steven J. Milloy, a fervent denier of that scientific consensus, was early to play down the coronavirus threat. He compared it to the flu, an argument that public health officials say dangerously underestimates how deadly the virus is.

One policy group that has expressed skepticism about climate change, the Heartland Institute, pointed to a widely used projection of 60,000 deaths to attack earlier models predicting up to two million fatalities. The critique, posted on its website on April 17, ignored the fact that the lower estimate took into account social-distancing measures, and that the high estimate and others close to it were presented as worst-case scenarios if no steps were taken to mitigate the virus’s spread. (The 60,000-death projection was rendered null and void 13 days later, when the death toll surpassed that number.)

Few of those who tacked from climate skepticism to Covid-19 denialism have any real expertise in tracking pandemics. But several are funded by industries that have long sought to question the work of scientists, such as big oil companies like Exxon Mobil and tobacco companies like Philip Morris. They are also backed by conservative groups like the Mercer Family Foundation that hold immense sway inside the Trump White House, and are deeply invested in the president’s political future.

Rebekah Mercer and her father, Robert, at a conference in 2017 questioning the science of climate change. The Mercer Family Foundation has been involved in the conversation around Covid-19.Credit…Oliver Contreras/The Washington Post, via Getty Images

The lines of attack against the conclusions of health experts are familiar to those who have studied the climate-change denial movement, which has long relied on what Naomi Oreskes, a science historian at Harvard, called “motivated reasoning.”

For instance, Todd Starnes, a conservative radio host who has likened climate change to “the Tooth Fairy,” fed the virus “truther” movement when he argued that the crisis was overstated because he did not see crowds outside the Brooklyn Hospital Center in New York. It was the pandemic-era equivalent of pointing to a snowstorm as evidence that the planet is not warming. Days later, reporting from inside the hospital found a staff overwhelmed by critical Covid cases.

Doctors treating a patient with Covid-19 at the Brooklyn Hospital Center, which saw a surge in coronavirus patients.Credit…Victor J. Blue for The New York Times

In an interview, James Taylor, who wrote the Heartland critique, drew a direct line between problems he saw in the modeling of Covid-19 deaths and climate science, arguing that in both instances “we don’t have perfect information” with which to make projections. “The coronavirus models’ failure to make accurate predictions to this point should be instructive when we are told to blindly accept certain climate models,” he said.

Mr. Trump, for his part, has at times sought to use the uncertainty to his advantage. Last month, after his most ardent supporters had attacked the worst-case death estimates for weeks as evidence of hysteria, Mr. Trump began calling attention to the two million figure — as a benchmark against which to judge his handling of the crisis.

Then he went further, pointing to 100,000 deaths as the number against which to judge him.

“We will be lower than that number,” Mr. Trump told reporters as the death count kept by Johns Hopkins University approached 38,000. “But I really believe it could have been millions of people had we not done what we did.”

Even under the best circumstances, modeling how a pandemic will play out, like modeling the pace and impact of climate change, is an imperfect science. And there is indeed great uncertainty about what the death toll is now — and what it will be — given limited data about the new coronavirus and the different counting methods jurisdictions are using.

“There’s a real set of challenges around the statistics — let’s be clear,” said Dr. Ezekiel Emanuel of the University of Pennsylvania, who helped design Obamacare.

A testing tent in Brooklyn, one of the regions hit hardest by the virus.Credit…James Estrin/The New York Times

But in his estimation, conservatives questioning official statistics are mostly seeking evidence that the numbers are exaggerated. “They’re not looking at the full range of data, and if anything, there’s an undercount, not an overcount,” he said.

Many of those conservatives have zeroed in on a recommendation by the Centers for Disease Control and Prevention to add Covid-19 as a “presumed” cause of death even if the diagnosis is not confirmed by a test. The recommendation was partly necessitated by the nationwide lag in testing. Public health officials across the country say that even with the additional “presumed” classifications on death certificates, the actual toll is probably much higher.

It was those recommendations that Dr. Jensen, the Minnesota state senator, seized on when he questioned the death toll in a series of social media posts. He also questioned whether hospitals were overreporting cases because Medicare was offering higher payments for treating coronavirus patients.

Yet Dr. Jensen chose to air his concerns in partisan venues that are hardly known for measured and thoughtful debate. After his first television appearance, the host, Mr. Berg, pointedly asked on Twitter, “Why is #MN inflating Covid-19 death numbers?”

Fox News’s prime-time lineup has often been a clarion for doubt about the pandemic’s severity and the credibility of the nation’s leading health experts.

Beyond her segment with Dr. Jensen, Ms. Ingraham gave a platform to a false and misleading claim by Dr. Phil McGraw, the television therapist, that Covid-19 posed less of a public health threat than swimming pools. While calling for reopening the economy, she has seized on discrepancies in projections to argue that social-distancing measures have gone too far.

Others on Fox, like Brit Hume, have pointed to New York as evidence that numbers were being inflated, citing the city’s decision to add presumed cases to its count.

While Mr. Trump has proved receptive to such arguments, they appear to be having less of an impact on public opinion. The vast majority of Americans — Republicans and Democrats alike — are following social-distancing guidelines, and recent polls have found broad support for restrictions on businesses imposed by state governments.

To Dr. Mann, the seeming inability of Covid skeptics to sow doubts among the public is cause for optimism. “This is sort of a test case for combating denialism and exposing the danger of denialism,” he said.

Dr. Jensen, though, has stayed true to his skepticism in his own life. Last week, he plugged into a remote State Senate hearing on easing restrictions on telemedicine for addiction disorders while playing a round of golf, without a mask.

Dr. Jensen called in to a hearing last month from a golf course where he was not wearing a face mask.

“I just want to ask the senator — how’s he hitting them out there?” a Democratic senator, Jeff Hayden, broke in to ask him.