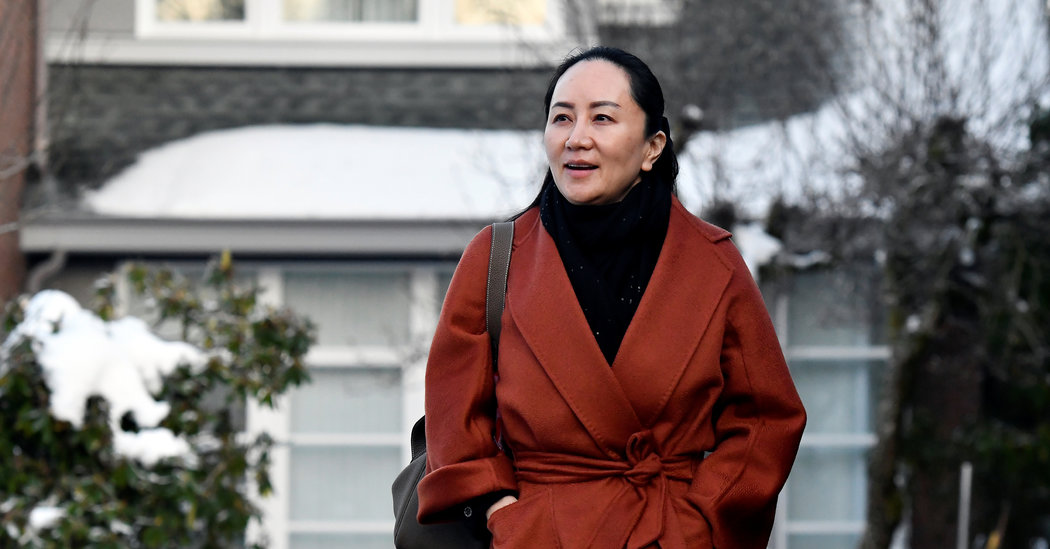 VANCOUVER — Global politics, big money, high technology and the intricacies of Canadian law will come together on Monday when the extradition hearing of Meng Wanzhou, the chief financial officer of the Chinese telecommunications giant Huawei, begins in a Vancouver courtroom.

Ms. Meng, 47, a former secretary at Huawei who rose to become a public face of the company, was arrested in Vancouver in December 2018, after the United States requested her extradition on fraud charges. She has been detained in the city since then.

The arrest has put Canada in a difficult spot between two world powers — China and the United States — and severely damaged the country’s relations with China. Huawei is one of China’s most prominent companies.

Shortly after Ms. Meng’s arrest, China detained — in retaliation, some say — two Canadians and accused them of espionage. It has also punished Canada by restricting imports of pork, canola oil and other Canadian products. Complicating matters, Canada is in the process of deciding whether to allow Huawei to participate in the development of its next-generation 5G network.

The issue is fraught because the United States government has repeatedly accused Huawei of spying and stealing technology from its Western rivals. The Trump administration has argued that the company is in thrall to the Chinese government and a threat to national security. Huawei vehemently denies that.

As the legal case unfolds at the imposing Supreme Court of British Columbia in Vancouver, here’s the background and what’s at stake.

Who is Meng Wanzhou?

She was born in the western city of Chengdu, has a master’s degree in accounting and began her career at Huawei 25 years ago. Before her arrest, her responsibilities at the company, where she is also deputy chairwoman of the board, included announcing its financial results.

Ms. Meng, who is also known as Cathy or Sabrina, is married; she has four children.

Since her arrest, Ms. Meng’s life has been circumscribed. She has been out on bail of 10 million Canadian dollars and relatively free to travel about Vancouver, where she and her husband own two expensive homes. She is under 24-hour surveillance and must wear a GPS tracker on her ankle.

She is now living in a gated seven-bedroom mansion, valued at about $14 million Canadian dollars, in the city’s exclusive Shaughnessy neighborhood. The judge in the case allowed her to move there from her other home: an estimated $6 million, six-bedroom house in another wealthy neighborhood.

Under the terms of her bail, she is allowed to leave her house until an 11 p.m. curfew, including traveling to Richmond, a nearby city with a diverse Chinese community, food courts with regional Chinese delicacies and a vibrant cultural life.

Friends and work colleagues can visit her. Her family came to Canada during the Christmas holiday period, according to a member of her security detail.

Since being detained, Ms. Meng recently wrote, in a letter published on Huawei’s website, she has experienced “moments of fear,” but also found more time for herself. She passes the time by, among other things, reading and oil painting.

Ms. Meng’s bail conditions have spurred anger in Canada because critics have contrasted her surroundings with the harsh conditions of the Canadians arrested by China, who are denied access to lawyers and their families.

What is happening in court this week?

In January 2019, the United States unveiled a sweeping indictment that, among other things, charges that Ms. Meng fraudulently deceived four banks into clearing transactions in Iran through a subsidiary company, in violation of sanctions against Iran.

Over several days, Associate Chief Justice Heather Holmes will examine whether the case against Ms. Meng satisfies a fundamental requirement for extraditing a person under Canadian law: that the crime she is accused of in the United States constitutes a crime in Canada. This is known as the legal concept of “double criminality.”

Prosecutors in Canada are focusing on the accusation that Ms. Meng lied to representatives of the bank HSBC in 2013 about Huawei’s relationship with Skycom, a company doing business in Iran. Prosecutors contend she told HSBC that Skycom was a partner although it was, in fact, a Huawei subsidiary, putting HSBC at risk of sanctions.

“Inducing a bank to extend financial services by lying to it is criminal,” the prosecution wrote in documents submitted to the court.

Ms. Meng has denied the allegations. Her defense argues that the crime she is being accused of does not constitute a crime in Canada because Canada has not imposed sanctions against companies doing business in Iran. They also contend that there was no risk of financial loss for HSBC, a prerequisite for fraud to have taken place, under Canadian law.

“In essence, this is a case of U.S. sanction enforcement masquerading as Canadian fraud,” Ms. Meng’s lawyers argued in documents released Friday.

If the judge rules that the case doesn’t satisfy the double criminality requirement, then Ms. Meng could go free.

Later this year, the court will address another argument Ms. Meng’s legal team is making: that her rights were violated when she was first detained.

Canadian border officials questioned her for three hours — and seized her phones, asked for her passcodes and searched her luggage — before arresting her. Her lawyers contend that this means that Canada and the United States conducted a “covert criminal investigation.”

If the judge finds that Ms. Meng’s rights were violated, the case could be dismissed.

The defense has filed a separate civil case against the Canadian authorities over the manner of Ms. Meng’s arrest, and the date for that hearing has yet to be announced.

And Richard Kurland, a leading immigration lawyer, said the case was significant because it could help define when people’s constitutional rights kick in after they arrive in the country.

What are the chances Ms. Meng will be extradited?

Very high. Changes to Canada’s extradition laws in 1999 — which are still widely criticized by human rights groups — mean that about 90 percent of extradition requests are granted.

Legal experts say an extradition request can be turned down if it is deemed to be politically motivated or if a person extradited could face the death penalty.

Shortly after Ms. Meng’s arrest, President Trump said he might consider interceding in the case if that helped him reach a trade deal with China. Her lawyers have argued that these statements were “intimidating and corrosive of the rule of law” and should disqualify the United States from being able to extradite Ms. Meng.

If Ms. Meng loses the extradition case, she could appeal the decision all the way to the Supreme Court of Canada in a process that could drag on for years.

Eventually the case would move from the legal arena to the political one. A final judicial ruling against Ms. Meng would go to the justice minister in Prime Minister Justin Trudeau’s government, who would then decide whether to issue the order to send Ms. Meng to the United States.