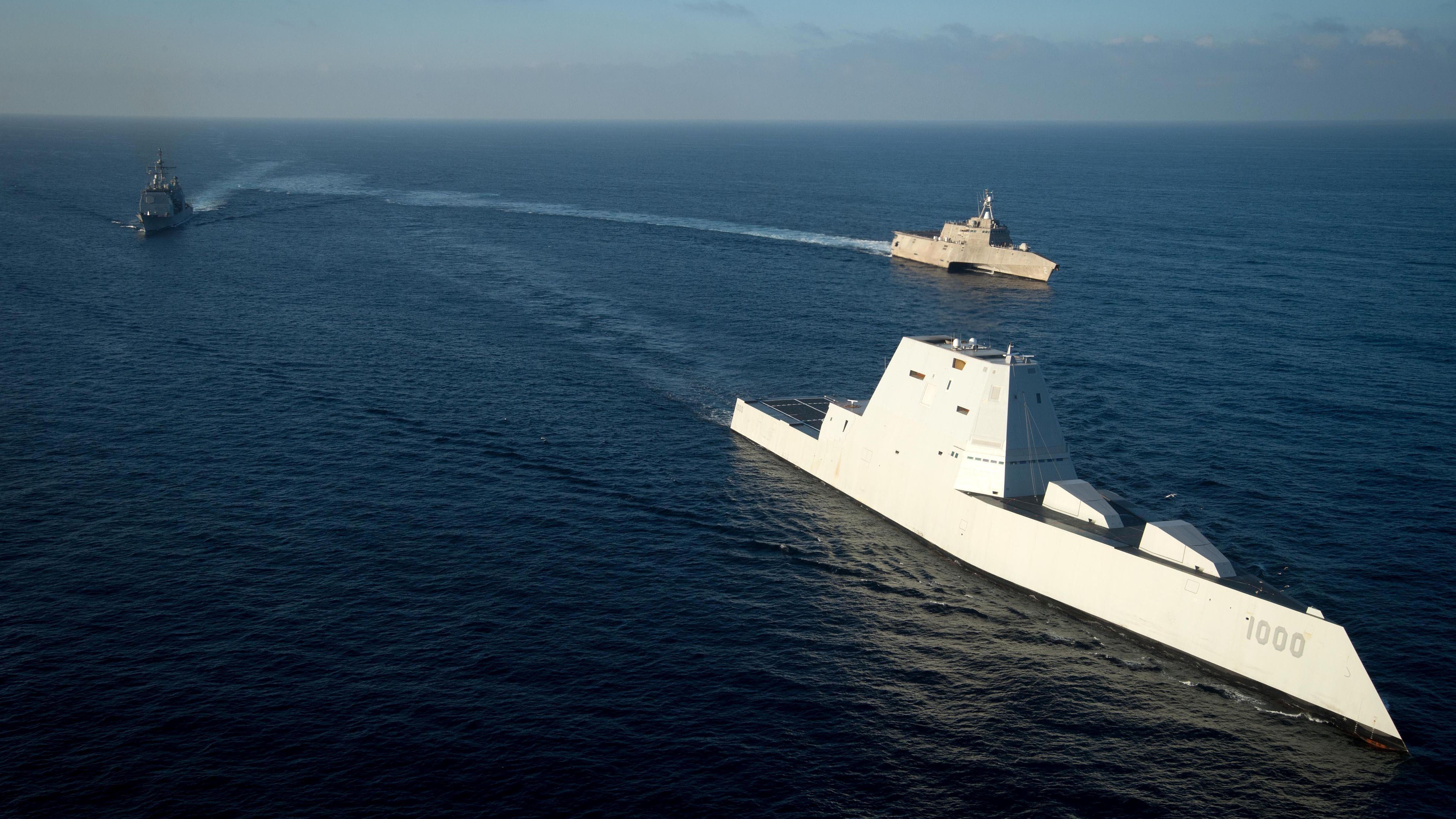 The Navy’s most technologically-advanced surface ship, USS ‘Zumwalt’, steams in formation with USS … [+] ‘Independence’ and USS ‘Bunker Hill’ on the final leg of her three-month journey to her new homeport in San Diego in 2016.

The U.S. Navy spent $22 billion developing a new destroyer and all it got was three ships.

The Zumwalt class is an oddity in a fleet dominated by variants of the 10,000-ton-displacement Arleigh Burke-class destroyer. Now that all three Zumwalts are complete and the 16,000-ton vessels are beginning to gather at the Navy’s base in San Diego, it’s time to figure out what to do with them.

One analyst proposed an idea. “Concentrate the Zumwalts,” Ryan Belscamper, a former sailor who is now a Navy acquisitions official, wrote in an op-ed for Proceedings, the professional journal of the U.S. Naval Institute.

Operating together, the Zumwalts could launch devastating missile barrages against enemy fleets. But grouping the destroyers also could leave them vulnerable to air-attack. The Zumwalts are impressive vessels, but they’re not very good air-defenders.

The Navy has built its deployment system around aircraft carrier battle groups and amphibious ready groups. A carrier or a three-ship group of amphibs deploys for around eight months every three years, spending the rest of its time in maintenance and training.

Folding the Zumwalts into this system would result in one of the destroyers deploying while the other two are in the yard or busy with exercises.

That would be a mistake, Belscamper wrote. “Traditional readiness models of train, deploy, overhaul, repeat would be a catastrophic waste of the Zumwalt-class destroyers and crippling in the face of peer conflict. With a mere three ships in the class, only one Zumwalt likely would ever be available in a time of crisis.”

Belscamper proposed a unique model for the unique Zumwalts, which with their stealthy, downward-sloping hulls, powerful electric generators and huge size are unlike other Navy surface vessels.

The Navy should deploy all three Zumwalts together as a cruiser squadron, Belscamper recommended. In so doing, the Navy would return to a centuries-old model of naval operations, where independent and self-sufficient warships—cruisers—would sail together on long-distance voyages.

Since the squadron would need time for refit and training, it wouldn’t be able to maintain an overseas presence during peacetime. The Navy would keep it in reserve, ready to surge forward during a time of crisis.

The Zumwalt squadron should focus on hunting down and sinking enemy warships, Belscamper wrote. That’s an assessment the Navy agreed with when, in 2018, it officially shifted the class’s mission from land-attack to surface-warfare. Belscamper recommended that each vessel fill half of its 80 vertical missile cells with anti-ship missiles.

The Zumwalts are compatible with the Tomahawk and SM-6 long-range anti-ship missiles that already are in the fleet or about to enter service. The Navy also is developing the new, stealthy Long-Range Anti-Ship Missile that should fit in the Zumwalts’ launchers.

To further bolster the Zumwalts’ ship-killing potential, Belscamper advised the Navy to resume development of a guided shell for the destroyers’ twin 155-millimeter guns. The Navy two years ago suspended development of ammunition for the special guns after the per-shell cost rose to nearly $1 million.

With their guns operational and each packing 40 anti-ship missiles capable of striking targets hundreds of miles away, a three-ship Zumwalt squadron would be a powerful force. It could, in theory, sink the entire fleets of many countries, Belscamper pointed out.

The guided-missile destroyer USS ‘Zumwalt’ departs San Diego as part of an operational underway on … [+] March 8, 2019.

But Belscamper in his essay ignored the theoretical squadron’s major weakness. To save money, the Navy late in the Zumwalt’s development removed its S-band radar, leaving the type with a single main radar operating in the X-band.

Many warships—including the Navy’s 70 or so Burkes—have both kinds of radar, and for good reason. The S-band is for searching a wide expanse of sky. The X-band zeroes in on specific targets in order to guide missiles during an attack.

Lacking a dedicated volume-search radar, a Zumwalt must use its X-band radar in an area-search mode—a compromise solution to the air-defense problem which, even when it works, limits how quickly and at what range the class can engage an incoming aircraft or missile with its own Evolved Sea Sparrow and SM-2 surface-to-air missiles.

And to be clear, the Zumwalt’s method of air-defense doesn’t yet work. “The Navy has discovered severe problems … that will adversely affect the operational effectiveness of the combat system if not corrected,” the sailing branch reported in 2019 after testing the Zumwalt’s radar and computers. The Navy last year paused air-defense testing for the class as it works to remedy the unspecified flaw.

In short, the Zumwalt can defend itself against air-attack, but not nearly as well as a Burke can do. The Zumwalts sailing together would make for a powerful anti-ship unit. A fleet-killer. But they might need a little help. They might need a Burke to sail with them to protect them from aerial threats.