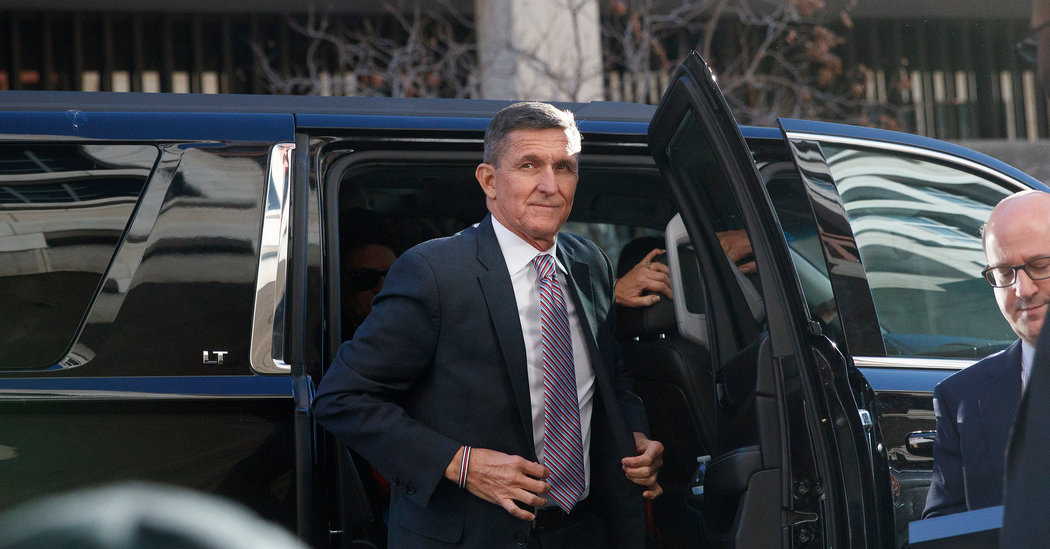 It will be up to a federal judge to decide if the notes and emails advance claims that Mr. Flynn was framed when he lied to the F.B.I. in January 2017 about his conversations with a Russian diplomat, a felony he twice pleaded guilty to.

The documents show details of a debate among F.B.I. officials before they interviewed Mr. Flynn at the White House and about how to address legal, investigative and political issues, as well as other inner workings of a high-level law enforcement inquiry.

The materials were released Wednesday as part of a Justice Department review of the Flynn case. They were turned over under seal last week to his lawyers, who have repeatedly accused prosecutors of withholding evidence, claims a judge has previously rejected.

The judge, Emmet G. Sullivan of the United States District Court for the District of Columbia, who is overseeing Mr. Flynn’s case, has asked defense lawyers and prosecutors for more information about the documents.

Mr. Flynn pleaded guilty a second time, in December 2018, to lying to the F.B.I. about his conversations with Sergey I. Kislyak, the Russian ambassador to the United States at the time, as the Obama administration was about to place sanctions on Russia for its election sabotage.

The newly disclosed notes appear to be written by Bill Priestap, the former head of the F.B.I.’s counterintelligence division, whose initials are on them. Mr. Priestap played a central role in the F.B.I.’s Russia investigation. He approved the opening of the case, known as Crossfire Hurricane, in July 2016 to determine whether any Trump campaign officials, including Mr. Flynn, had conspired with Russia during the presidential election.

The notes were taken on Jan. 24, 2017, only days after Mr. Flynn lied to Vice President Mike Pence and other White House officials about his discussions with Mr. Kislyak. The notes show that F.B.I. officials were debating how to deal with Mr. Flynn and figure out the goals of the interview.

In one instance, Mr. Priestap writes: “What’s our goal? Truth/admission or to get him to lie, so we can prosecute him or get him fired?” In another, Mr. Priestap appears to understand the risks of the interview, adding, “Protect our institution by not playing games” and “If we’re seen playing games, WH will be furious.”

Among the documents handed over to Mr. Flynn’s lawyers was an email talking about whether agents needed to warn the national security adviser that lying to the F.B.I. was a crime. Another email described the questions that agents should be prepared to answer if Mr. Flynn asked them.

Mr. Priestap did not immediately respond to an email requesting comment.

Mr. Flynn’s lawyers told Judge Sullivan last week after receiving the materials that there was little doubt what they proved: that Mr. Flynn had been deliberately set up by corrupt F.B.I. officials.

“Since August 2016 at the latest, partisan F.B.I. and D.O.J. leaders conspired to destroy Mr. Flynn,” the lawyers wrote to the judge. “These documents show in their own handwriting and emails that they intended either to create an offense they could prosecute or at least get him fired.”

Mr. Flynn’s lawyer Sidney Powell said the judge should dismiss the case because of the government’s “shocking” and “reprehensible” conduct.

In a ruling last year, Judge Sullivan dismissed accusations that Mr. Flynn had been ambushed to try to trap him into making false statements to the F.B.I. “The record proves otherwise,” the judge wrote.

The newly released documents also seem to indicate that the F.B.I. softened its interview strategy with Mr. Flynn, suggesting that agents had decided to give the national security adviser more opportunities to tell the truth. Mr. Priestap said agents “can quote” from what seems to be a redacted reference to classified transcripts of the Russian diplomat’s conversation with Mr. Flynn. Prosecutors have said in court documents that agents afforded Mr. Flynn “multiple opportunities to correct his false statements by revisiting key questions.”

James B. Comey, the F.B.I. director at the time, gave the go-ahead for agents to interview Mr. Flynn, taking advantage of the chaos in the early days of the Trump administration by deciding not to coordinate with the White House counsel. His decision to send agents to the White House also angered top Justice Department officials who expected to be consulted before the F.B.I. made such a move.

Mr. Comey’s deputy, Andrew G. McCabe, told Mr. Flynn on Jan. 24 that a pair of agents needed to speak with him. Mr. Flynn asked if it was about his conversations with Mr. Kislyak. Mr. McCabe said yes, according to court documents made public in the case.

Mr. Trump has accused Mr. Comey and Mr. McCabe of being a part of a plot to destroy his presidency. Mr. Priestap’s role in the Russia investigation has received less attention.

Mr. Flynn’s former legal team at Covington & Burling also said in a court filing this month that it had discovered more emails and handwritten notes that it had failed to share with his current legal team. Covington represented Mr. Flynn when he pleaded guilty to lying to the F.B.I.

After Covington said that it had found the additional documents, Judge Sullivan ordered it to “re-execute a search of every document and communication pertaining to the firm’s representation of Mr. Flynn.”

A spokesman for Covington & Burling did not respond to a request for comment.

Ms. Powell has seized on the documents recently produced by Covington and on the Justice Department’s notes to claim that Mr. Flynn was coerced into lying and then pushed to plead guilty.

Mr. Flynn’s case has been handled by federal prosecutors in Washington. But after that office came under scrutiny by Mr. Trump’s allies, Attorney General William P. Barr asked Jeffrey B. Jensen, the United States attorney for the Eastern District of Missouri, to review the Flynn case for any improprieties.

The newly unsealed documents are the result of Mr. Jensen’s work, according to the Justice Department. A second tranche of documents was shared with Mr. Flynn’s legal team on Wednesday.