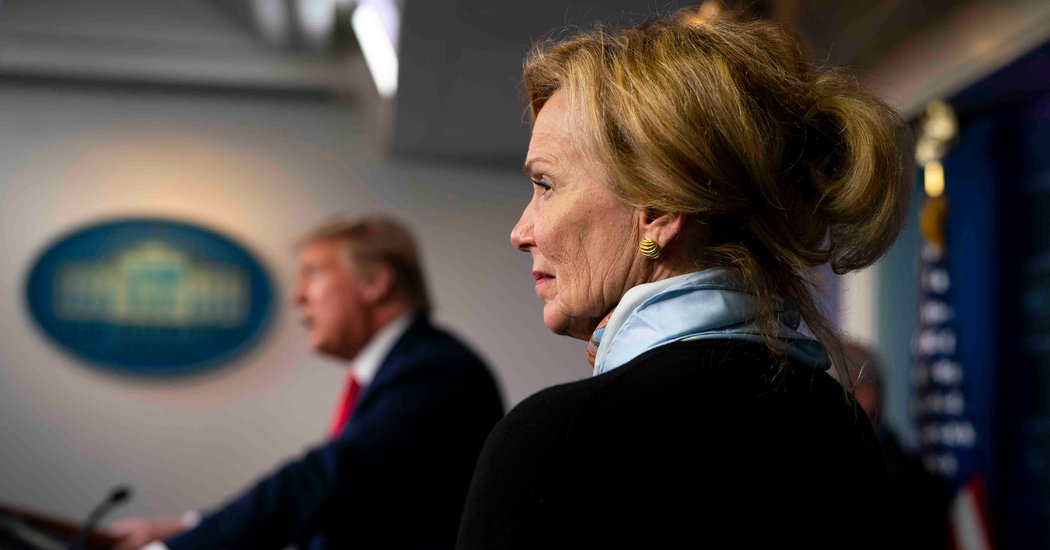 But this week, Dr. Birx’s comments casting doubt on talk of ventilator and hospital-bed shortages, and praising Mr. Trump’s attention to detail in lavish terms, have raised questions about her independence as the number of coronavirus infections in the United States has soared past 100,000.

Practically overnight, Dr. Birx has become a partisan Rorschach test. Conservative commentators have praised her as a truth-teller, pushing back on coronavirus hysteria. Critics of Mr. Trump accused her of squandering the credibility she had developed as a health official in Democratic and Republican administrations.

Dr. Birx’s comments, especially those dismissing ventilator shortages, startled some health experts. While most hospitals might have sufficient supplies at the moment, many worry about a crush of patients in the very near future.

Dr. Howard Bauchner, the editor in chief of The Journal of the American Medical Association, warned Friday of “a potential tsunami coming” on a video call with hundreds of other physicians about rationing ventilators and critical care.

Dr. Ryan A. Stanton, a board member at the American College of Emergency Physicians, said Dr. Birx sounded like “the builders of the Titanic saying the ship can’t sink.”

Public health officials have emphasized that regions of the country less urgently in need of more ventilators could donate some of their inventory to health systems in more desperate need, a point that Dr. Birx made Thursday night.

Mr. Trump on Friday, appearing to respond to widespread criticism from various cities and states, announced that the federal government would issue contracts to buy thousands of ventilators from a variety of large and small makers. But it appeared doubtful the devices could be produced in time to help the overwhelmed hospitals.

Dr. Birx has had to oscillate between occasionally competing forces on the task force, which features a set of doctors and scientists who have often registered skepticism with the White House’s attitude toward coronavirus policy. In private discussions, she has joined with members of the group whom she has known for decades to push the State Department to issue an advisory against traveling on cruises.

This week, she met with Drs. Fauci, Stephen M. Hahn, the commissioner of the Food and Drug Administration, and Robert R. Redfield, the director of the Centers for Disease Control and Prevention, where the group talked through concerns about the Trump administration’s embrace of malaria drugs as possible treatments for Covid-19, the disease caused by the coronavirus, according to a senior administration official.

Publicly, Dr. Birx has been a soothing constant next to Mr. Trump and Vice President Mike Pence in coronavirus meetings and briefings, where she has been one of the few regulars in a rotating cast of health officials perched behind the White House lectern. Mr. Pence, who is overseeing the government’s response, introduced her at the time of her appointment as his “right arm.”

But on Thursday, that delicate balance appeared to tip. After talking to New York officials, Dr. Birx said she had been told that there were still intensive care beds and “over 1,000 or 2,000” ventilators still available. She also dismissed news stories of hospitals drafting blanket do-not-resuscitate orders for critically ill Covid-19 patients.

Just a few feet away stood Dr. Fauci, a longtime friend and mentor of Dr. Birx’s, who had his own message: hunker down. He said that the coronavirus could become cyclical. He cautioned that a vaccine was still many months away. And he said that therapeutic treatments, which Mr. Trump has eagerly pushed as a “game changer,” were still unproven.

“The best way to get the best drug as quickly as possible is to do a randomized controlled trial so that you know is it safe and is it effective,” he said. “If it’s not effective, get it off the board and go to the next thing.”

The realities on the ground appear to favor the tone of Dr. Fauci’s warnings. Dr. Mahshid Abir, an emergency physician at the University of Michigan and an expert on hospital preparedness, said on Friday that shortages are inevitable. Hospital systems not only in New York but Atlanta, Seattle and New Orleans are already warning that they have or will reach capacity in the coming days.

“No matter what assumption you use, even on the lower end, the ventilator capacity is just not going to be there,” she said.

The United States currently has 160,000 to 200,000 ventilators, but as many as one million patients might need to use one of the machines during the outbreak, according to the Society of Critical Care Medicine.

Dr. Birx, who has built a well of bipartisan admiration in her years as a health official, has more recently accommodated herself to the political winds with the kind of presidential flattery that Mr. Trump demands from aides.

“He has been so attentive to the details and the data, and his ability to analyze and integrate data has been a real benefit during these discussions about medical issues,” she gushed in an interview with the Christian Broadcasting Network on Wednesday.

To some extent, public health professionals have expressed sympathy for her position.

“Harnessing political will to implement recommendations from the country’s top respiratory disease public health experts and organizing the government to manage the response effectively is hard,” said Dr. Thomas R. Frieden, who worked with Dr. Birx when he ran the Centers for Disease Control and Prevention and she oversaw its division on global AIDS. “Many lives depend on getting that balance right.”

A colonel in the Army, she began her career in the early 1980s as an immunologist at the Walter Reed Army Medical Center, and spent part of her training as a fellow in Dr. Fauci’s lab. In 2014, President Barack Obama put her in charge of addressing the global AIDS epidemic. She also created a program called DREAMS, a public-private partnership to reduce rates of H.I.V. among adolescent girls and young women.

In her current role, Dr. Birx’s appeals have extended to some of Mr. Trump’s favorite conservative media personalities. She appeared alongside Mr. Pence in a private White House meeting earlier this month to update figures as divisive and confrontational as Dan Bongino and Eric Bolling.

And she has introduced herself to new crowds, giving advice on self-quarantining this week on “The Morning Toast,” a talk show on YouTube that is popular with a young audience.

Mr. Trump and several White House officials view Dr. Fauci with some level of skepticism, believing he tends too much to his own public persona and has gone “rogue” on messaging. Dr. Birx, they think, is more willing to be patient with the president’s interruptions and theorizing about medicine.

Among Mr. Trump’s frustrations with Dr. Fauci has been his unwillingness to embrace the malaria drugs that Mr. Trump has celebrated, chloroquine and hydroxychloroquine. Dr. Fauci has been much more vocal about their risks, and dismissed potential evidence of their success in treating the coronavirus as anecdotal.