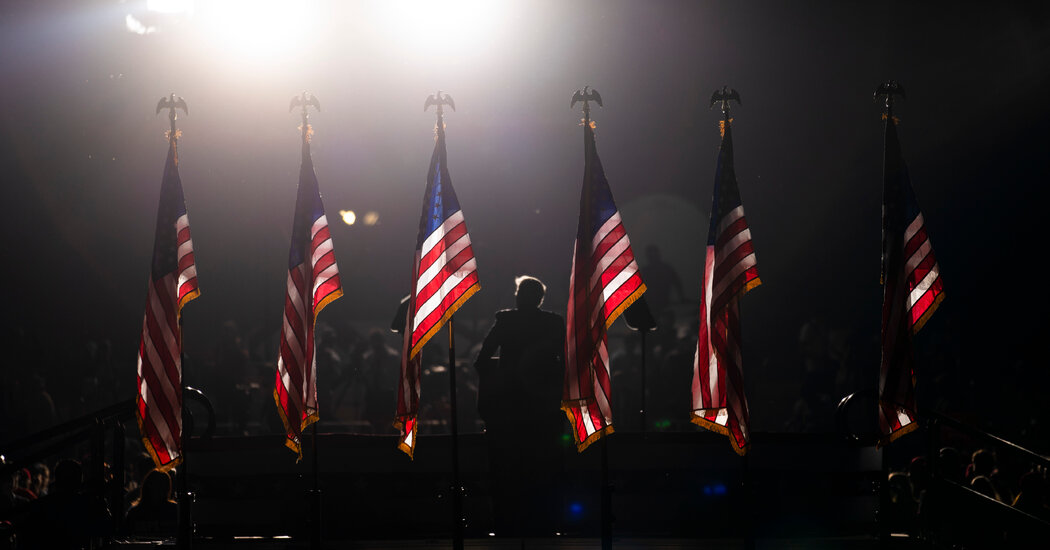 WASHINGTON — President Trump argued this week that the death toll from the coronavirus was actually not so bad. All you had to do was not count states that voted for Democrats.

“If you take the blue states out,” he said, “we’re at a level that I don’t think anybody in the world would be at. We’re really at a very low level.”

The statement was as jarring as it was revealing, indicative of a leader who has long seemed to view himself more as the president of Red America rather than the United States of America. On the pandemic, immigration, crime, street violence and other issues, Mr. Trump regularly divides the country into the parts that support him and the parts that do not, rewarding the former and reproving the latter.

While presidents running for re-election typically look at the map of the country through a partisan lens, they ostensibly take off such a filter when it comes to their duties to govern, or at least make the effort to look like they do. But that is an axiom Mr. Trump has rarely observed as he rails against “Democrat cities” and “badly run blue states.” And he has sought to punish them with tax policies and threats to withhold federal funding, while devoting far more time and attention to red states.

“President Trump views and uses politics as a popularity contest, rewarding those he considers personally loyal to him,” said David Lapan, a former senior official in Mr. Trump’s Department of Homeland Security who is now at the Bipartisan Policy Center. “This isn’t high school, and lives are at stake, often with tragic results.”

The contrast with his predecessors in moments of national crisis could hardly be more stark. After the terrorist attacks of Sept. 11, 2001, President George W. Bush invited the Democratic senators from New York, Hillary Clinton and Chuck Schumer, to the Oval Office to collaborate on how to help the victims and repair the damage.

When Hurricane Sandy slammed into New Jersey just days before the 2012 election, President Barack Obama broke off from campaigning to travel to the ravaged state where he stood side by side with Gov. Chris Christie, a Republican who was supporting his opponent, to pledge solidarity in recovery efforts.

But these are more partisan times, and Mr. Trump is a more overtly partisan figure than perhaps any modern president. Through months of the pandemic, he has at various moments lashed out at Democratic governors, blaming them for any failures. His comment on Wednesday about not counting deaths in blue states reflected an effort to lay responsibility for the worst pandemic in a century on his opposition, and he repeated it at a campaign rally on Thursday night in Wisconsin.

“It’s so unworthy of a president,” Tom Ridge, a Republican former governor of Pennsylvania and later secretary of homeland security under Mr. Bush, said on Thursday. “It’s beyond despicable. It’s soulless.” He added that the virus was an equal-opportunity killer. “It’s almost unspeakable in the middle of the pandemic to try to divide the country on a political basis when Covid-19 is really bipartisan.”

Mr. Schumer, now the Senate Democratic leader, went to the floor to denounce Mr. Trump. “What kind of president looks at the number of dead citizens in the country he is supposed to lead — and in attempt to glamorize himself — dismisses every American who died in a state that didn’t support him politically?” Mr. Schumer said. “What a disgrace. It’s monstrous. Not a shred of empathy. Not an ounce of sorrow. What kind of president do we have?”

In a statement on Thursday, Sarah Matthews, a White House spokeswoman, said Mr. Trump’s policies “uplift all Americans” and that he fights “for people of all backgrounds,” including in fighting the coronavirus. “But it’s no secret some Democrat-run states and cities have failed to create economic growth, secure their streets or protect the most vulnerable against this virus,” she said.

Some of the president’s supporters suggested the criticism of his comments has been overwrought and perhaps hypocritical. Ari Fleischer, who was White House press secretary for Mr. Bush, said Mr. Schumer, Speaker Nancy Pelosi and other Democrats “blame everything they don’t like on Trump,” whether he deserves it or not.

“I do think Trump is on high ground when he points out that cities with Democratic mayors are not doing a good job handling the riots,” Mr. Fleischer said. “Frankly, I view urban issues, not just the riots but quality of life issues that are important, as openings for Republicans to make their case in areas where one-party rule has been the norm for decades.”

Mr. Trump came to office making the same sorts of promises of bipartisanship that other presidents have. “I pledge to every citizen of our land that I will be president for all Americans,” he declared in his victory speech after being elected in 2016. “And this is so important to me.”

But once in office, he relished warring with Democratic governors and mayors. He attacked blue states for “sanctuary” policies resisting cooperation with federal immigration crackdowns, and he has sought to penalize states like deep-blue California for environmental policies that go beyond the standards he has set at the federal level. More recently, he threatened to take funds from four “anarchist jurisdictions” with Democratic mayors who in his view have not done enough to suppress protests against racial injustice that turn violent.

Mr. Trump set the tone early with the signature tax cut legislation that passed in 2017 and limited the federal deduction for state taxes, effectively raising taxes on many high-income earners in blue states and creating what Gov. Andrew M. Cuomo of New York at the time called “an economic civil war” between blue states and red states. Mr. Trump subsequently changed his own residence from blue New York, where the tax change hit hard, to the redder Florida, where there is no state income tax. He has urged others to leave New York as well.

“Trump has never seen himself as president of the United States,” said Stuart Stevens, a top strategist to Mitt Romney when he was the Republican presidential candidate in 2012 and now an outspoken critic of Mr. Trump. “He’s a gang leader, and you are either in his gang or you are the enemy.”

The president’s travels reflect his priorities. Not counting Maryland, where Air Force One is based, or states where he has properties (New York, New Jersey, Florida and Virginia), Mr. Trump has spent about four times as many days visiting states that supported him in 2016 as he has in those that voted against him, according to data compiled by Factba.se, a service that tracks the president’s statements and actions.

It did not go unnoticed that Mr. Trump remained all but silent for weeks about the wildfires that have been ravaging California, Oregon and Washington, all states that voted against him and almost certainly will again. When he finally did make a one hour and 50 minute visit to California on Monday to be briefed on the natural disaster, he was asked if he cared about blue states.

“Let me just tell you about your nasty question,” he snapped. “I got a call from the governor immediately, and I called him immediately. In fact, he returned my call. And on that call, I declared it a national — an emergency. I gave an emergency declaration. That was immediate. So don’t tell me about not doing, because I gave immediate.”

Indeed, Gov. Gavin Newsom, a Democrat, later during that visit praised the president for his assistance before carefully raising their disagreement on climate change. “I want to thank you and acknowledge the work you have done to be immediate in your response,” Mr. Newsom told him.

But by the next day, Mr. Trump was again bashing “Democrat-run states,” repeating his opposition to a coronavirus relief package that would provide financial aid to states afflicted by the virus.

“Why do you keep talking about Democrat states?” George Stephanopoulos asked him during a town hall-style meeting in Philadelphia hosted by ABC News. “They’re American states.”

“No,” Mr. Trump replied. “The Democrat-run states are the ones that are doing badly, George.”

To the extent that is true, it may be at least partly because of the president’s other observation, that Democratic states were also hit harder by the virus.

States that voted against Mr. Trump in 2016 have seen 103,918 deaths, according to the latest New York Times tally on Thursday afternoon, compared with 91,525 in states that supported him. If measured by which party controls the governorship, then the death count is even worse in blue states, with 116,782 deaths to 78,661 in red states. Measured against population, those blue states have about 25 percent more deaths than red ones.

But that hardly defines cause and effect; the virus arrived from overseas first in blue states, which had dense cities where it spread readily. Even making such a calculation struck public health officials as crassly inappropriate. Dr. Margaret A. Hamburg, who served as commissioner of the Food and Drug Administration under Mr. Obama, recalled working as health commissioner for both Republican and Democratic mayors of New York City and never feeling that public health was made a partisan issue. She found Mr. Trump’s comment “startling” with no benign explanation.

“Either he was saying that he doesn’t care about the lives of people who likely would not vote for him, or he cares more about appearances than the realities of a devastating disease that is killing people,” she said. “If there ever was a circumstance that should have unified us as a country, working together across political and other divides, it should have been a communicable disease threat such as Covid-19.”