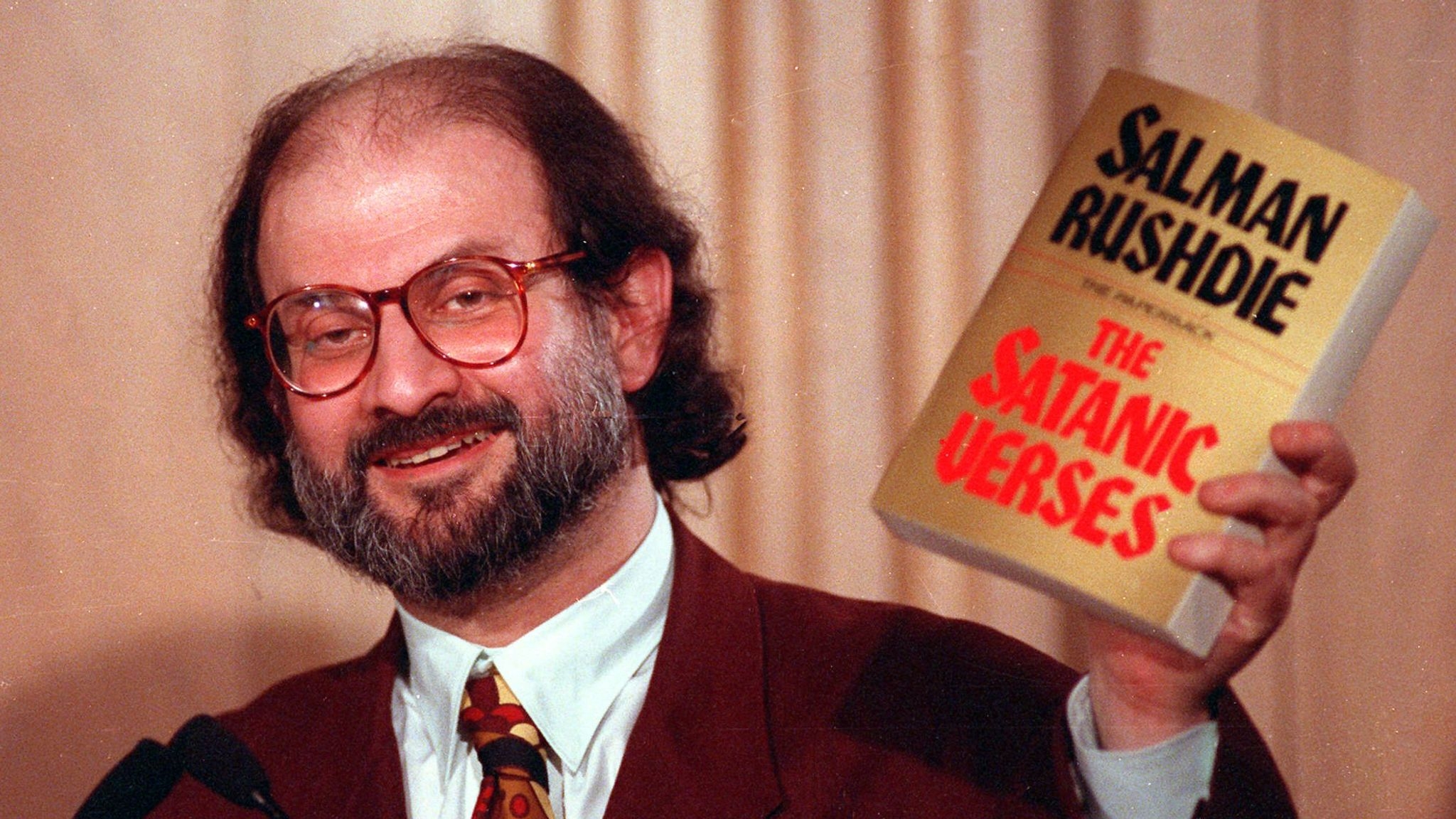 Shalom friends, enemies, and frenemies and welcome back to another edition of Laura’s Links. We’re back from the pool, and my son particularly enjoyed himself due to the rousing, cheesy teen bop-pop music that the delightful, friendly teenage lifeguards put on in the background. And as I get ready to hit “send” to my editor at Steyn HQ, I’m even sitting with my feet up for a few moments, nursing a fruity, berry milkshake creation made by Mr. C. The milkshake is certainly a lot sweeter than the bitter, horrendous big story of the past week – the attempted assassination of Sir Salman Rushdie by an excitable fatwa fanboy on stage in New York.

The prognosis for Sir Salman at first seemed very dire indeed, but appears to be somewhat better now. Unfortunately, the prognosis for our civilization regarding the issue at hand, freedom, looks terminal. At this point in time, I do not see any reason for any optimism whatsoever about either the current state of free speech in the Western world or for our chances of reviving that freedom in our future. Too much territory has been ceded. I believe that too many allegedly free peoples have gotten used to living in fear and self-censorship. Shuffling along with one’s head down, “don’t use my name” has become the default, tragically comfortable, anesthetized and sanitized “new normal” for far too many allegedly free peoples.

James Delingpole had some good thoughts about some measures that can be taken to mitigate the damage of this age. I certainly agree with his thoughts about using cash. It’s clear that the digitization of our economies is truly a CCP wet dream for our “Western” WEF brainwashed leaders. One of the West’s leading anti-woke warriors, Florida governor Ron DeSantis, also continuously fights the wokestapo and has had many successes. Take for example the tremendous plan to train American veterans to become teachers. It’s quite brilliant and will insert intelligent, America-loving patriots right into the belly of the beast; the public education system. Delingpole’s suggestions and DeSantis’ plan are all good things, they will have a local impact – that’s great, but overall, we are still in a predominantly defensive position. I really don’t think we can turn this clock back on a societal scale.

Does that mean we still should not try? Of course not. We still need to fight and still need to muster our courage and we should still stand with the brave. For more thoughts on living in truth, I would point you toward this excellent essay by Rod Dreher at The American Conservative:

“In Live Not By Lies, Czech dissident Kamila Bendova, a strict Catholic, explained to me why she and her late husband had no problem at all being close friends and allies with the free-love hippies of the anti-communist dissident movement. She said that when you are in a totalitarian situation, the rarest quality to find is courage. The hippies had it; most Christians, she said, did not; they conformed like everybody else. Kamila said she and her husband knew that they had to stand with the few and the brave, whatever else those people believed.

“Let this be a lesson to us all. Your pastor and best friends in your church might be too afraid of being thought bigoted to raise their voices against this demonic evil. Better get it clear in your head right now: when the persecutors come for you, these people will keep their heads down and say nothing; the atheist liberals like Peter Boghossian, on the other hand, will have your back.”

The great, courageous Ayaan Hirsi Ali has also stated emphatically that the infidels will not be silenced. What a glorious rallying cry. What an astonishingly courageous woman, who continually takes on so much more than her “share” of the risk. Women like her and Yasmine Mohammed are showing us how courage is done, yet grotesquely, so many free persons willfully look away and shame on them. The masses shuffle on, hoping that by keeping their heads down, by not telling that joke, by attending re-education camp with a perfect record and by nodding along that they won’t be next. The great Douglas Murray is hoping that this event will inspire a robust and forthright condemnation of these assaults on our freedoms, and a rejection of the preposterous self-censorship that we have taken upon ourselves.

When I was younger and more naive, when terrorist and other assorted atrocities took place, I remember saying to myself something along the lines of “this time, the world will wake up”. But “the world” never did, I stopped expecting the wake up to ever happen and I’ve been much better off for it.

A rather new, and spirited acquaintance of mine, a fellow warrior in anti-lockdowns and anti-Covid tyranny activism circles relayed to me that she was talking to a good friend of hers, complaining on matters such as the indifference to people’s suffering over the past two years, the need to bring the perpetrators of these harmful policies to justice and other such matters. She got a heaping dose of tough love from her friend who advised the following: “Stop going to the hardware store to buy milk.”

I told her that my version about wishful thinking was more crude: “If my aunt had balls, she’d be my uncle.” We agreed that I’m stealing hers and she’s stealing mine.

Live in truth, be courageous, raise your children well, turn to G-d for strength, but for the love of heaven, let’s all stop going to the hardware store to buy milk.

This should be fine.

What could possibly be wrong with this?

Biden flops: “How much cash fits on a helicopter?”

Must read: A day with a Biden migrant-broke, abandoned and lost in New York. Tremendous writing.

Canada: a culture of death

Come on along and listen to the Lullaby of Miiiiiigrants.

“Doctor” Jill just has the worst taste ever and frankly, I’m shocked IKEA hasn’t called and asked for their lampshade back.

“Words are not violence. Violence is violence.”

“It could have been so much worse, etc.“

LOL this is great stuff. End the occcupayyyyshun!!!

Persecuting a pro-Israel professor on campus.

“Listen to this, it freaked me out.”

Nothing to see here.

Pure, sadistic, sickening evil and every person who imprisoned these poor souls should be locked away themselves and rot in a small cell for the rest of their lives.

“An Ode to Hate”. This guy is literally channeling Kathy Shaidle and it’s wonderful. Like old home week on the internet.

“Dutch Farmers are Frontline Warriors in this War against Global Tyrants“. This is a very touching clip.

Nothing to worry about here.

“What does the Thailand myocarditis study show us?”

This is so disturbing. Can we call it child abuse yet or nah?

No, you don’t have anything better to do than save your country.

“First do No Groom”

You will EAT ZE BUGS (still)

“Young people who menstruate.” Like WOMEN, for example? Young WOMEN.

“The minute you start seeing your obstacles as things that are made for you, to give you what you need, then life starts to get fun, right? You start surfing on top of your problems instead of living underneath them.”

“I love the whole world, I love God and Jesus and I love my family.”

“It’s hard not to love humanity on days like these.”

“Had I known what they did to those black guys, I would’ve killed every last f**king one of them.” Looking in his eyes I knew he meant every word.”

After School Special: Lindsay Anderson and If….

What a Fool Believes

A Land of Selective Laws

At the Back, but not on the Bus