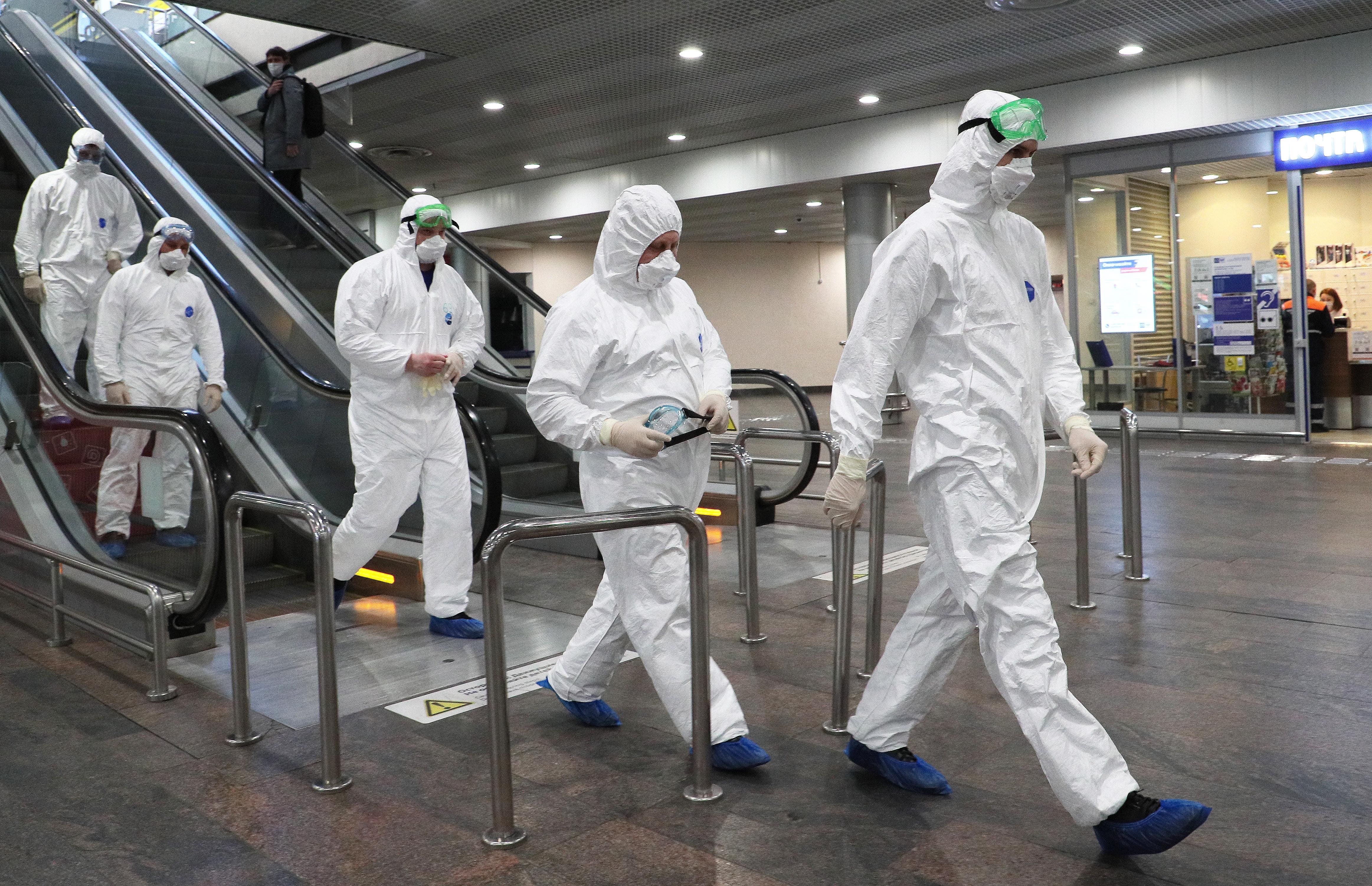 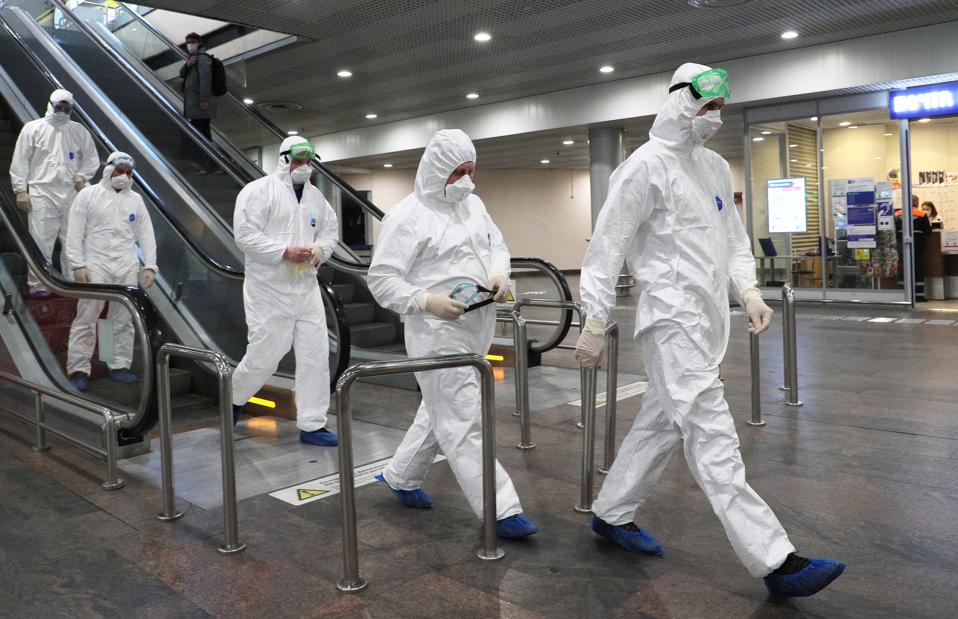 Workers in protective suits at the Sheremetyevo International Airport before meeting Russian … [+] nationals arriving from New York on an Aeroflot repatriation flight.

Once airports and borders open again and people are able to fly freely — a process already in play as airports of all sizes around the world ready strategies to ensure healthy air travel — how much are you ready to change your flying habits?

Considering some of the changes already happening and the many more recommended before airports can reopen safely to commercial routes, some experts are referring to the coronavirus pandemic as ‘the new terrorism,’ triggering thethe biggest crisis the airline industry has ever faced.

Let’s start with the entire process of checking in for flights, which experts calculate could take up to four hours and involving social distancing, sanitation of passengers and luggage, wider spaces for various lines and waiting to board.

Nine out of 10 experts expect slower turnarounds between flights due to the need of thorough cleaning of cabins and following of sanitary measures at airports.

In the short run, though, it’s expected that reduced passenger numbers and airlines traveling to a smaller pool of destinations may reduce delays. 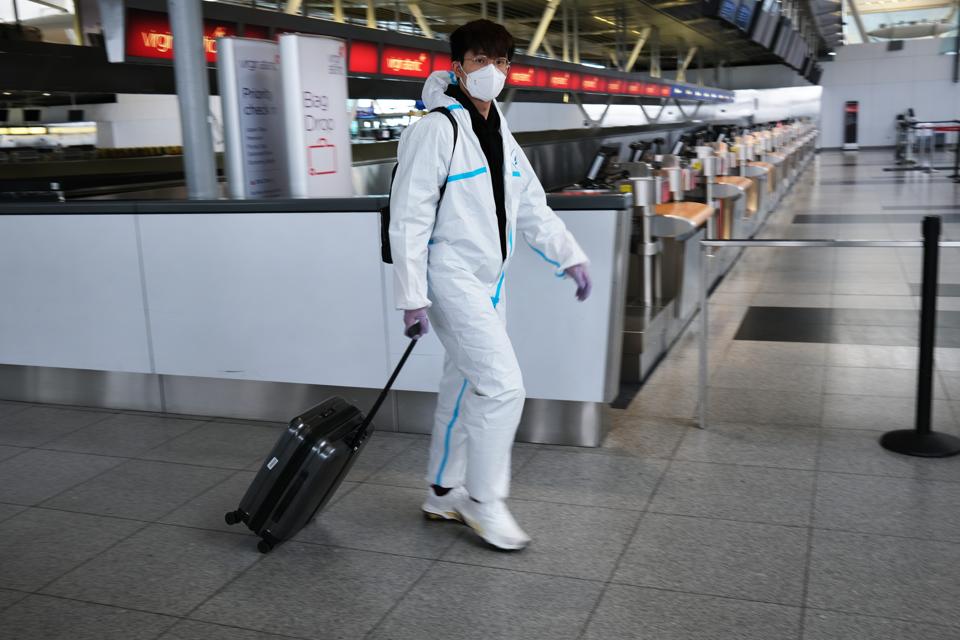 A person walks through a near empty John F. Kennedy Airport where some national and international … [+] flights are still departing and arriving, although many have been cancelled due to a lack of passengers and restrictions on global travel.

What You Can Expect

Digital technologies and automation will play a critical role in the future of air travel. The need to reduce “touchpoints” at airports implies mandatory use of biometric boarding that allows passengers to board planes with only their face as a passport.

A number of airlines including British Airways, Qantas and EasyJet already are using the technology.

According to the World Travel and Tourism Council (WTTC), “the ‘new normal’ at major airports, such as Heathrow, JFK and Singapore Changi will include almost exclusive use of online check-ins, and contactless payments.

Then there are the radical changes the airports will have to make starting most probably with stopping non-fliers from entering at all except for unaccompanied minors or others who need assistance.

They will need more extensive all-biometric check-in systems and efficient DYI for dropping off bags, ‘travel bubbles,’ or tunnels for disinfection. (After being checked in, luggage may also be put through a disinfection fogging tunnel). They also must install demarcation of the spaces for social distancing in corridors and concourses, larger spaces for queues and waiting, plexiglass or other protective barriers at customer service counters, hand sanitation stations and thermal scanning to check crowds for fever-grade body temperatures, which already are in use in some major airports.

“Only those ‘fit to fly’ will be allowed to enter,” predicts the airline strategy firm SimpliFlying, in a recent report, where it identifies more than 70 different areas in the passenger journey that “are expected to either change or to be introduced from scratch, including having bags ‘sanitagged’ after going through fogging, electrostatic or UV-disinfection to restore confidence in flying after COVID-19.”

The Telegraph explains that “it may sound futuristic, but UV sanitation is likely to become commonplace at the world’s airports. London Heathrow says it is to begin trialling the process for its security trays.” 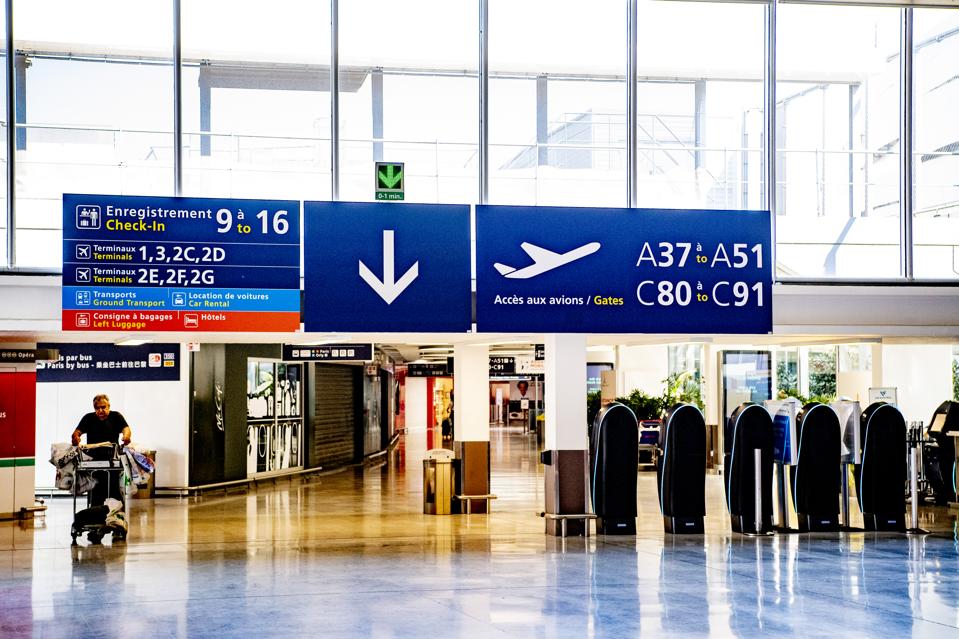 And then comes boarding

The boarding process is expected also to become ‘touchless,’ with options including facial recognition, already used in some U.S. airports for international flights. On the planes, there will be blocked seats, electrostatic spraying, personnel in protective gear and, of course, masks. Major European carriers such as Air France and KLM already have made them compulsory and it’s expected that all other airlines will do the same.

As for food, the tendency is to stop serving altogether on short-haul flights, while the airlines consider ‘light refreshments’ for long-haul flights. Hong Kong Airlines has decided to stop offering food altogether.

At the arrival point, SimpliFlying forecasts, international passengers will need to show some type of immunity document/passport, also advocated by the International Air Transport Association, IATA, to border control agents. Once a vaccine has been found, that could shift to a proof of vaccination.

“Arriving passengers will also undergo another temperature screening at their final destination and potentially even blood tests for COVID-19,” Conde Nast predicts. “Some airports like Hong Kong and Vienna are testing passengers for the coronavirus with a blood test before they are allowed to enter the country. Those types of tests, however, might be short-lived.”

Thermal testing is also recommended by IATA, “while Airlines UK, which represents British Airways, EasyJet and Virgin Atlantic, has said ‘pre-screening’ of travelers should be introduced ideally as early in the passenger journey as possible,” reports The Telegraph.

Although there are no standard decisions about making such tests and screening mandatory, airports and airlines are pushing for uniform regulations. It’s not clear who will be responsible for checking travelers’ temperatures and other Covid-19 symptoms, for example.

SimpliFlying predicts that a new federal health agency likely will be created to coordinate health screenings inside airports.

As immediately following 9/11, a process of trial-and-error is likely, with many airports and airlines following what some ‘pioneers’ establish.

“There will be new protocols for check-in involving digital technology; hand sanitizer stations at frequent points including where luggage is stored; contactless payment instead of cash; using stairs more often than lifts where the two-meter-rule can be harder to maintain; and fitness equipment being moved for greater separation, among other examples,” the WTTC wrote in a recent report.

The international institution says that the sector will face a gradual return to travel over the coming months as a “new normal” emerges before a vaccine becomes available on a mass scale, large enough to inoculate billions of people.

Travel is likely to return first to domestic markets with “staycations,” then to a country’s nearest neighbors before expanding across regions, and then finally across continents to welcome the return of journeys to long-haul international destinations. WTTC believes that younger travelers in the 18-35 age group, who appear to be less vulnerable to COVID-19, also may be among the first to begin traveling again.

According to Gloria Guevara, WTTC President & CEO, traveling in the ‘new normal’ age requires coordinated actions, including new standards and protocols, “for a safe and responsible road to recovery for the global Travel & Tourism sector as consumers start planning trips again.”