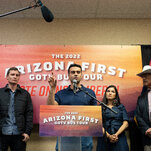 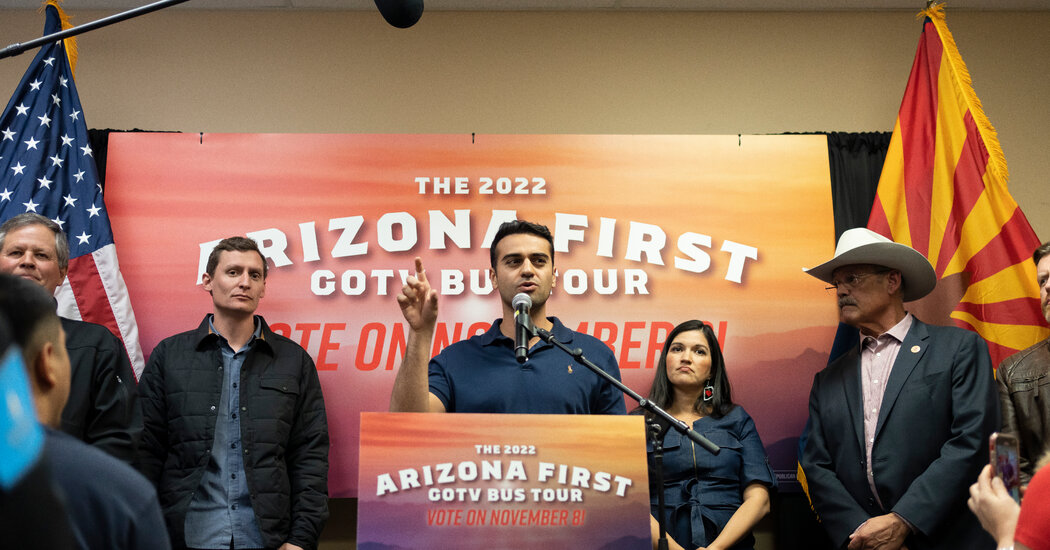 The candidate, Abe Hamadeh, alleged that local and state officials had mismanaged the Nov. 8 election.

Abe Hamadeh, the Arizona Republican locked in a tight race to become the state’s next attorney general, filed a lawsuit on Tuesday contesting the preliminary results of an election that had already been headed to an automatic recount.

The state’s final tally from the Nov. 8 election, which was set to be certified by counties by next week, has Mr. Hamadeh just 510 votes behind the Democratic candidate, Kris Mayes — 1,254,102 for Mr. Hamadeh and 1,254,612 for Ms. Mayes. That difference was within the margin needed to force an automatic recount under state law.

Mr. Hamadeh’s lawsuit, filed in State Superior Court in Maricopa County, names as defendants Arizona’s secretary of state — Katie Hobbs, a Democrat who won the governor’s race — as well as the county recorders and boards of supervisors in the state’s 15 counties. The Republican National Committee joined Mr. Hamadeh in the suit as a plaintiff.

Mr. Hamadeh and the R.N.C., in their complaint, ask the court to issue an injunction prohibiting the secretary of state from certifying Ms. Mayes as the winner and an order declaring Mr. Hamadeh the winner. The suit argues that equipment failures and errors in the management of polling places and in ballot tabulation led to an incorrect final vote count. It says there was no “fraud, manipulation or other intentional wrongdoing,” but it claims there were mistakes that affected the final tally, given the contest’s narrow margin.

The suit asks the court to allow additional votes to be counted, including 146 provisional ballots and 273 mail-in ballots that were segregated because the election system showed they came from voters who had already cast in-person ballots. It does not seek a rerun of the election, though it does claim that Mr. Hamadeh should be declared the winner. By state law, Arizona’s secretary of state is required to certify the results of the election by Dec. 5.

The Aftermath of the 2022 Midterm Elections

A moment of reflection. In the aftermath of the midterms, Democrats and Republicans face key questions about the future of their parties. With the House and Senate now decided, here’s where things stand:

Biden’s tough choice. President Biden, who had the best midterms of any president in 20 years as Democrats maintained a narrow hold on the Senate, feels buoyant after the results. But as he nears his 80th birthday, he confronts a decision on whether to run again.

Is Trump’s grip loosening? Ignoring Republicans’ concerns that he was to blame for the party’s weak midterms showing, Donald J. Trump announced his third bid for the presidency. But some of his staunchest allies are already inching away from him.

G.O.P leaders face dissent. After a poor midterms performance, Representative Kevin McCarthy and Senator Mitch McConnell faced threats to their power from an emboldened right flank. Will the divisions in the party’s ranks make the G.O.P.-controlled House an unmanageable mess?

A new era for House Democrats. Speaker Nancy Pelosi, the first woman to serve in the post and the face of House Democrats for two decades, will not pursue a leadership post in the next Congress. A trio of new leaders is poised to take over their caucus’s top ranks.

Divided government. What does a Republican-controlled House and a Democratic-run Senate mean for the next two years? Most likely a return to the gridlock and brinkmanship that have defined a divided federal government in recent years.

Arizona has come into the spotlight as one of the last battlegrounds of the 2022 midterms for those who have long made false accusations about the integrity of election systems. Kari Lake, the Republican candidate for governor, has vowed to keep fighting even as the election results show she lost by more than 17,000 votes. Her campaign has explicitly called for the election to be conducted again.

Both she and Mr. Hamadeh have pointed to problems on Election Day in Maricopa County, which includes Phoenix.

Widespread vote tabulation problems, caused by improperly printed ballots, occurred in the county. Ms. Lake and Mr. Hamadeh have claimed that their voters were disenfranchised by the problems, while county officials say every voter was given an opportunity to cast a ballot. A review by The New York Times of voter, poll worker and poll monitor testimonies from Ms. Lake and her allies found that while voters were inconvenienced with long wait times, most said they had still cast their ballots.

Mr. Hamadeh’s lawsuit appears to be narrowly worded to apply to the attorney general’s race, rather than making widespread allegations of election failure that would have implications for the governor’s race and its much larger margin.

Representatives of some of the offices being sued, including the Arizona secretary of state and Maricopa County’s board of supervisors and recorder, declined to comment. Mr. Hamadeh also declined to comment, as did his Democratic opponent, Ms. Mayes. A lawyer and a spokeswoman for the Lake campaign did not respond to requests for comment.

Speaking on MSNBC on Tuesday night, Ms. Mayes did not address the lawsuit but expressed confidence that she would emerge victorious, saying that “for the most part, recounts don’t end up overturning elections.”

In a tweet about his lawsuit on Tuesday, Mr. Hamadeh, a former prosecutor in Maricopa County, wrote, “I will not stop fighting until ALL voters receive justice.” Ronna McDaniel, the chairwoman of the R.N.C., said on Twitter, “We’re going to court to get the answers voters deserve.”