WASHINGTON — Congressional Republicans, caught flat-footed by an election-year groundswell of public support for overhauling policing in America to address systemic racism, are struggling to coalesce around a legislative response.

Having long fashioned themselves as the party of law and order, Republicans have been startled by the speed and extent to which public opinion has shifted under their feet in recent days after the killings of unarmed black Americans by the police and the protests that have followed. The abrupt turn has placed them on the defensive.

Adding to their challenge, President Trump has offered only an incendiary response, repeatedly invoking “law and order,” calling for military and police crackdowns on protesters, promoting conspiracy theories, and returning time and again to the false claim that Democrats agitating for change are simply bent on defunding police departments.

On Tuesday, Republicans on Capitol Hill rushed to distance themselves from that approach, publicly making clear that they would lay out their own legislation and refraining from attacking a sweeping Democratic bill unveiled this week aimed at combating racial bias and excessive use of force by the police. The measure, which House Democrats plan to push through this month, would make it easier to track, prosecute and punish police misconduct, ban chokeholds and restrict the use of deadly force by officers, as well as condition federal grants on anti-bias training and other practices to combat racial profiling and discrimination.

Senator Mitch McConnell, Republican of Kentucky and the majority leader, pressed on whether his party would embrace such steps, said on Tuesday that Republicans had yet to fashion their response.

“We are still wrestling with America’s original sin,” Mr. McConnell told reporters on Capitol Hill. “We try to get better, but every now and then, it is perfectly clear we are a long way from the finish line. And I think the best way for Senate Republicans to go forward on this is to listen to one of our own who has had these experiences.”

He said that he had tasked the Republicans’ lone black member, Tim Scott of South Carolina, to lead a group of senators to draft a conservative response that they could get behind. Ignoring repeated questions from reporters about Mr. Trump’s views, Mr. McConnell said senators would pursue “what we think is the appropriate response,” a notable shift from his customary refusal to bring up any legislation without an assurance that the president would embrace and sign it.

In the House, a group of Republicans on the Judiciary Committee — led by Representative Jim Jordan of Ohio — was looking at its own plans to reimagine police training, increase accountability for officers who use improper force or violate the rights of civilians, and collect new data to track the behavior by departments across the country.

But privately, Republican lawmakers and aides conceded they had few proposals ready to offer and were instead racing to reach a consensus about how to proceed. Late Tuesday afternoon, Mark Meadows, the White House chief of staff, rushed to Capitol Hill with Jared Kushner, Mr. Trump’s son-in-law and senior adviser, to huddle with Republicans about what they could quickly agree on.

Mr. Meadows told reporters after that meeting that Mr. Trump was in favor of overhauling policing laws “sooner rather than later.” But he declined to name any specific legislative priorities the White House would support, saying the administration would be “responsive” to suggestions made by “stakeholders” on Capitol Hill.

The dilemma for Republicans is urgent. For decades, their party has been built on the legacy of the “Southern strategy,” in which candidates sought to win over onetime Democrats by portraying themselves as tough on crime and disorder.

Over the years, some Republicans have used the issue to traffic in racial stereotypes and fear-mongering, like when George Bush and his supporters highlighted the case of a black murderer named Willie Horton, who raped a white woman and assaulted her boyfriend while on a prison furlough, to portray Gov. Michael S. Dukakis of Massachusetts, his Democratic presidential rival, as insufficiently tough on crime.

Mr. Trump has sought to stir up white grievance as well, calling immigrants criminals, berating professional African-American football players for kneeling during the national anthem, and calling protesters of police brutality against black Americans “thugs.” But polls now show that huge majorities of the country, including whites, believe that policing must change.

“In every survey, you see intensity, determination and unity among African-Americans that the time for statements is done and the time for meaningful, measurable action is now,” said Frank Luntz, a Republican pollster and messaging consultant. “The turning point is among white respondents, who not only acknowledge that injustice has happened, but now also agree that action, not words, are necessary.” 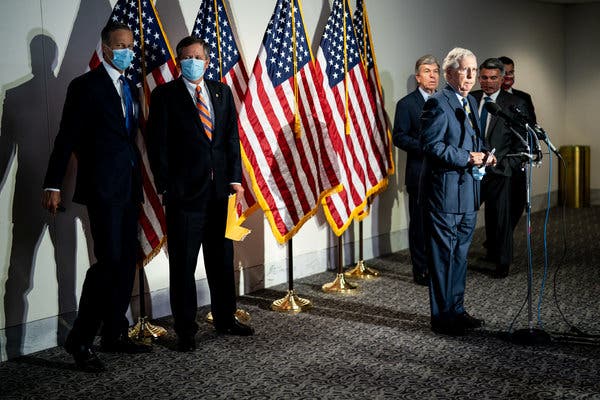 Senator Mitch McConnell, Republican of Kentucky and the majority leader, generally refuses to allow legislation to receive a vote on the floor unless he knows President Trump will back it.Credit…Erin Schaff/The New York Times

It is yet unclear what kind of action Mr. Trump, who has embraced law enforcement as he eyes an increasingly treacherous political landscape, might be willing to support. Trying to polarize the electorate before the fall campaign, the president instead has spent much of the past two days posting messages on Twitter that called for “LAW & ORDER.” And, on Tuesday morning, he veered into the conspiratorial, claiming that a 75-year-old protester shoved violently to the pavement and injured by Buffalo police officers could have been “a set up.”

Uncertainty about whether Mr. Trump would ultimately sign a bill could create havoc down the line, when Republicans on Capitol Hill put forward a proposal that the White House does not like.

For example, some congressional Republicans have voiced an openness to changing the legal doctrine known as qualified immunity that shields police officers from being held legally liable for damages sought by citizens whose constitutional rights were violated.

Senator Mike Braun of Indiana said he was interested in revisiting the issue, even though a day earlier, Kayleigh McEnany, the White House press secretary, said the issue was likely to be a “nonstarter” and noted that Attorney General William P. Barr, who embodies the tough-on-crime approach Republicans traditionally embrace, was opposed.

“That’d be the one thing that shows our conference means business,” Mr. Braun said. “You never know, this might be a watershed moment.”

The prospect of a messy intraparty split is one reason that Mr. McConnell generally refuses to bring up legislation that has not been preapproved by Mr. Trump, but Republicans appear to see more potential risk in waiting around for the White House to move than in crossing the president.

“We are on a separate track from the White House,” Mr. Scott told reporters, a few hours before meeting on Capitol Hill with Mr. Meadows and Mr. Kushner.

Republicans are also feeling pressure from a newly confident Democratic Party, which believes it has finally reclaimed ground when it comes to public trust around law and safety. Many of them fear that Democrats will brand any compromise that Republicans would be willing to accept as insufficient, and use the issue instead to score political points in an election year that appears increasingly promising for them.

In a brief interview on Tuesday, Speaker Nancy Pelosi said she saw no reason that Republicans should not support the Democrats’ bill if the public does. She compared the political dynamic with gun safety, where Republicans have seen public opinion surpass their appetite to legislate and the difference undermine them electorally in suburban America.

“I hope it is better than what they did on their own proposal with gun safety,” she said of whatever Mr. McConnell and Mr. Scott were putting together.

On Wednesday, the Democratic-led House Judiciary Committee will hold a hearing examining the changes proposed in their legislation. Philonise Floyd, the brother of George Floyd, will testify. A House vote is expected by the end of the month.

With pressure mounting, a number of Senate Republicans indicated during a private luncheon on Tuesday that they were eager to pass some sort of overhaul package. Senator Tom Cotton, Republican of Arkansas, who has recently made the case for the military to be brought in amid the protests, stood to urge his colleagues to be “sensitive” to the experience that black men have with law enforcement and called on lawmakers to change that relationship, according to two people familiar with the private comments.

“Judging by emails, phone calls to the office and conversations, there’s a great sense of sorrow regarding George Floyd’s death,” Mr. Cassidy said. “One law enforcement officer told me that big departments cannot reform from within. They need an external influence for accountability.”

Mr. Scott shared a preliminary proposal during the lunch, but lawmakers said it would continue to evolve.

Like the Democrats’ bill, Mr. Scott’s would make lynching a federal hate crime, allocate new funds to promote the use of police body cameras and potentially penalize those who do not use them, set up a national police commission study to determine the national best practices for policing and push law enforcement agencies to report more data on the use of force by officers.

But there were key differences as well, in line with a conservative philosophy that states and cities should have control over their forces. Mr. Scott said the Democrats’ legislation bordered on “a nationalization of some of the underlying issues or techniques” that he would reject. And he said that while he shared the goal of outlawing techniques like chokeholds and “no knock” warrants in drug cases, he preferred collecting data to better understand their use to Democrats’ proposed ban.

“Time is of the essence,” Mr. Scott told reporters. “I think it is important for this nation to take a very powerful stand and position that says, look, we’re hearing and we’re reacting in a very positive, constructive manner that doesn’t create a binary choice between supporting law enforcement and supporting communities of color.”

Representative Kevin McCarthy of California, the House Republican leader, has privately indicated that his conference could support proposals to collect more data about instances of police misconduct, create new training standards for officers on the use of force, and give departments the ability to more easily fire problematic officers, according to people familiar with his thinking.