WASHINGTON — When Senator Mitt Romney of Utah strode into a luncheon with fellow Republicans last week, he was carrying an oversize poster in his black-gloved hand that bore a blunt message: “Blue states aren’t the only ones who are screwed.”

Two days later, Senator Rick Scott of Florida made the opposite point, arriving at another party gathering with his own placard that showed how rosy his state’s financial picture was compared with those of three Democratic states: New York, Illinois and California. Why should Congress help struggling states and cities, he argued, when the bulk of the aid would go to Democratic strongholds that he said had a history of fiscal mismanagement?

The two Republican senators — both former governors — illustrate the contentious debate within their party that is shaping the next sweeping package of federal coronavirus relief. With many states and cities experiencing devastating fiscal crises amid the pandemic, Democrats in Congress have joined governors and mayors in pressing for a huge infusion of money for troubled states, cities and towns.

On Monday, the Democratic governors of five western states — California, Colorado, Oregon, Nevada and Washington State — said that all 50 states would need $1 trillion in “direct and flexible relief.”

President Trump has not ruled out sending additional money to states. But he has gone after Democratic governors, accusing them of mismanaging their finances, and charged that the party’s members in Congress “want help — bailouts — and, you know, bailouts are very tough. And they happen to be Democrat states.”

“The Republican states are in strong shape,” he said last month. “I don’t know — is that luck or is that talent?”

On Monday, Mr. Trump again accused Democratic states of dragging their feet on reopening their economies. “There just seems to be no effort on certain blue states to get back into gear,” he said.

States are suffering from a collapse in sales and other tax revenue, even as they face enormous new costs for health care, emergency medical services, jobless aid and other safety net programs. Without more support, the Western governors warned, states would have to make “impossible decisions” such as whether to fund public health care programs or lay off teachers, police officers, emergency medical workers and firefighters.

While the federal government can run budget deficits, states do not have that option.

Republicans are divided over whether to help at all and how much aid to provide, as well as what conditions to place on the money. Much of the dispute — unfolding just months before the November elections in which control of the Senate is at stake — is being driven by the political bent of the states that stand to benefit or lose.

Mr. Trump has said that “we’re in no rush” to produce another round of federal pandemic relief, and branded Democrats “stone-cold crazy.”

If such a package materializes, Kevin Hassett, one of Mr. Trump’s senior economic advisers, told CNN on Sunday, “I think President Trump has signaled that while he doesn’t want to bail out the states, he’s willing to help cover some of the unexpected Covid expenses that might come their way.”

Republicans like Mr. Romney are pushing for a substantial infusion with few restrictions, arguing that the money is desperately needed throughout the country, not only in predominantly Democratic places. His poster, which showed an analysis published by Slate using data from Moody’s Analytics, showed that a number of Republican states — including Louisiana, Kansas and Kentucky — are likely to face some of the largest budget shortfalls, in part because of a loss of tax revenue and use of state rainy day funds.

Large state budget shortfalls could prolong a recession, economists have said, by prompting a cascade of layoffs that ripple across the economy. In April, state and local governments laid off one million people, a number that could continue to climb without additional assistance.

“This is not a partisan issue,” said Lee Saunders, the president of the American Federation of State, County and Municipal Employees. “This is not a red or blue issue. This is an issue about providing essential services to the people that rely upon them — and that’s the entire country.”

But Mr. Scott and other Republicans want to place strict limits on any funding to steer it away from heavily Democratic states, such as barring aid from being used to cover pension obligations. That would disadvantage states like California, Illinois and New York, whose huge obligations to public employee pension systems are worsening their financial problems. The Democratic leader of the Illinois Senate, for instance, has asked Congress for a more than $40 billion lifeline, including $10 billion to bolster the state’s pension system. 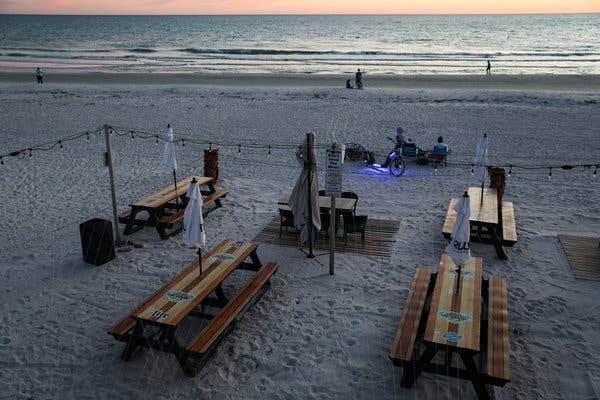 Empty tables at a restaurant in Florida last week. Senator Rick Scott of Florida argued against sending aid to states.Credit…Eve Edelheit for The New York Times

Senator Mitch McConnell, Republican of Kentucky and the majority leader, initially indicated he would rather see states go bankrupt than send them additional federal money, but he has since signaled that he would be open to more funding, provided it could not be used to address problems that existed before the pandemic. And while Mr. Trump has indicated that he is willing to consider more state and local aid, he has also made plain that he does not relish the idea of helping states that elect Democrats.

“Why should the people and taxpayers of America be bailing out poorly run states (like Illinois, as example) and cities, in all cases Democrat run and managed, when most of the other states are not looking for bailout help?” Mr. Trump tweeted last month. “I am open to discussing anything, but just asking?”

Congress already allocated $150 billion to states as part of the $2.2 trillion stimulus law enacted in March, although restrictions imposed by the Treasury Department walled it off from being used for anything other than coronavirus-related expenses, which does not account for huge revenue losses resulting from the economic lockdowns.

And there are indications that the money has not been distributed equitably. An Associated Press analysis published last week found that based on the number of positive tests for the coronavirus, states with smaller populations — and not those considered the epicenters of the pandemic — received an outsize portion of aid. Hawaii received $2 million per positive test and Alaska nearly $3.4 million, the analysis found, whereas New York and New Jersey received about $24,000 and $27,000 per positive test, respectively.

Governors of both parties have urged their congressional delegations to approve more funding, arguing for flexibility in how they can use the aid. Alabama’s Legislature wants to spend a portion of its $1.8 billion on building a new Statehouse, according to local news reports. Some are pressing for a special tranche of funding specifically for communities of fewer than 500,000 people.

“The concerns of rural states need to be taken into account,” said Senator Susan Collins, Republican of Maine, in a brief interview. The stimulus law made it difficult for small communities to receive aid directly, she said, because the state is responsible for parceling out the aid.

“I certainly don’t want anything that says you have to be a certain size to get funding,” Ms. Collins added.

According to the United States Conference of Mayors, only 36 cities have qualified for direct federal assistance so far. On Tuesday, on a call arranged by the organization, a bipartisan group of mayors from Michigan, Ohio, Texas, Kentucky and Florida — all states that supported Mr. Trump in 2016 — plan to call for a large new infusion of federal money to cities of all sizes.

Senator John Kennedy, Republican of Louisiana, who compared restrictions on the previously allocated money to “handcuffs,” on Thursday attempted to push through legislation that would eliminate those guardrails, but maintain the prohibition against using the aid for pension programs. Mr. Scott, the Florida Republican, blocked the measure, arguing that Congress had “wisely placed limitations on how this money could be spent.”

House Democrats are preparing to unveil another sweeping coronavirus relief measure that would allow for another round of direct payments, an increase to food assistance programs and support for the Postal Service — proposals that they acknowledge will likely meet conservative resistance and may not survive in negotiations with the Senate. The centerpiece is expected to be aid for state, local and municipal governments, comparable to or eclipsing the nearly $700 billion that has been distributed to small businesses through a loan program created by the stimulus law.

“Republican and Democratic governors and mayors across the country support what we are doing with the state and local, honoring our heroes,” Speaker Nancy Pelosi of California said at a news conference on Thursday. “Viruses know no borders nationally, but they certainly don’t know any state borders.”

But Mr. McConnell has urged his colleagues to hit “the pause button,” raising concerns about the ballooning government debt. Although he has acknowledged that another tranche of state and local funding is likely, he has said there will be no such aid without protections against lawsuits for businesses calling workers back, citing it as his red line on future legislation.

Some Republicans, however, are pressing hard for the money. Senator Bill Cassidy, Republican of Louisiana, has introduced legislation with Senator Bob Menendez, Democrat of New Jersey, to distribute $500 billion to states across the country, and other senators have signaled their openness to another round of funds.

And many lawmakers in both parties may be loath to reject such proposals, given the dire straits of their state budgets and the widespread acknowledgment that the government’s response to the pandemic will be top of mind for voters in November.

“I think all of us are going to get our papers graded in November based on how we responded,” Senator John Cornyn, a Texas Republican seeking re-election, told reporters. “This is going to be the dominant issue in every election in the country.”