It took almost three weeks for the third presidential impeachment trial in the nation’s history to snake through the Senate, arriving at the final day of votes that brought a conclusion that from the beginning seemed foregone.

“Impeachment,” Ken Starr, one of the president’s defenders, had intoned during the trial, “is hell.”

A weary Senate appeared to agree and on Wednesday rendered its verdict, voting to acquit President Trump. Here’s a look at how we got here.

Impeachment Moves to the Senate 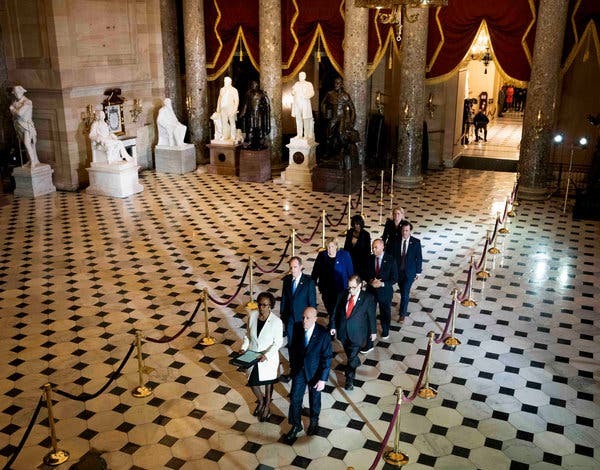 Ushering in the trial with the pomp and circumstance afforded only to what Alexander Hamilton called a “national inquest into the conduct of public men,” the Democratic impeachment managers marched in a choreographed procession from the House to the Senate to deliver the articles of impeachment.

Chief Justice John G. Roberts Jr. trekked across the street from the Supreme Court to the Capitol to preside over the trial as the White House defense team descended on the Senate, ready to argue its case.

Transforming from a legislative body to a court of impeachment required senators, aides and journalists to adapt to a new status quo, with new hours — usually beginning at 1 p.m. and stretching as late as 2 a.m. — and new rules.

For senators, that meant being stranded without their phones and in sitting silence for hours at a time on the Senate floor, an endeavor they struggled against by doodling, fidget-spinning and whispering or surrendered to sleepily. For journalists, it meant cramming into crowded pens instead of enjoying the usual free-roaming access to lawmakers.

Television cameras and photographers were not allowed inside the chamber, save for one operated by the government, limiting what the public could see and hear.

Among those most inconvenienced by the trial, however, were the Senate Democrats running for president, who found themselves wondering when they would be able to return to Iowa before the nation’s crucial first nominating contest. While Senator Bernie Sanders of Vermont made his annoyance clear, most tried to take it in stride.

“I don’t know how many days this is going to last,” Senator Amy Klobuchar of Minnesota said. “I just know that I have a constitutional duty to do my job.”

Before the opening arguments began, Senator Chuck Schumer of New York, the Democratic leader, laid an early test for Republicans. Would they vote to hear from additional witnesses and gather more evidence?

In an early sign of where the trial might be heading, Republicans roundly declined — and were left voting down measure after measure introduced by Mr. Schumer to hear more, a vote-a-rama that crawled into the bleary-eyed hours of the next morning.

Beginning the trial in earnest, the impeachment managers, led by Representative Adam B. Schiff of California, the chairman of the House Intelligence Committee, laid out the House’s case against Mr. Trump, casting him as a man “who would be a king.”

“President Trump solicited foreign interference in our democratic elections, abusing the power of his office by seeking help from abroad to improve his re-election prospects at home,” Mr. Schiff said. “And when he was caught, he used the powers of that office to obstruct the investigation into his own misconduct.”

Taking to the well of the Senate, Mr. Trump’s defense team furiously rebutted Mr. Schiff’s assertion, denouncing the case against the president as an “unlawful” attempt to deprive him of re-election.

“They’ve come here today and they’ve basically said, ‘Let’s cancel an election over a meeting with the Ukraine,’” said Pat A. Cipollone, the White House counsel. “It would be a completely irresponsible abuse of power to do what they’re asking you to do: to stop an election, to interfere in an election and to remove the president of the United States from the ballot.”

Then, one day before the White House team was set to conclude their opening arguments, a bombshell roiled the trial: John R. Bolton, the president’s former national security adviser, wrote in his unpublished manuscript that Mr. Trump told him directly that he wanted to continue freezing military aid to Ukraine until officials there helped with investigations into Democrats — exactly what the articles of impeachment accused the president of doing.

The account, first reported by The New York Times, suddenly created a question: Would the new disclosure prompt a critical mass of Republicans to demand to hear from Mr. Bolton or other witnesses?

After being held hostage for days to the rhetorical whims of the impeachment managers and the president’s defense team, senators seized on the opportunity to pepper each side with questions.

Parsing each question for subtext, an eager press corps eyed each question carefully searching for hidden meaning that might convey what tight-lipped senators might be thinking.

As the trial crescendoed, inching closer to a vote to hear from witnesses like Mr. Bolton, the pressure on a handful of moderate Republican senators, like Senator Lisa Murkowski of Alaska and Senator Lamar Alexander of Tennessee, who is not running for re-election in 2020, reached a fever pitch. Facing pressure from both their own party to hold the line, and from Democrats who found hope in each vague statement the lawmakers issued, they remained stone-faced.

Senate Republicans leaving the Strom Thurmond room after a meeting to discuss the next steps in the trial.Credit…Erin Schaff/The New York Times Reporters taking note during a news conference.Credit…Alyssa Schukar for The New York Times

But by last Friday night, the outcome had become clear: Senate Republicans would hold together to turn back a plea to hear from Mr. Bolton and other witnesses. With those votes cast, the end of the trial began to neatly fall into place, cemented by a victorious thumbs-up from Senator Mitch McConnell of Kentucky, the majority leader.

Senator Susan Collins of Maine announced she would vote to acquit in both articles of impeachment before attending the State of the Union.Credit…Erin Schaff/The New York Times At the end of Mr. Trump’s speech, Ms. Pelosi ripped the pages of the State of the Union address and called it a “manifesto of mistruths.”Credit…Doug Mills/The New York Times

Taking a victory lap in the chamber where it began, Mr. Trump delivered a confident State of the Union address Tuesday night from the House floor, basking in the applause of Republicans — and prompting Speaker Nancy Pelosi to rip up his remarks in a display of defiance.

On Wednesday, Mr. McConnell delivered the president his acquittal, and after three weeks, the trial was over.