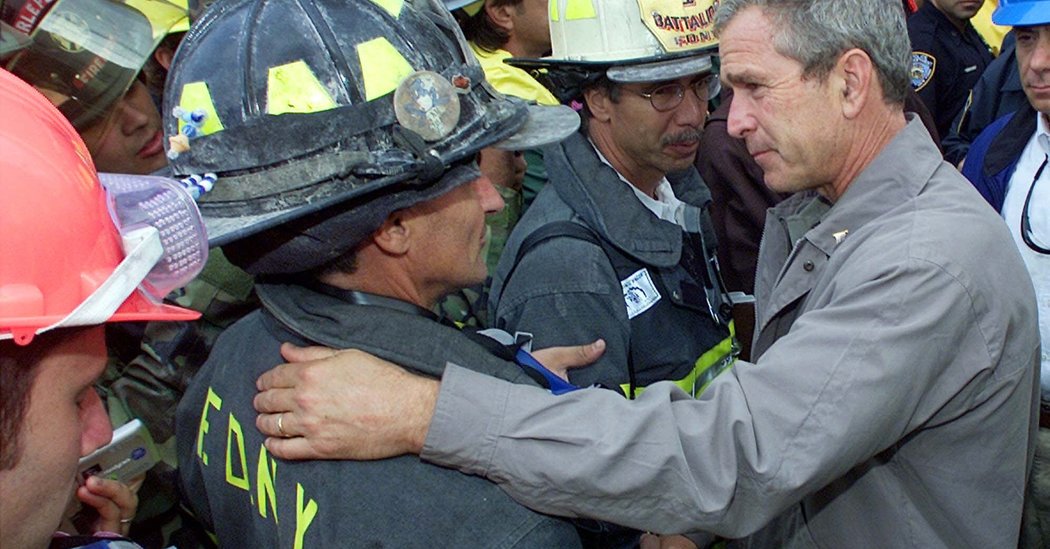 WASHINGTON — Former President George W. Bush called on Americans on Saturday to put aside partisan differences, heed the guidance of medical professionals and show empathy for those stricken by the coronavirus and the resulting economic devastation.

In a three-minute video message, Mr. Bush, who rarely speaks out on current events, struck a tone of unity that contrasted with the more combative approach taken at times by President Trump as the former president evoked the sense of national solidarity in the wake of the attacks of Sept. 11, 2001.

“Let us remember how small our differences are in the face of this shared threat,” Mr. Bush said in the professionally produced video set against music and photographs of medical workers helping victims of the virus and of ordinary Americans wearing masks. “In the final analysis, we are not partisan combatants. We are human beings, equally vulnerable and equally wonderful in the sight of God. We rise or fall together and we are determined to rise.”

Former President Bill Clinton also delivered a message, speaking into a camera in what looked like a video chat from his home. “We need each other, and we do better when we work together,” he said. “That’s never been more clear to me as I have seen the courage and dignity of the first responders, the health care workers, all the people who are helping them to provide our food, our transportation, our basic services to the other essential workers.”

Mr. Trump has declined to call on his predecessors to help bring the country together during the pandemic, which has now claimed more than 66,000 lives in the United States and put more than 30 million people out of work. Past presidents made a point of enlisting former occupants of the White House from both parties in times of crisis to demonstrate national resolve and unity.

Mr. Trump, for his part, has dismissed the idea of calling his predecessors for help, either to participate or even to offer advice. “I don’t think I’m going to learn much,” he said when asked about the idea in March. “I guess you could say that there’s probably a natural inclination not to call.”

Mr. Bush has never been a fan of his fellow Republican president. Mr. Trump defeated his brother, Jeb Bush, for the nomination in 2016 and has lambasted the 43rd president’s record repeatedly. Mr. Bush refused to support Mr. Trump that fall, saying he had voted for “none of the above” instead. While disturbed by Mr. Trump’s leadership, Mr. Bush has largely kept quiet since then with a couple of notable exceptions, such as a speech in New York and a eulogy for Senator John McCain that were seen as implicit rebukes of the incumbent.

In his video message on Saturday, Mr. Bush recalled the difficult days after Sept. 11. “Let us remember, we have faced times of testing before,” he said as images flashed on the screen of him comforting relatives of those killed in the attacks. “Following 9/11, I saw a great nation rise as one to honor the brave, to grieve with the grieving and to embrace unavoidable new duties. And I have no doubt, none at all, that this spirit of service and sacrifice is alive and well in America.”

Mr. Bush also called for compassion, a trait that Mr. Trump has largely eschewed during the pandemic in favor of demonstrating what he considers strength and optimism. “Let us remember that empathy and simple kindness are essential powerful tools of national recovery,” Mr. Bush said. And he added: “Let’s remember that the suffering we experience as a nation does not fall evenly.”